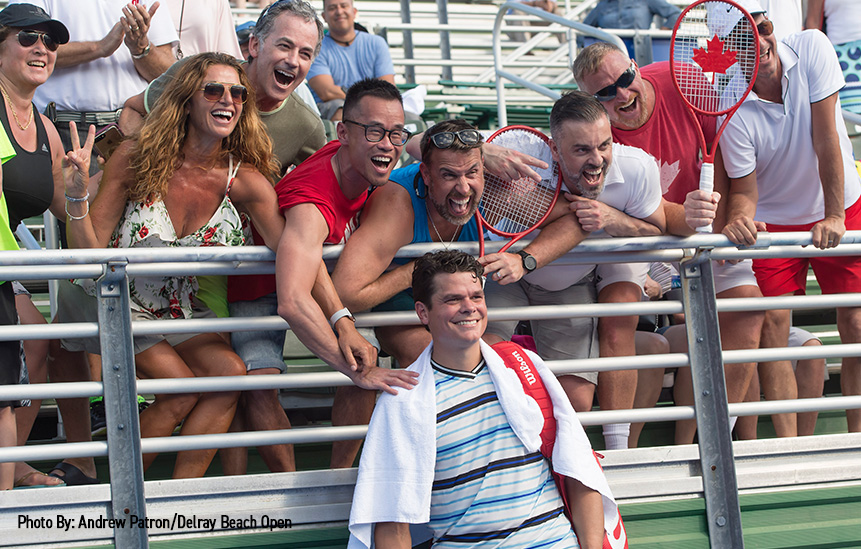 DELRAY BEACH, Fla. – Tuesday was billed as Canada Day at the ATP World Tour Delray Beach Open, and Milos Raonic and Denis Shapovalov didn’t disappoint their fellow citizens in attendance in the Stadium at the Delray Beach Tennis Center.

Raonic and Shapovalov each delivered straight-sets victories in their first-round matches Tuesday afternoon after American John Isner, the No. 6 seed here this week, rallied from down a set to defeat Radu Albot of Moldova 5-7, 6-3, 6-4 in the opening match of Day 2.
The world No. 18 Isner, a wild card entry in the singles draw, was the highest ranked player in action during the afternoon session. The 6-foot-10 American lost to Albot, ranked No. 87 in the world, at last week’s New York Open but was able to stave off another upset thanks in part to 21 aces, compared to only one for Albot.

Isner was down 3-1 in the first but broke back and was up 5-4 before Albot won three straight games to take the opening set.

“I was disappointed to lose that set 7-5. That would have been very encouraging to win that 6-4, but I was able to get up early in the second set,” said Isner, who won the first three games of the second set to reclaim the momentum.

It’s only the second win in five matches this season for Isner, who acknowledged that he’s been slow to find his game early in the season the past few years, and Albot presents a challenging opponent.
“He makes a lot of balls, makes a lot of returns too. Especially in the first set,” Isner said of Albot. “I wasn’t getting many free points on my serve and it’s very windy, and when you haven’t played many matches like I haven’t it’s tough to get your footwork. You can practice it all you want but the best way to continue to play better is by winning real live matches.”

The afternoon, however, really belonged to the Canadians. Raonic, who is ranked No. 32 in the world and is the No. 9 seed in Delray, opened the Canadian double-header with a 6-1, 7-5 win against Taro Daniel of Japan.

“It gives me a lot of things that I believe I can do better tomorrow,” Raonic said of his first win of the season after losing his opening matches at the Australian Open and Brisbane. “I’m just trying to get in as many wins as possible, that’s the most important thing, to scrap it out however.”

Raonic, who had to withdraw because of injury from his finals match against Jack Sock here last year, struggled in the wind with his first serve Tuesday but did deliver nine aces.

“I can serve better. I got a little bit too passive there at the beginning of the second set (trailed 3-1), so I’ve got to consistently be a bit more aggressive.”

“Ivo’s been around for so many years, it’s never easy playing a giant like him,” the 18-year-old Shapovalov said. “There’s no rhythm in the match. I just kept fighting and kept trying to win my serve and hopefully break him, and I was able to turn the match around. I’ve improved a lot in the last couple of months (and) every match I feel like I’m getting better and more experienced, but it’s definitely tough when you’re playing a guy that height with that level of a serve. I was just happy I was able to break him when I did. I definitely threw in too many double faults today.”

Shapovalov arrived here ranked No. 46 in the world and he said that the pro-Canadian crowd served as an inspiration to him during the match.

“It’s awesome to see all the fans. It’s huge for the tournament to do (Canada Day). I think it’s a really good idea,” said Shapovalov, who held up a Canadian flag to the crowd after his match. “It was awesome to see so many Canadians show up. It almost felt like a Davis Cup match.”

The other afternoon matches were contested on Court 1 and 4. Reilly Opelka, a wild card entry, ousted fellow American Ryan Harrison 7-6 (5), 7-6 (6). Two other Americans also registered wins. Steve Johnson advanced with a 6-3, 6-4 win against Nikoloz Basilashvili, and Jared Donaldson handed the other Canadian in action – “lucky loser” Peter Polansky – a 7-6 (6), 6-1 setback.