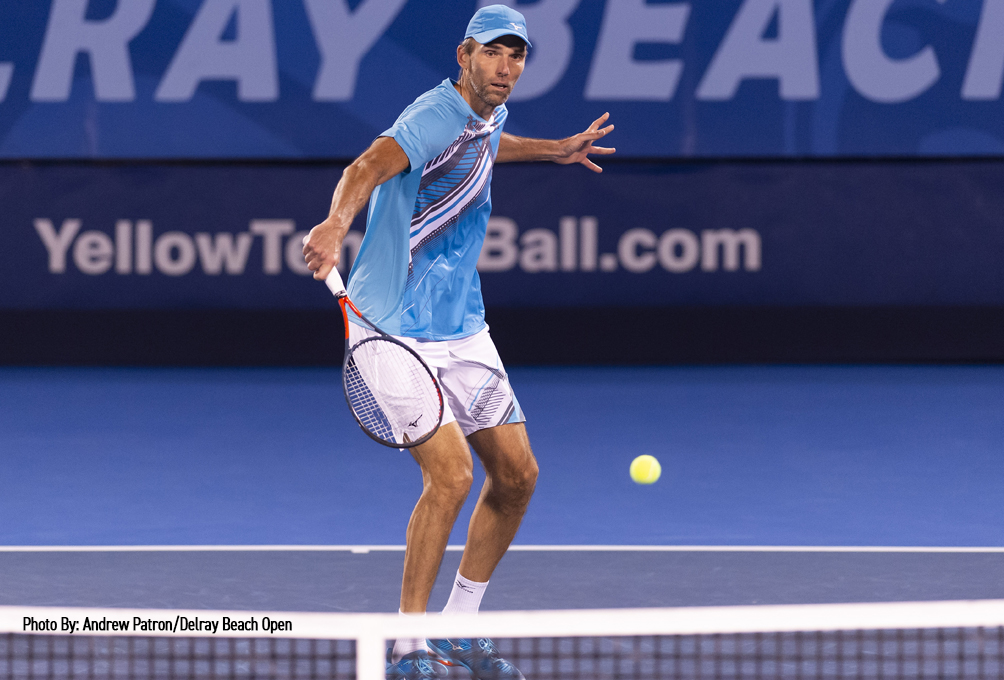 DELRAY BEACH, Fla. – Ivo Karlovic is not ready just yet to give in to Father Time.

Karlovic, who turns 42 next month, delivered that message Friday night when he won his first-round match at the Delray Beach Open by VITACOST.com, upsetting No. 7 seed and world No. 59 Pablo Andujar of Spain and establishing a couple records in the process.

Karlovic’s 6-3, 5-7, 6-4 victory on the Stadium Court at the Delray Beach Tennis Center eclipsed his own record as the oldest match winner on the ATP Tour since 42-year-old Jimmy Connors won his first two matches at Halle in 1995.

“Of course it’s special, even if it’s that age. In any sentence that you are with him, compared, it’s nice,” Karlovic said.

Karlovic arrived here ranked No. 148 in the world, a far cry from his career high of No. 14 that he achieved in 2008 after defeating No. 1 Roger Federer at the ATP Masters 1000 in Cincinnati. One of the premier servers in tennis history – he once delivered a 144-mph ace, second-fastest recorded in the sport’s history — the 6-foot-11 Croatia native who now lives in South Florida showed Friday night that his big serve still is dangerous and serves him well with the ball in his hand.

He smashed 27 aces against Andujar – extending his ATP Tour career record to 13,646 – and won 81 percent of his first-serve points. The 27 aces are a career-high for Karlovic in Delray Beach and tied for third-most in a match in the tournament’s history.

“It’s good. When you win, it’s always good,” Karlovic said of his serving proficiency. “It was pretty fast here. It’s always fast, but never like this. It’s really good for my game.”

Karlovic won the title here in 2015, beating Donald Young in the final, which was his last win in Delray. He ended that four-match losing streak Friday night.

“It’s really good. It’s always good when you win either way. I’m happy about that,” Karlovic said of snapping his losing streak here. “It does help that I know in the back of the head that I already won here. It’s always conditions that I like. But every match is different. . . . (Plus), my kids were in the stands, so I had to motivate myself.”

Karlovic next faces Roberto Quiroz, with a berth in the quarterfinals on the line. That’s where his concentration is now. As far as eclipsing Connors’ record as the oldest winner on the Tour, that’s something he’ll think about if and when the time comes.

“It would be nice to do next year, but that’s a long way to go,” he said, smiling.

American Frances Tiafoe completed the first round of competition with a 6-3, 6-4 win against fellow American Donald Young in Friday’s nightcap.

Tiafoe recorded four breaks of servce against Young on eight chances in the match.

“I’m just happy with the way I competed and won the bigger points tonight,” Tiafoe said. “I’ve been returning really well. I like the way I returned and put myself in positions to be able to break a lot.”

The world No. 62 Tiafoe won his only ATP Tour title in Delray Beach in 2018, becoming the only wild card champion in the event’s history. He reached the semifinals in his last tournament In November at Nur-Sultan, and is the No. 8 seed here this week. He next will meet fellow American Bjorn Fratangelo in the second round.