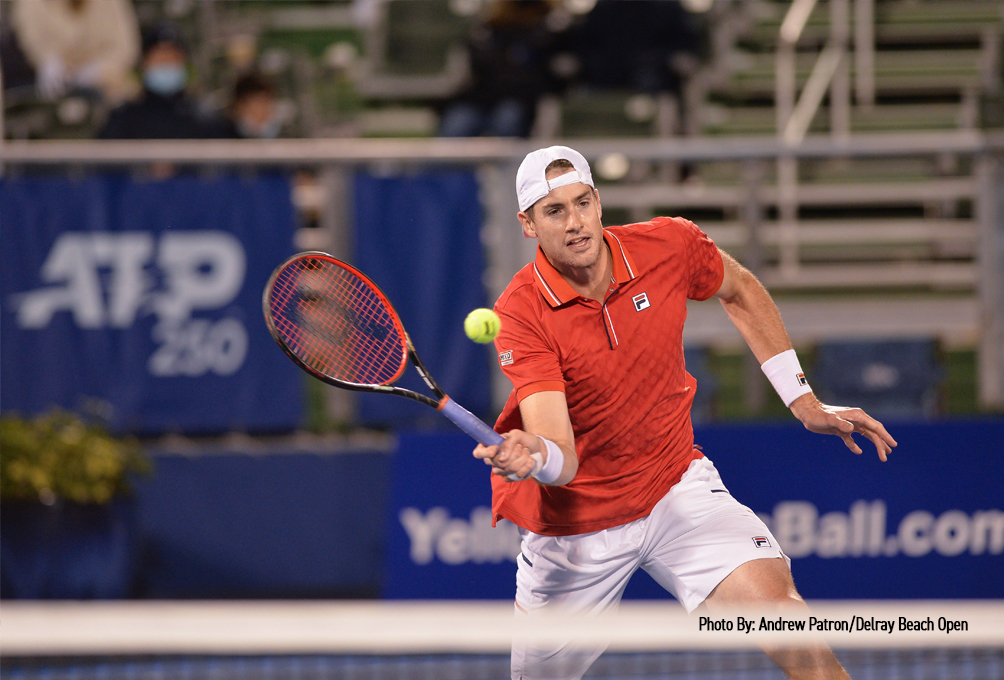 Four Americans will attempt to book their place in the Delray Beach Open presented by VITACOST.com semi-finals on Monday. At 35-years-old, veteran John Isner is joined by young guns Sebastian Korda, Frances Tiafoe and Christian Harrison in quarterfinal action. The showpiece match of Monday’s quarterfinals features a heavy weight bout between America’s most successful player in recent memory, Isner, against an emerging talent, Korda. Korda defeated fellow American rising star and Delray Beach No. 5 seed Tommy Paul in three sets to reach his first ATP Tour quarterfinal. The 20-year-old son of former world No. 2 and Australian Open champion Peter Korda, he made his ATP Tour breakthrough last year reaching the fourth round of Roland Garros, becoming the first American debutant to do so since 2001. His path to the final 16 in Paris included a win over Isner in the second round. Isner, the No.2 seed... 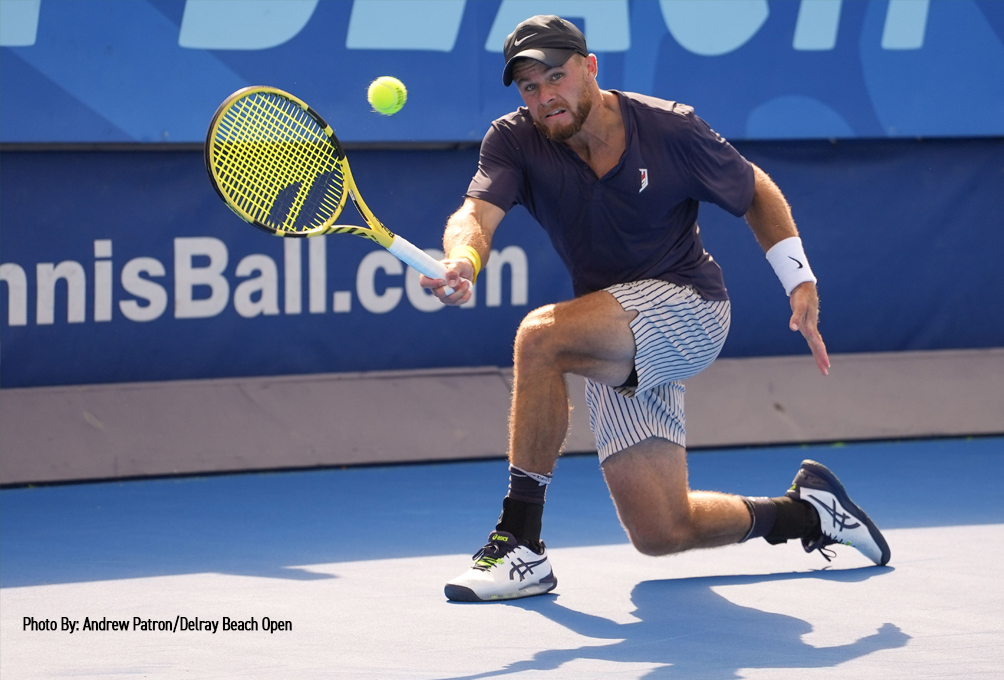 By STEVE DORSEY  DELRAY BEACH, Fla. – Christian Harrison is not ready to close the book on the Cinderella story of this year’s Delray Beach Open by VITACOST.com. Harrison, who needed to win two qualifying matches to earn a spot in the main draw, continued his remarkable run here Monday afternoon with a 7-6(2), 6-4 win against Italian Gianluca Mager in the first match of four quarterfinals Monday on Stadium Court at the Delray Beach Tennis Center. The victory advances Harrison to his first ATP Tour-level semifinal after also having reached his first quarterfinal here this week. The 26-year-old American, who turned pro in 2007 as a 13-year-old, arrived in Delray Beach ranked No. 789 in the world and is playing in only his third ATP Tour-level event, having had to navigate an injury-riddled career that has included eight surgeries and limited his ability to enter Tour-level tournaments. Harrison,... 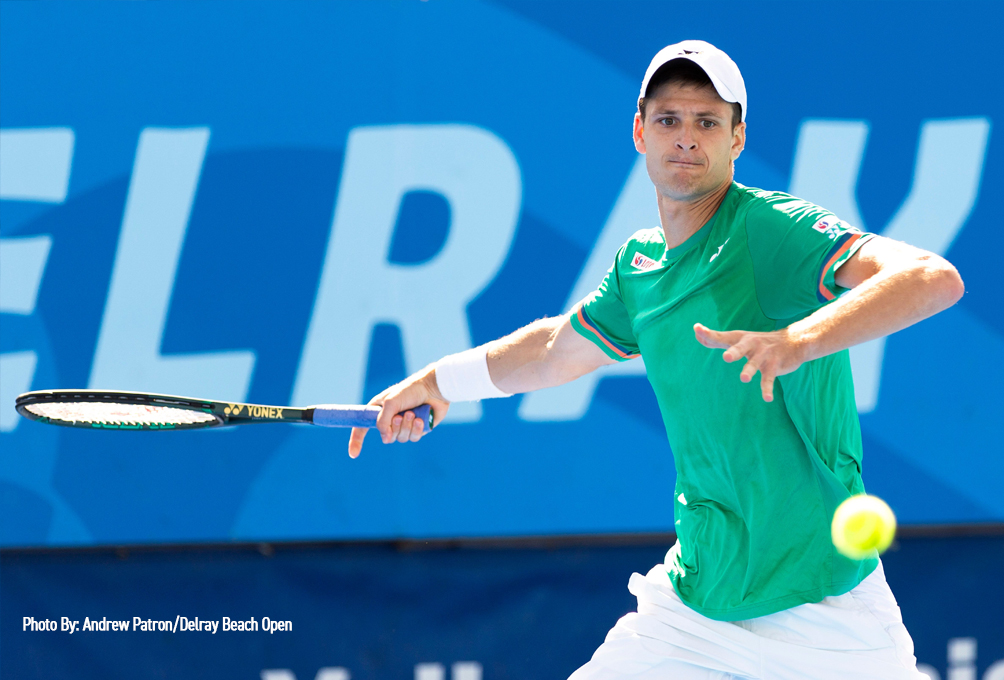 The Cinderella run for Christian Harrison will look to continue in Tuesday’s semifinals at the Delray Beach Open presented by VITACOST.com when he takes on No. 4 seed Hubert Hurkacz. Harrison, who entered this event ranked No. 789 in the world, is having a career defining week in Delray having reached his first ATP quarterfinal on Saturday and will now play his first semifinal. Entering 2021, Harrison had only won two ATP tour level matches in his entire career, having missed significant time as he has battled with injuries that required eight surgeries. This is first his first main draw appearance since Newport in 2018. Harrison has now won three matches in this tournament alone plus a pair of wins in both qualifying and also in doubles where he is semifinalist with his brother Ryan. He is the second-lowest ranked semi-finalist in Delray Beach history behind Juan Martin... 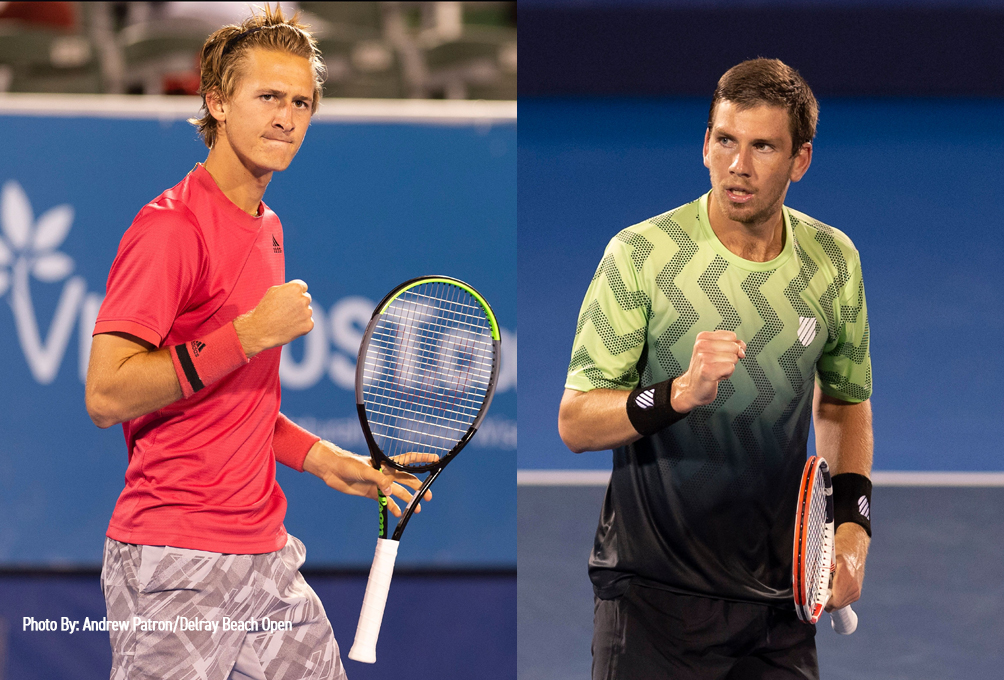 By STEVE DORSEY   DELRAY BEACH, Fla. – The final four is set at the Delray Beach Open by Vitacost.com. American Sebastian Korda and Cameron Norrie of Great Britain each earned hard-fought quarterfinal victories Monday night at the Delray Beach Tennis Center to fill in the final two slots for Tuesday’s semifinals. The 20-year-old Korda ousted No. 2 and world No. 25 John Isner 6-3, 4-6, 6-3 in the evening session’s first match to reach his first ATP Tour semifinal. Korda also defeated Isner in their only other meeting three months ago at the French Open. Norrie’s 6-0, 3-6, 6-4 win in the nightcap against American Frances Tiafoe, the No. 8 seed here this week, leaves No. 4 Hubert Hurkacz as the only seeded player in the 28-player singles field still alive for the title. Isner, who was seeking his first title in Delray Beach, announced in his post-match... 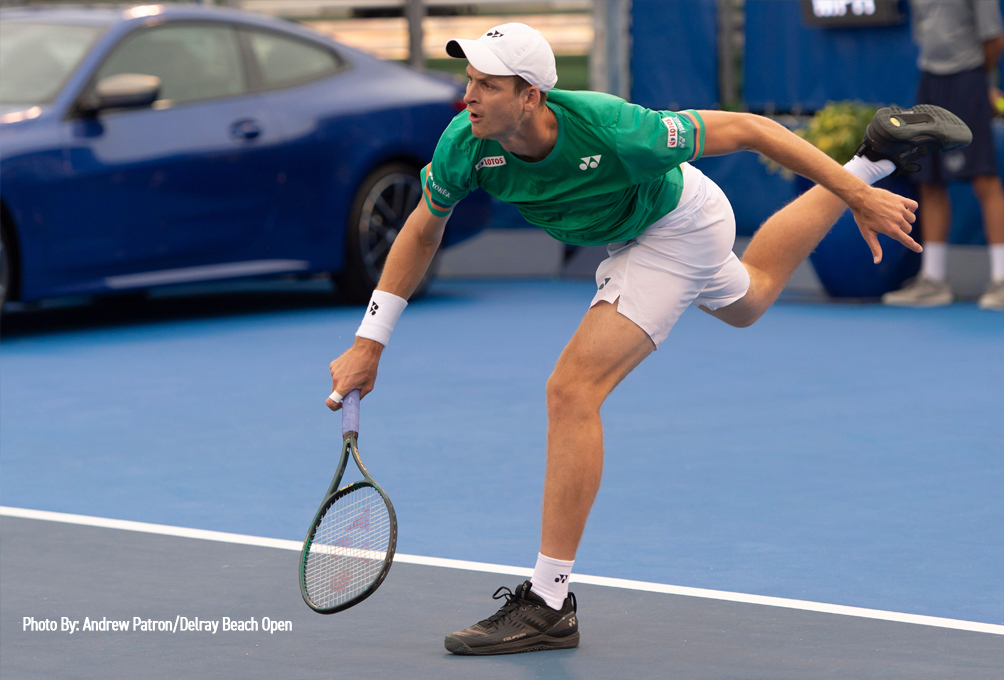 By STEVE DORSEY  DELRAY BEACH, Fla. – Hubert Hurkacz put the brakes on Christian Harrison’s remarkable storybook run at the Delray Beach Open by VITACOST.com Tuesday afternoon and in the process took another step forward in his quest to claim his second career ATP Tour title. Hurkacz advanced to his second Tour final with a hard-fought 7-6(4), 6-4 victory on the Stadium Court at the Delray Beach Tennis Center in a match that featured outstanding shot-making by both players. He will face the winner of tonight’s other semifinal match between Cameron Norrie of Great Britain and American Sebastian Korda. Harrison’s setback in the first semifinal of his ATP Tour career ended a captivating run here that included a win over top-seeded Cristian Garin after going through qualifying to earn a berth in the main singles draw. Despite falling short of reaching his first ATP Tour final, the 26-year-old... 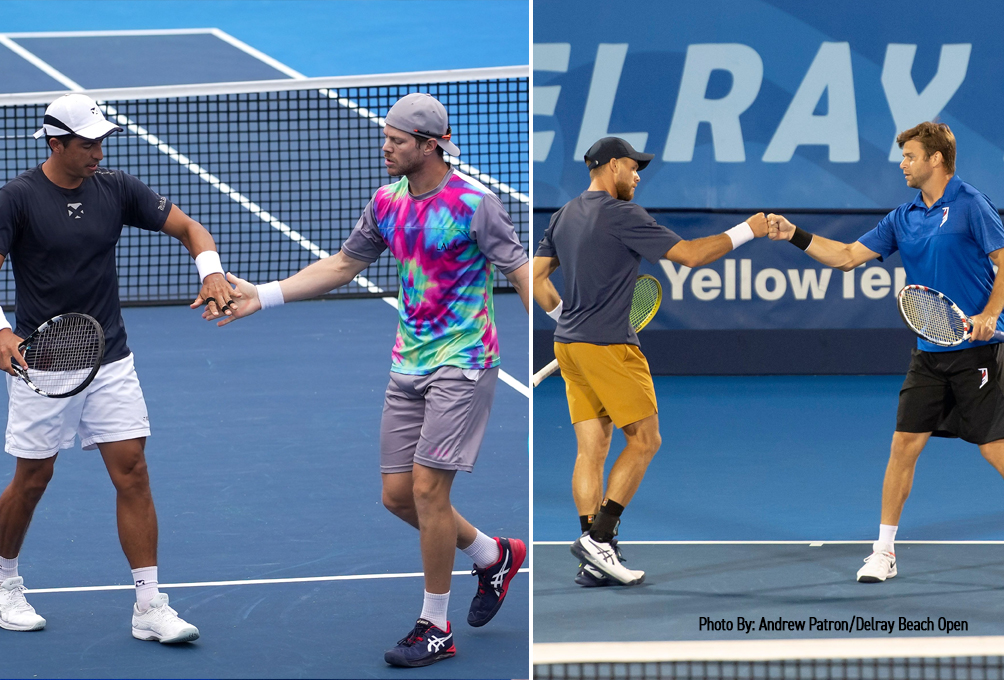 In a tournament filled with upsets, the doubles final is set at the 2021 Delray Beach Open presented by VITACOST.com. Ariel Behar and Gonzalo Escobar are joined by American brothers Christian and Ryan Harrison in Wednesday’s final as both pairs have made the most of a wide-open draw here in Delray. Christian Harrison’s dream week at the Delray Beach Open has made it to the final day after he and brother Ryan steamrolled into the doubles final on Tuesday. The American duo took an hour and 38 minutes to defeat Argentina’s Andres Molteni and Monaco’s Hugo Nys 6-2 6-2. The Harrison’s will look to become the seventh American duo in the last nine years to take the doubles title in Delray and in doing so would make it three years running that a pair of brothers were champions after the Bryan’s won back-to-back in 2019 and 2020. Wednesday’s... 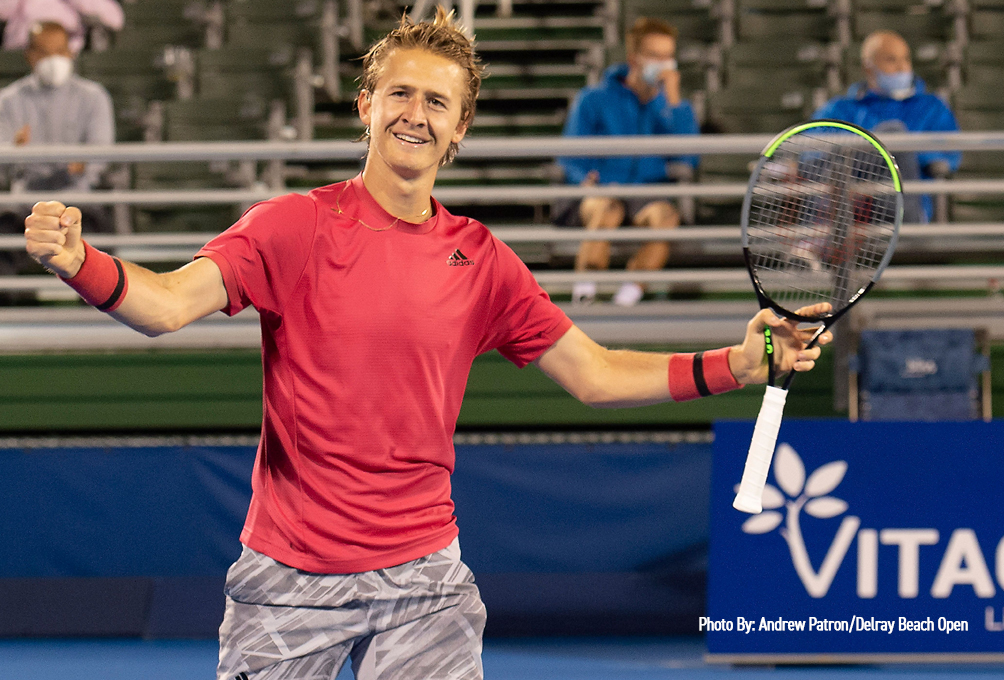 Sebastian Korda will look to finish off his breakout tournament with a title when he faces Poland’s Hubert Hurkacz in the final of the season-opening Delray Beach Open by VITACOST.com. Hurkacz, 23, will have experience on his side as he takes on 20-year-old Korda. The final will be just the 12th tour-level match of Korda’s career, while Hurkacz earned his 50th career match win in Monday’s quarterfinal. As the fourth seed, Hurkacz had a first round bye and has recorded three straight-set wins to reach the final while Korda was stretched to three sets in both his second round and quarterfinal matches. Hurkacz won his only previous ATP final when he claimed the title at Winston-Salem in 2019. The only seed to reach the semifinals, he is looking to be the seventh No. 4 seed to claim this title and the second in a row after Reilly Opelka... 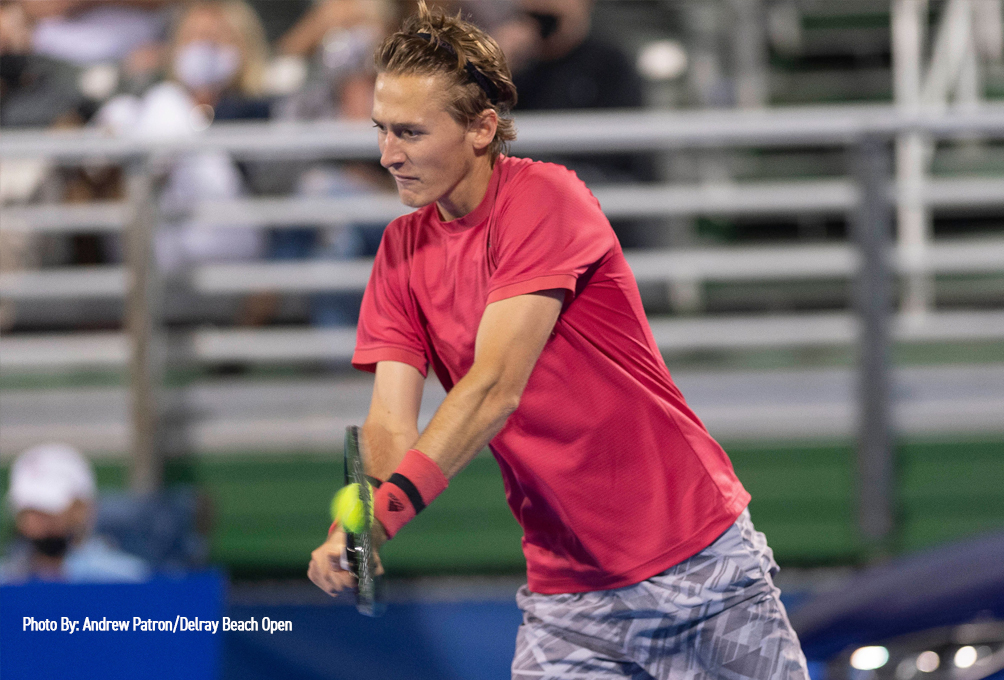 By STEVE DORSEY DELRAY BEACH, Fla. – Sebastian Korda is on a roll. He’s also on the doorstep of claiming his first ATP Tour title. The 20-year-old American’s 6-3, 7-5 win against world No. 74 Cameron Norrie of Great Britain on Tuesday night at the Delray Beach Open by VITACOST.com is his ninth consecutive win and earned him a berth in Wednesday’s championship match, which will be the first final of his young career. Korda has won 17 of his last 19 matches, including the Eckental Challenger title last year. His four wins here this week in the season's opening tournament include victories against No. 5 seed Tommy Paul and top-ranked American John Isner, who was the No. 2 seed here. Korda arrived in Delray Beach ranked No. 119 in the world, and he’s projected to move into the top 100 – likely No. 87 -- with a victory...