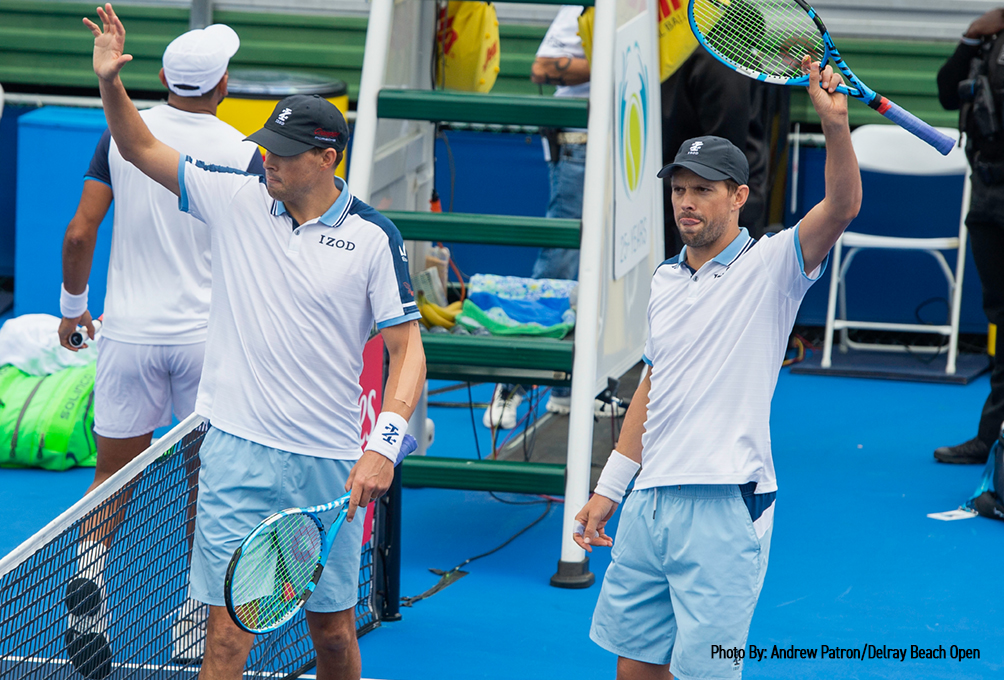 DELRAY BEACH, Fla. – The Bryan Brothers have collected their fair share of hardware at the ATP Tour’s Delray Beach Open, having won five doubles titles here, including last year. The most successful doubles team in ATP history announced that this is their final year competing on the ATP Tour, so it would be a fitting farewell if the American twins hoisted another championship trophy in their 13th and final appearance in Delray Beach.

The Bryans – Bob and Mike – took a step toward that accomplishment Friday afternoon, defeating Divij Sharan and Artem Sitak 6-2, 4-6, 10-3 in the doubles quarterfinals under blustery conditions at the Delray Beach Stadium and Tennis Center. It improved the brother tandem’s overall record to 28-7 at Delray Beach, advancing them to their eighth semifinal here.

“It does wreak havoc, but we love conditions like that,” Bob Bryan said. “We can use our lefty-righty spin to our advantage. I thought we did a great job with the cross breeze, just kind of throwing knuckleballs at the guys. Mike was picking off a lot of stuff. He was getting a lot of traffic across the middle because the ball was moving and they were struggling with the rhythm. We just played a bad five minutes (in the second set). In this format, one little lapse and you’re playing a tiebreaker. I thought we got our energy back (in the match tiebreaker). . . . They’re traditional doubles specialists. They know all the doubles skills very well.”

Next up for the No. 1-seeded twins is a semifinal match Saturday against Marcelo Arevalo and Jonny O’Mara, who upset the No. 3-seeded pair of Marcus Daniell and Phillipp in the first round and have won both of their matches this week in straight sets.

Mike Bryan said he and his brother still have “the fire in our eyes,” but added that it won’t be a major disappointment if they fall short of capturing a sixth title here.

“We’re just enjoying it,” Mike Bryan said. “We’re going to go out there and let it fly. If we go down, big deal. We’ve won it five times, played a lot of matches on this court. Our expectations have dropped a little bit.”