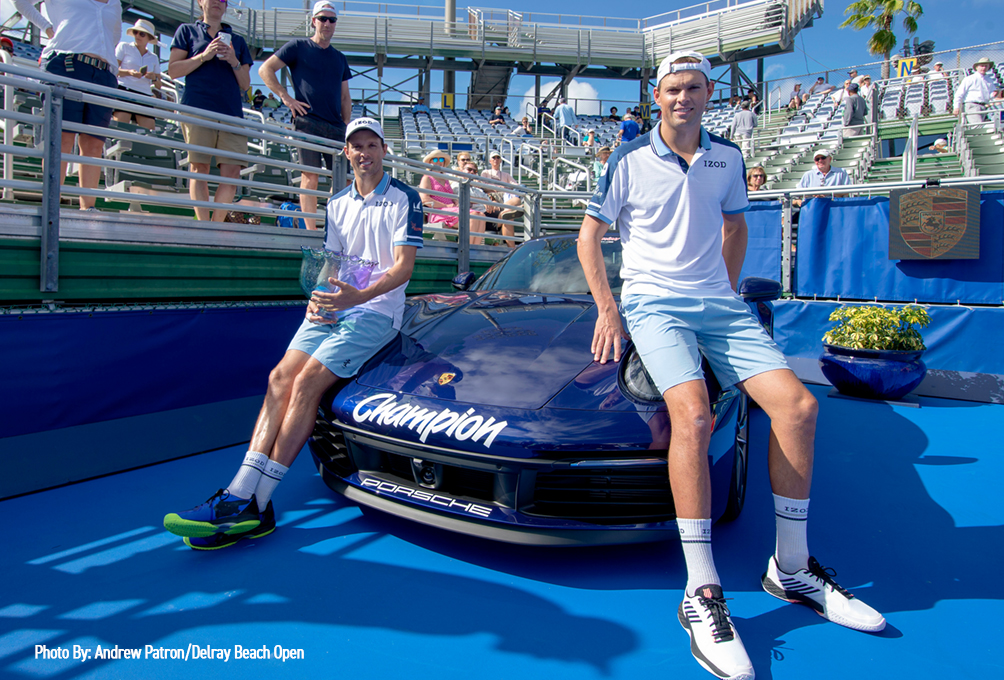 The retiring American twins, making their 13th and final appearance at the ATP Tour’s Delray Beach Open, once again escaped the jaws of defeat with a dramatic movie-like comeback to claim their sixth title here with a 3-6, 7-5, 10-5 victory against Luke Bambridge of Great Britain and Ben McLachlan of Japan in front of a highly partisan crowd at the Delray Beach Stadium and Tennis Center.

It’s the second consecutive year the Bryans have hoisted the championship trophy in Delray Beach, and it’s the sixth tournament that they have won six times – the others being the Australian Open, Houston, Los Angeles, Miami and Monte Carlo.

“Maybe we should just retire today,” Mike Bryan said to the appreciative crowd following the match. “This is pretty sweet. To win six titles is awesome. We’ve played well in South Florida, and this feels kind of like our home court. To win here on the last one means everything to us.”

Bambridge and McLachlan, who captured their first doubles title together last month at Auckland, looked like they might spoil the Bryans’ farewell stop here before the twins broke serve in the 11th game of the second set and held serve to send the championship match to a tiebreaker. Just as they did in their previous two matches, the Bryans grabbed an early lead in the tiebreaker and then breezed to victory.

“Those guys were outplaying us for a good hour and 15 minutes,” Bob Bryan said. “Had we been in a foreign country with no support, it would have been easy to lay down, but the fans kept us fighting and kept us focused. We finally got a break and we were able to turn the momentum. It was amazing the way the match kind of flipped. You got to start off hot, that’s the key (to tiebreakers). It’s amazing to win this title again.”

The victory gave the Bryans, the winningest doubles team in ATP Tour history, their 119th career title and also earned them an ATP championship trophy for the 20th consecutive year, their first title coming in 2001 in Memphis.

“It makes us feel great that we can win and be this consistent over 20 years. Feels like we’re unscathed here,” Mike Bryan said.

As his 41-year-old twin brother Bob said, “We’re going to miss this place.”