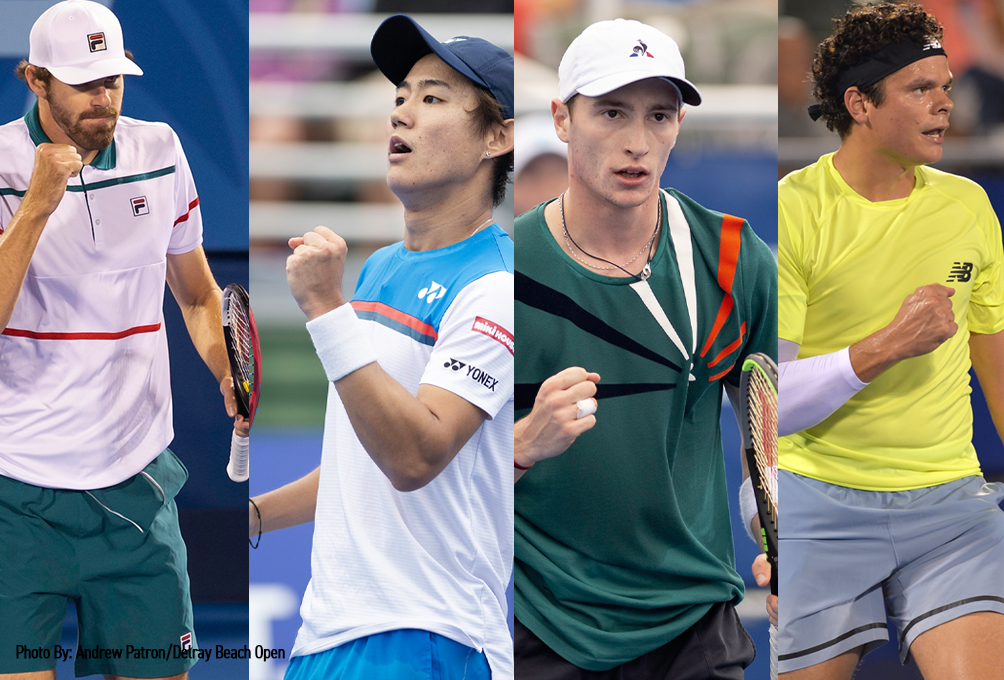 by VITACOST.com Saturday at the Delray Beach Open by VITACOST.com is semi-finals day with four exciting matches scheduled for the day. The Bryan brothers will open the day’s play at 12:30 p.m. against Marcelo Arevalo and Jonny O’Mara. The first singles semi-final will follow and will feature two Young ATP stars as No. 6 seed Ugo Humbert tackles Yoshihito Nishioka of Japan. Two literal giants of the game will play first in the night session not before 6 p.m. as Milos Raonic takes on fellow big server Reilly Opelka. The nightcap will feature the second doubles semi-final between No. 4 seeds Luke Bambridge and Ben McLachlan against Nikola Cacic and Hugo Nys. Here is a breakdown of the matches: [6] Ugo Humbert (FRA) vs Yoshihito Nishioka (JPN) – not before 3 p.m. Saturday’s first semi-final will feature Frenchmen and Delray Beach Open by VITACOST.com No. 6 seed Ugo...

Carlos Moya Tops Idol Ivan Lendl For His 5th Champions Tour Title By Steve Dorsey Carlos Moya’s professional tennis career was dealt a blow two years ago when a foot injury forced his retirement from the ATP World Tour. But Moya, who captured 20 ATP World Tour titles, has made a comeback of sorts on the ATP Champions Tour. Moya defeated eight-time Grand Slam champion Ivan Lendl, his boyhood idol, 6-4, 6-4 Tuesday night at the Delray Beach Stadium & Tennis Center to claim his fifth title since joining the ATP Champions Tour last year. “It was a strange feeling to see him across the net. I used to watch him a lot,” Moya, 35, said of Lendl, who turns 52 next week. “He played great.” Moya, who finished the 2011 Champions Tour ranked No. 1, won all four of his matches in the eight-player tournament that was part of this... 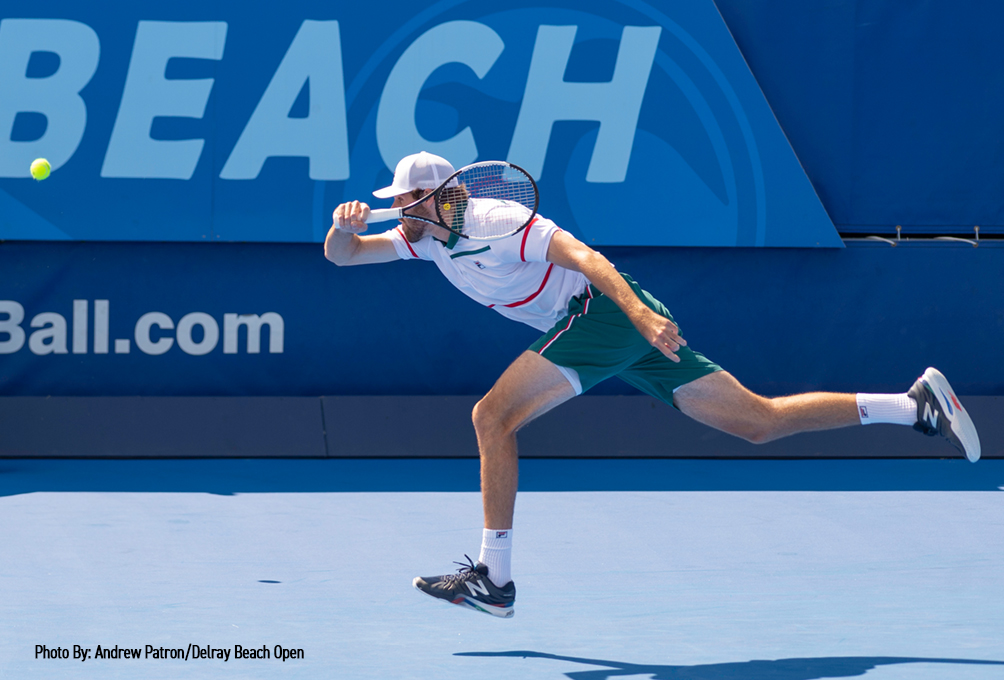 By STEVE DORSEY DELRAY BEACH, Fla. – Reilly Opelka rallied from a set down and staved off a match point to defeat Milos Raonic 4-6, 7-6(6), 6-3 Sunday to reach his first final at the ATP Tour’s Delray Beach Open. The 6-foot-11 American will have very little time to celebrate the accomplishment, however. The semifinal match was postponed Saturday night because of rain and moved to Sunday at 10:30 a.m. The championship final between Opelka, the No. 4 seed here this week, and Yoshihito Nishioka of Japan will be contested Sunday afternoon not before 3:30 p.m. after suitable rest for Opelka. Raonic, ranked No. 37 in the world, was leading 6-5 and had a chance to close out the match in the second-set tiebreaker, but he hit a forehand long on match point and Opelka went on to win the tiebreaker and closed out the match by registering... 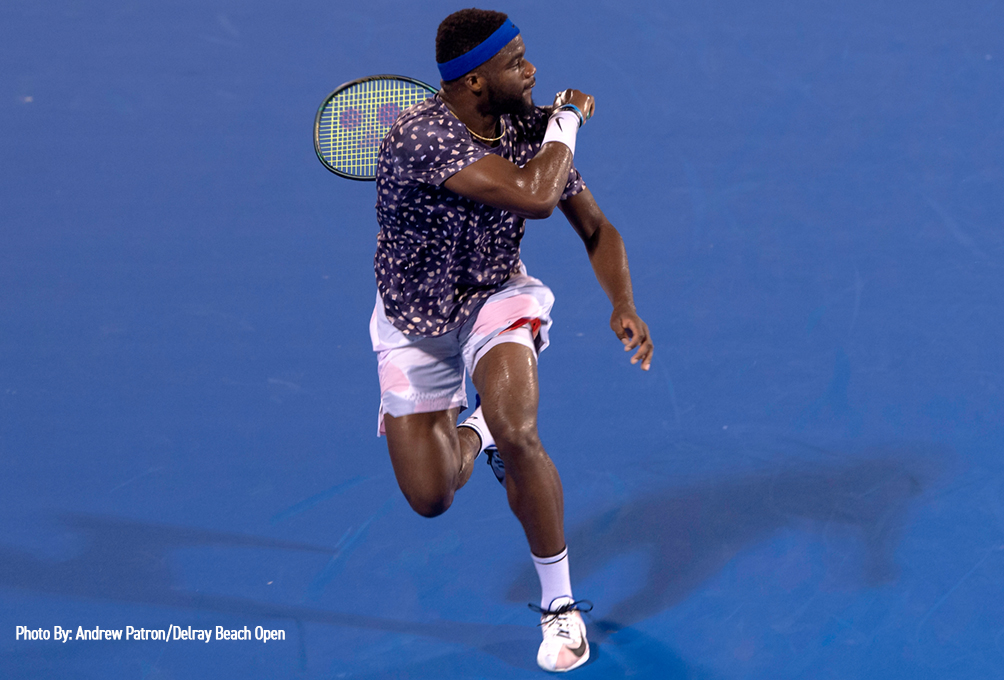 at Delray Beach Open by VITACOST.com 4 American’s will battle for two places in the Delray Beach Open by VITACOST.com quarterfinals on Thursday. Before the American’s take center stage, Ugo Humbert of France will play Miomir Kecmanovic of Serbia for the second time in two weeks in the opening singles match of the day, not before 12:30 p.m. American young guns Tommy Paul and Frances Tiafoe complete the day-time slate not before 2:30 p.m. Opening the night session will be Jack Sock and Steve Johnson, before No. 2 seed Milos Raonic closes play Thursday against German Cedrik-Marcel Stebe. Miomir Kecmanovic (SRB) v Ugo Humbert (FRA) – not before 12:30 p.m. The second match on stadium court and first singles match of the day will feature two of the ATP Tour’s “next gen” with 20-year-old Serbian Miomir Kecmanovic taking on 21-year-old Frenchmen Ugo Humbert. The pair enter the match... 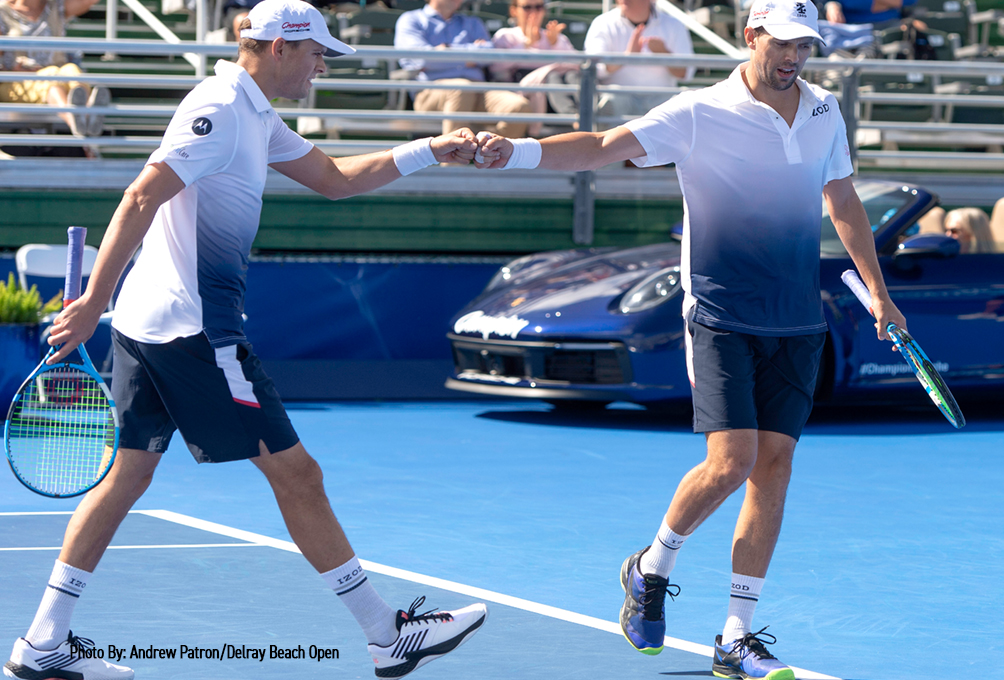 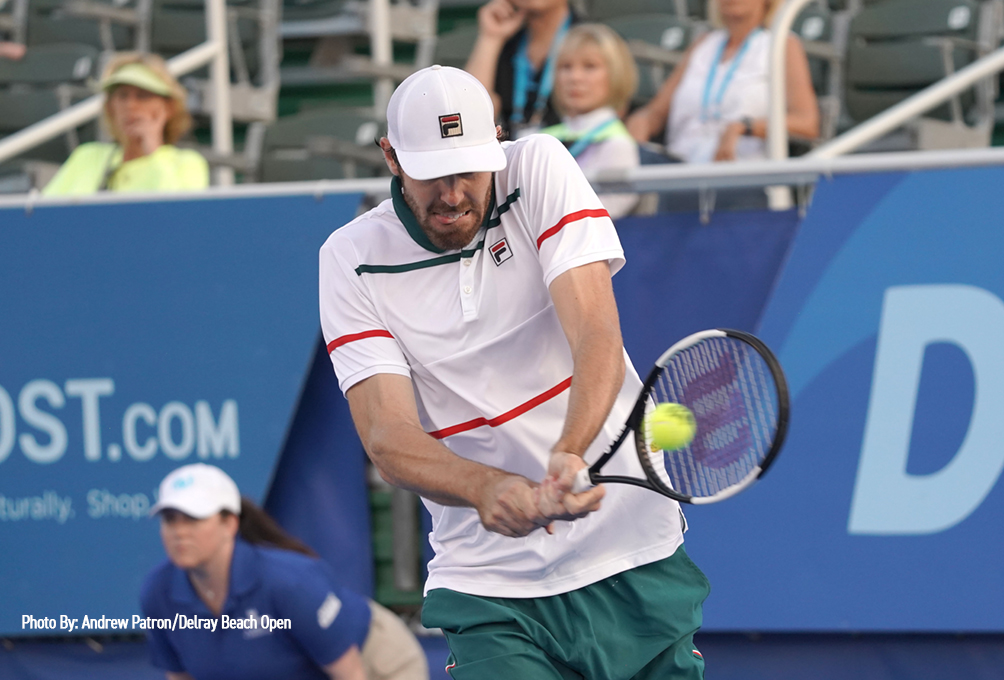 Wednesday at the Delray Beach Open will feature five American’s in singles play and the greatest doubles team of all time, the Bryan Brothers, will also be in action. Ryan Harrison, who is making an injury comeback, will be the first singles match on stadium court not before 12:30 p.m. as he takes on the No. 1 player from South Korea Soonwoo Kwon. Following Harrison and Kwon will be 18-year-old sensation Brandon Nakashima who will play Cameron Norrie of Great Britain. Reilly Opelka and Mackenzie McDonald get the night session underway not before 6 p.m. with the Bryan brothers set to close the show not before 8 p.m. Wednesday. Soonwoo Kwon (KOR) v. [WC] Ryan Harrison (USA) – 2nd on stadium not before 12:30 p.m. The second match of the day features a first time meeting between ATP Tour rising star Soonwoo Kwon and injury ravaged American... 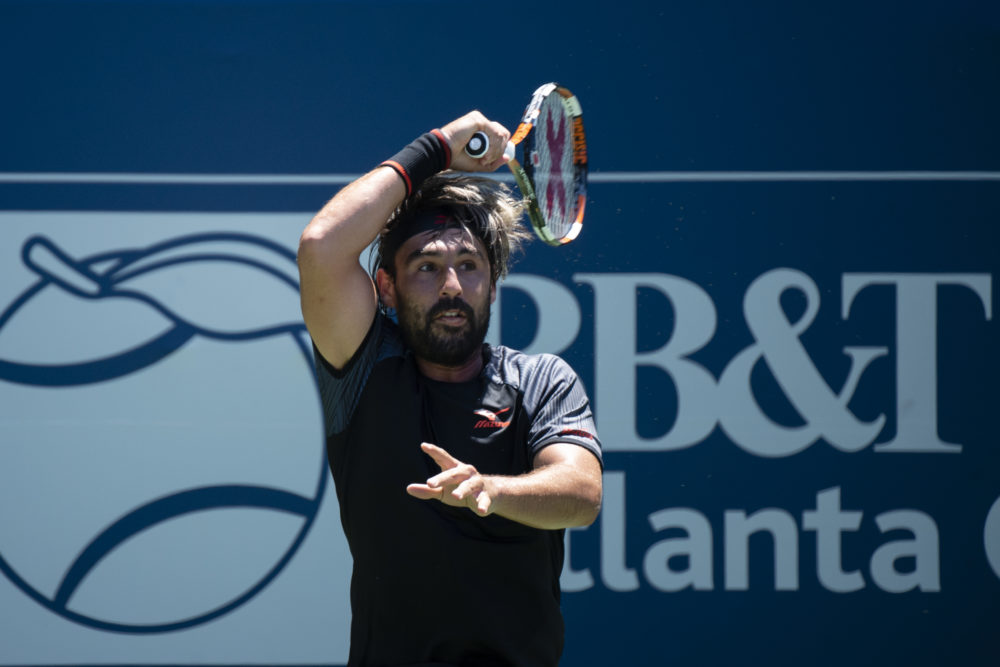 SEPTEMBER 5, 2019, DELRAY BEACH, FL – Today, the Delray Beach Open by VITACOST.com (https://yellowtennisball.com/) announced that former world no. 8 Marcos Baghdatis has been added to Team World for their ATP Champions Tour legends event.Joining Tommy Haas (former world No. 2) and David Ferrer (former world No. 3), he will round out the international squad’s line-up in an action-packed holiday weekend of “Americas vs. World” team matches. The former world No. 8 Baghdatis (CYP) is making his first appearance in Delray Beach after playing his final match on the ATP Tour at Wimbledon this past July. Earlier in his career, Baghdatis boldly announced his arrival to the game in 2006 when making the Australian Open finals at 20-years-old after beating Roddick, Ljubicic and Nalbandian in five set matches to make him the youngest Australian Open finalist since Moya (in 1997) and the lowest ranked Grand Slam finalist (No. 54) since... 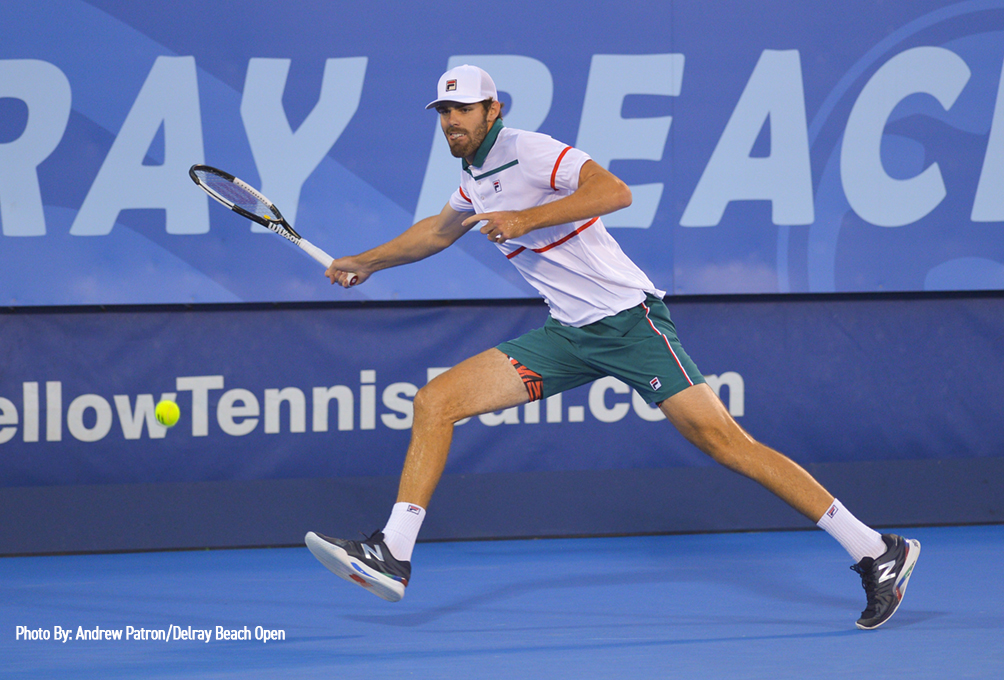 Opelka Serves Up Quarterfinal Berth By STEVE DORSEY DELRAY BEACH, Fla. – When Reilly Opelka’s serve is sizzling, the lanky 6-foot-11 American is a tough out at any tennis tournament. That certainly was evident Wednesday night in second-round action at the ATP Tour’s Delray Beach Open. Opelka, the No. 4 seed here, delivered 17 aces with no double faults en route to a 6-3, 6-4 win against fellow American Mackenzie McDonald, lifting him into the quarterfinals at Delray Beach for the second time in three years. The 22-year-old Opelka, who is ranked No. 54 in the world, needed only 64 minutes to oust McDonald after being stretched to three sets in his first-round match against qualifier Ernests Gulbis. Through those two matches, Opelka's serve has not been broken while he's fired and 37 aces. “It’s getting better,” Opelka said of his serving game, particularly his first-serve percentage, of which he... 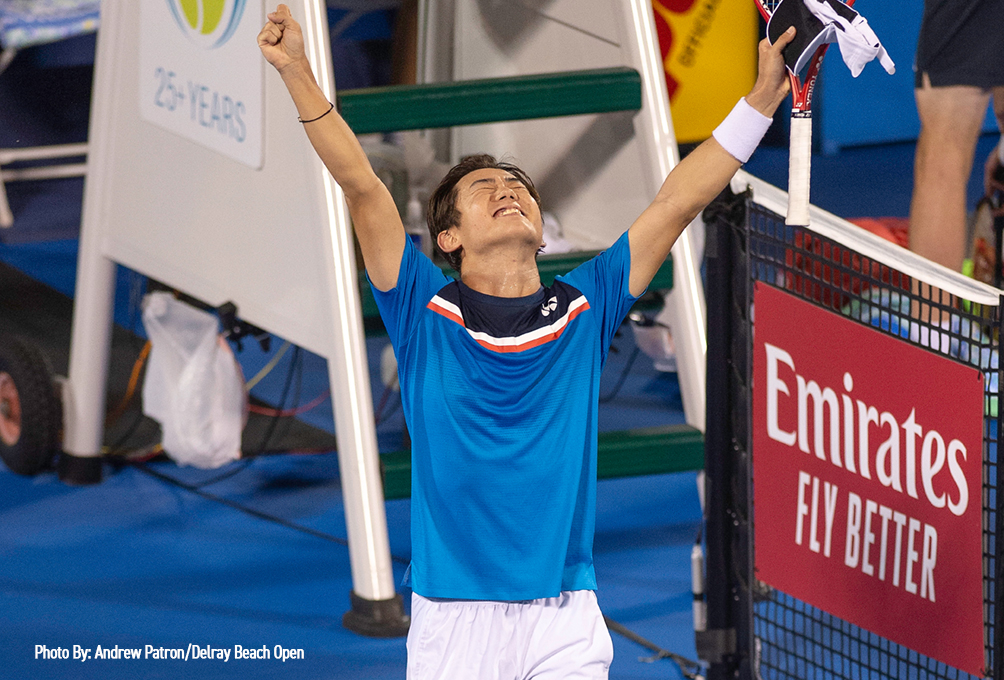 By STEVE DORSEY DELRAY BEACH, Fla. – Yoshihito Nishioka raised his arms in exultation and flashed a big smile toward the stands early Saturday night after his three-set victory against Ugo Humbert in the semifinals of the ATP Tour’s Delray Beach Open sent him to his second career final. Nishioka became even more emotional several minutes later when he was informed that the win also guaranteed him a Top 50 world ranking. “I was waiting for that. It was a very long time,” Nishioka said after pausing to digest the news following his roller-coaster 1-6, 6-4, 6-0 win against Humbert. Nishioka had reached a career-high ATP world ranking of No. 58 about three years ago and was trending toward reaching the Top 50, an important goal of his. Soon after that, he sustained a left ACL injury at the Miami Open that put his tennis career on hold... 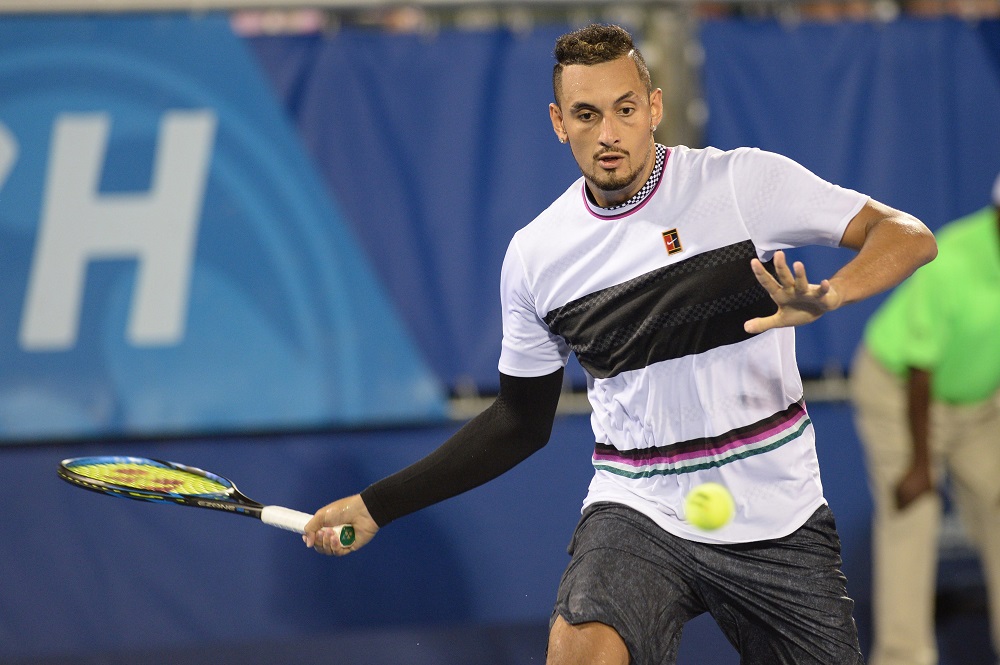