Champions Crowned Final Day of Clays at The Beach 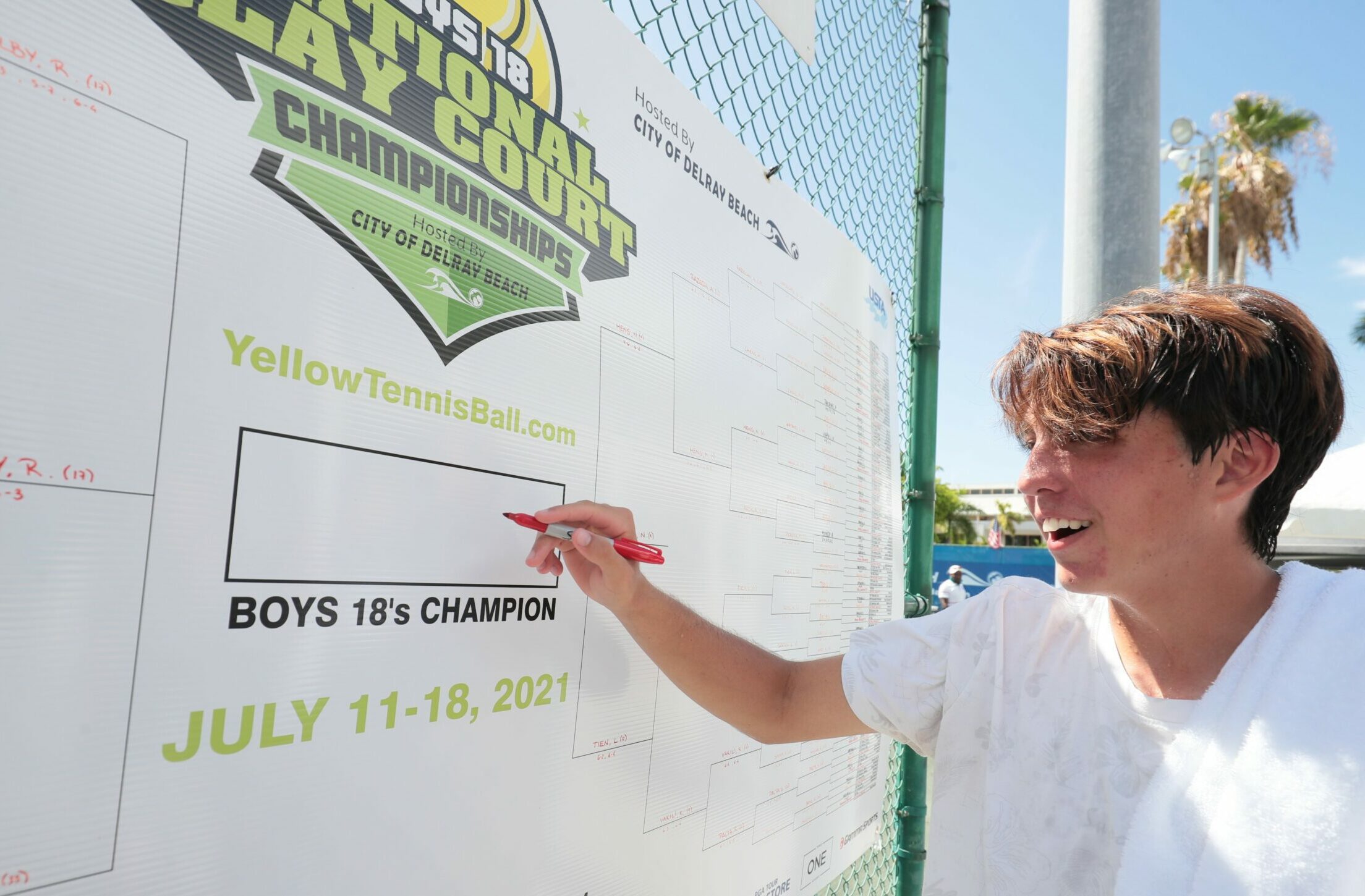 20 Jul Champions Crowned Final Day of Clays at The Beach

Champions Crowned Final Day of Clays at The Beach

DELRAY BEACH, Fla. –  USTA Boys’ 18 & 16 National Clay Court hosted by the City of Delray Beach since 2007 have prospered in their tennis careers, having signed and competed for NCAA Division I teams and/or pursued a professional tennis career.

At one point, the tournament was more than 150 matches behind schedule thanks to rain and lightning in the early rounds. Battling back to make up every one due to Mother Nature’s schedule, several champions were crowned to cap off Day 8 of the tournament.

After breaking his elbow at the 2018 Clay Court Championships, Boys’ 18 No. 17 seed TeddiBear Baron (Alexandria, Virginia) was told by several doctors that he would never be able to play tennis again. With successful surgery and resiliency, Colby powered through adversity to close his time at the USTA National Clay Court championships on top. His parents enjoyed pastrami on rye in New York while he was hard at work competing.

Teddi won the tightly-contested battle in the first set 7-6 (4), capping off the championship with a 6-3 victory in set two over No. 9 seed Nicholas Heng (Madison, Alabama) in the finals. For his ability to respond through obstacles with success, Colby was given the Boys’ 18 Player of the Tournament.Sunrise, Florida native and No. 17 seed in the Boys’ 16 championship Felipe Pinzon had a plethora of circumstances to overcome, including knocking off a No. 1 seed and playing doubleheaders to get to the finals. Pinzon’s work ethic paid off on Sunday, basking in glory in home state.

No. 12 seed and yesterday’s “Player of the Day” Ari Cotoulas (Brooklyn, New York) won set one over 5-7, putting Pinzon in another must win situation. Pinzon once again answered the bell by winning sets two and three 6-2, 6-3 to claim the title and earn the Boys’ 16 Player of the Tournament, taking third in doubles in the process.

Facing a similar situation as their semifinal match, Caden Hasler (American Fork, Utah)/Dylan Tsoi (El Dorado Hills, California) had to climb the same slope after losing set one 4-6. Hasler/Tsoi, however, once again rose to the mountain top.

Hasler/Tsoi weathered the storm to win set two 6-3 and force a tiebreaker set once again. Being in a tiebreaker situation for a third time in the tournament, the duo was unfazed.

“It was kind of funny because we were actually talking about being the comeback kids of the tournament before the match,” Tsoi said. “There’s so many great players, especially in the doubles draw. A lot of times, we got caught off guard and didn’t play our best in the beginning sets. Even though we were down once again, we always felt like we had a shot.”

Coming up with a 10-3 win in the tiebreaker set, Hasler/Tsoi defeated Cooper Woestendick (Olathe, Kansas)/Stefan Regalia (Arlington, Virginia) to clinch the Boys’ 16 Doubles title. For their performance and effort through the course of the tournament, Hasler/Tsoi earned “Player of the Day” presented by VITACOST.com.

“This is an absolute honor,” Tsoi said. “The Clay Court Nationals is one of the biggest tournaments, if not the biggest tournament, of the entire year for every USTA junior. I still remember the first time I played in the Clay Court Nationals, I lost in the first round. To go from that to this is really impressive. To add on to that, this is Caden’s first ball and it’s a gold ball for him and I’m really happy for him as well.”

Lucas Brown (Plano, Texas)/Sebastian Sec (New York, New York) had to clinch the tiebreaker set 11-9 in yesterday’s semifinal to advance to the finals. In a close second set, the doubles duo was determined to end the match right then and there.

Brown/Sec were tied 5-5 in the second set and had to battle from their opponents getting three break points to win the set. As they had all tournament long, Brown/Sec dug deep.

The duo was able to take a 6-5 lead in the second set to put the ball in their court, needing just one more game to clinch the title.“We’ve gone into every match not wanting to go into a third tiebreaker set,” Brown said. “That game was huge, huge, huge to prevent a third set tiebreak from happening. It’s a championship match. In a third set tiebreak, everyone is tight on the court and anything can happen. Once we were able to get it, we both knew we could break right then and there and get the title.”Brown/Sec came up in the clutch in the following game, clinching the win for a 7-5 set two win to claim the Boys’ 18 Doubles title over Conrad Brown (Irvine, Texas)/Alex Michelsen (Aliso Viejo, California). For their efforts, Brown/Sec were named “Players of the Day”.“The coolest thing is the way we won it and the thing I’m happiest for because it was not easy,” Brown said. “We won four out of our six matches in third set tie breaks. For that to happen, we had to come in clutch on a consistent basis. It’s amazing to be held with that elite company, but the coolest thing is the manner in which we did it. It’s something that’s really tough to do.”

The City of Delray Beach is grateful for all the participants, their families, the fans, ballkids, umpires, volunteers, sponsors, site partners and tournament staff for making the 2021 tournament a success. For complete draws, including match times, locations and results, click here. For all other tournament related information, visit YellowTennisBall.com/NationalClays.

MEDIA: If you’re wishing to get more information of the event you can contact:

SITES & FACILITIES: A special thank you goes out to the City of Delray Beach, the Delray Beach Tennis Center, and the Delray Swim & Tennis Club for being the host-site. Additionally, we’re very appreciative to all of the match sites partners: Boca Lago and One Tennis Academy, Boca Grove Country Club, Boca Raton Racquet Center, Indian Spring Country Club, Palm Beach Gardens Tennis Center and the Oaks for their involvement with the future of American Tennis!