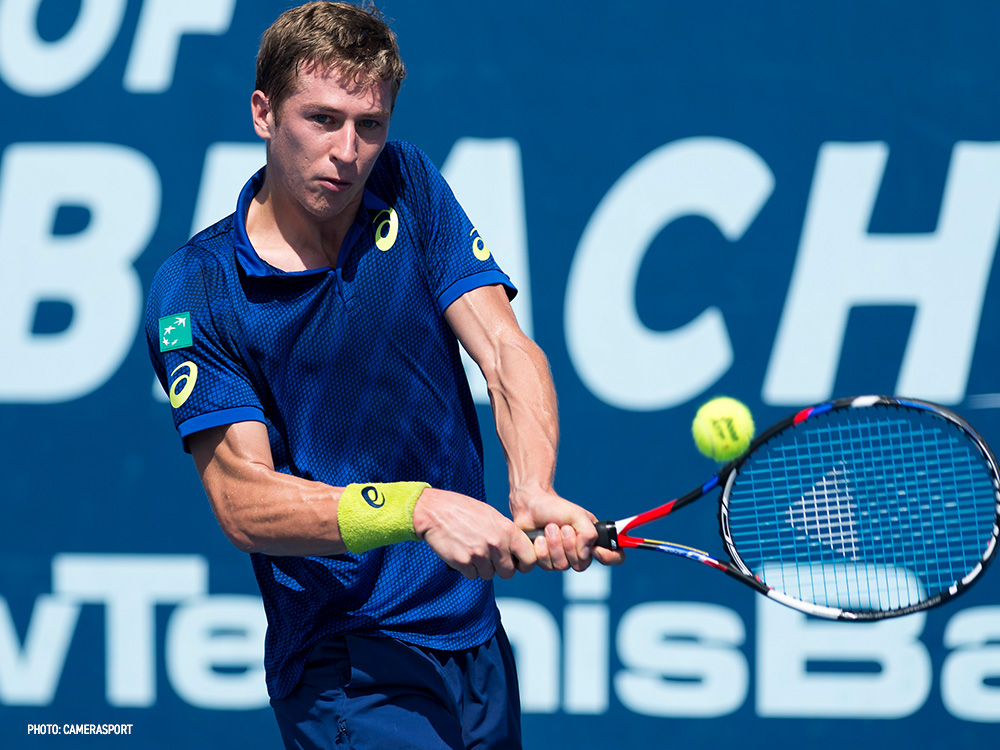 DELRAY BEACH, FLA. – Kimmer Coppejans’ first visit to Delray Beach has been a pleasant one, at least so far.

The 23-year-old Belgian capped a successful weekend Sunday afternoon when he penciled his name into the main draw of the ATP World Tour Delray Beach Open by rallying to defeat South Korean Hyeon Chung 3-6, 6-2, 6-2 in the second round of qualifying for the 32-player field that will begin play Monday.

Coppejans’ win against Chung, a 20-year-old NextGenATP star, came on the heels of an equally impressive performance by Coppejans on Saturday when he ousted American Rajeev Ram, who was the 2016 Delray Beach Open runner-up. Coppejans also rallied from down a set to beat Ram.

“I played (Ram) a couple of weeks back and lost a three-set match, so I knew I had a chance to beat him but it was going to be tough,” Coppejans said, adding that he was unaware that Ram was a finalist here last year. “Maybe that was a good thing that I didn’t know. They told me afterwards, so that was a big win. And (Sunday), beating Chung, it was a very good win because he’s playing well.”

Coppejans arrived in Delray Beach ranked No. 187 in the world, having lost in the round of 32 in his two previous tournaments on the ATP Challenger tour, including the three-setter against Ram in Dallas.

“I had a rough couple of weeks,” Coppejans said, adding that he didn’t feel he was playing badly despite losing. “Here, the turnaround, so it obviously helps a lot for your confidence.”

Coppejans will be seeking his first ATP World Tour main draw win Monday afternoon when he faces Yoshihito Nishioka of Japan, ranked No. 99 in the world, in the first round on Court 1.

The other three qualifying spots in the main draw also were determined Sunday, with American Tim Smyczek, Steve Darcis of Belgium and Akira Santillan of Japan completing the main draw bracket, each with straight-set victories.

Smyczek, the only American to make it out of the two-day qualifying round, earned a berth in the main draw here for the sixth consecutive year by registering a 6-2, 6-2 win Sunday against Canadian Vasek Pospisil less than 24 hours after dispatching another Canadian opponent, Peter Polansky, by the identical score.

“I had a rough latter nine months last year,” Smyczek said. “I just kind of struggled with my game a bit. No injuries, nothing like that, just kind of lost my way a little bit on the court.”

Smyczek said he worked hard on “retooling, revamping” his game to get ready for this year’s tour and feels good about the improvement.

“I feel really good about how I’m hitting the ball, getting back to some of the things I used to do well,” Smyczek said.

Smyczek said he’s also worked on being more aggressive offensively, “instead of being a counter-puncher” and defensive player.

“At this level, it’s important to be able to finish points when you want to,” Smyczek said of his strategy adjustment. “I still have good days and bad days, but I’m having more good days than I used to. Rounding into form, I hope. I feel good about my game (and) I’m healthy.”

Smyczek will face a daunting first-round opponent, however, having drawn yet another Canadian in world No. 4 Milos Raonic, the top seed here this week. That match will be played Tuesday at 12:30 pm.

The 32-year-old Darcis, ranked No. 55 in the world, won both of his qualifying matches this weekend in straight sets. He ousted Darian King of Barbados 6-1, 6-4 after losing only two games in his first-round qualifying match against American Marcos Giron. Darcis’ ranking was good enough to get into the main draw had he met the entry deadline, but a late decision to play mandated he play through the qualifying rounds.

The Belgian will meet Bernard Tomic, the No. 6 seed here, in the first round on Tuesday, but first plays a doubles match Monday night with playing partner Adrian Mannarino of France on stadium court at 6:00 pm.

Santillan, an alternate in the qualifying round who is ranked No. 194 in the world, earned his spot in the main draw with a 6-1, 6-2 win against veteran Benjamin Becker of Germany a day after ousting another German, Tobias Kamke, in straight sets. Becker had played in seven previous Delray Beach main draws, and had reached the semifinals in 2007.

Santillan’s first-round opponent in the main draw will be NextGenATP American Taylor Fritz. They will meet in the nightcap Monday at 8:00 pm.