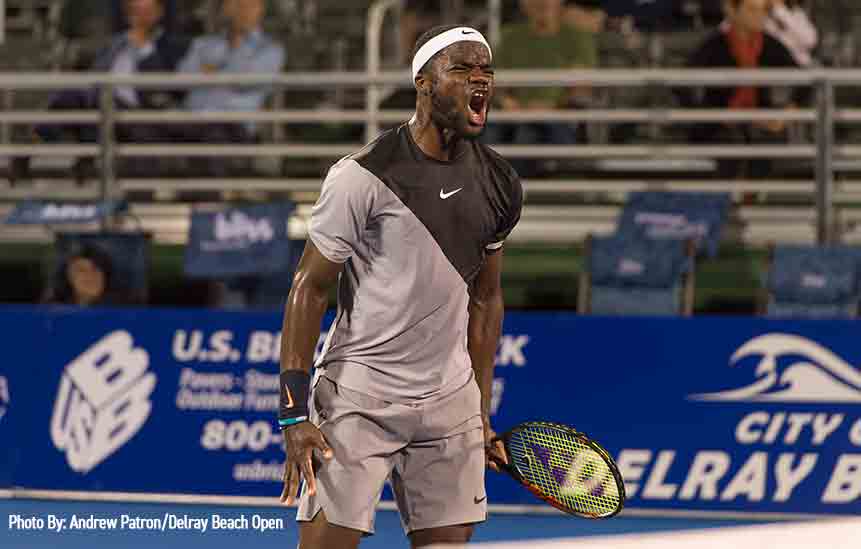 DELRAY BEACH, Fla. – Juan Martin del Potro became the latest highly ranked player to fall at the ATP World Tour Delray Beach Open, where only one of the nine seeds remain for the quarterfinals.

American wild card Frances Tiafoe sent del Potro, ranked No. 10 in the world and the No. 2 seed here this week, to an unexpected early exit Thursday night in the final match of the second round. Tiafoe’s 7-6 (6), 4-6, 7-5 upset on the Stadium court at the Delray Beach Stadium and Tennis Center, advances the world’s No. 91st ranked player to his second consecutive quarterfinal.

Tiafoe will meet No. 30-ranked Hyeon Chung of South Korea in the nightcap of Friday’s quarterfinals, so he won’t have long to recover from his emotional win against del Potro, who is his tennis idol. Chung, the No. 8 seed here, advanced with a 6-4, 7-6 (4) win against qualifier Franko Skugor of Croatia.

“It’s unbelievable,” Tiafoe said of his win against del Potro. “Two weeks in a row in the quarters. I really wanted to win to make a statement. I’ve had a ton of tough losses to top guys and I just wanted to get over the line. I feel like this is going to be a good year for me.”

Del Potro appeared poised to notch his seventh win in nine matches this year when he jumped to a 4-1 lead in the first set. But the nerves appeared to dissipate for Tiafoe, who charged back and won the first-set tiebreaker.

Del Potro broke Tiafoe’s serve to open the second set and the rest of the match was like a roller-coaster ride that concluded with a wild finish when Tiafoe finally notched the victory on his fourth match point.

“That was straight nerves, but the last return I connected,” Tiafoe said of his match-clinching put-away at the net. “There was a lot of stuff going on. I heard (del Potro’s) dog just died that he had for 10 years, so he’s pretty emotional. So I felt for him, but at the same time he was competing. I’m real happy with the win.”

Tiafoe said he anticipates an equally compelling match against Chung on Friday night.

“He’s hot right now and he’s coming off an unbelievable Australian Open,” Tiafoe said. “If I can serve well, I think I have a chance. I’m playing some of the best tennis of my life right now.”

Chung, who reached the semifinals at the Australian Open, was cruising along with a 4-0 lead in the second set, but Skugor won five of the next six games and then held serve in the 12th game to force a tiebreaker. Chung, who improves to 10-3 in 2018, applauded Skugor’s resilience.

“I had a really good chance to finish like 6-2 or something,” said Chung, who needed three sets to win his first-round match against “lucky loser” Cameron Norrie. “He played good in the second set. I just tried to keep focused.”

American Steve Johnson will face off against Russian Evgeny Donskoy to kick off Friday’s quarterfinals beginning at 12:30 p.m. That match will be followed by American Reilly Opelka against German Peter Gojowczyk. Canadian Denis Shapovalov and American Taylor Fritz will open the evening card at 6 p.m., followed by the nightcap between Chung and Tiafoe.