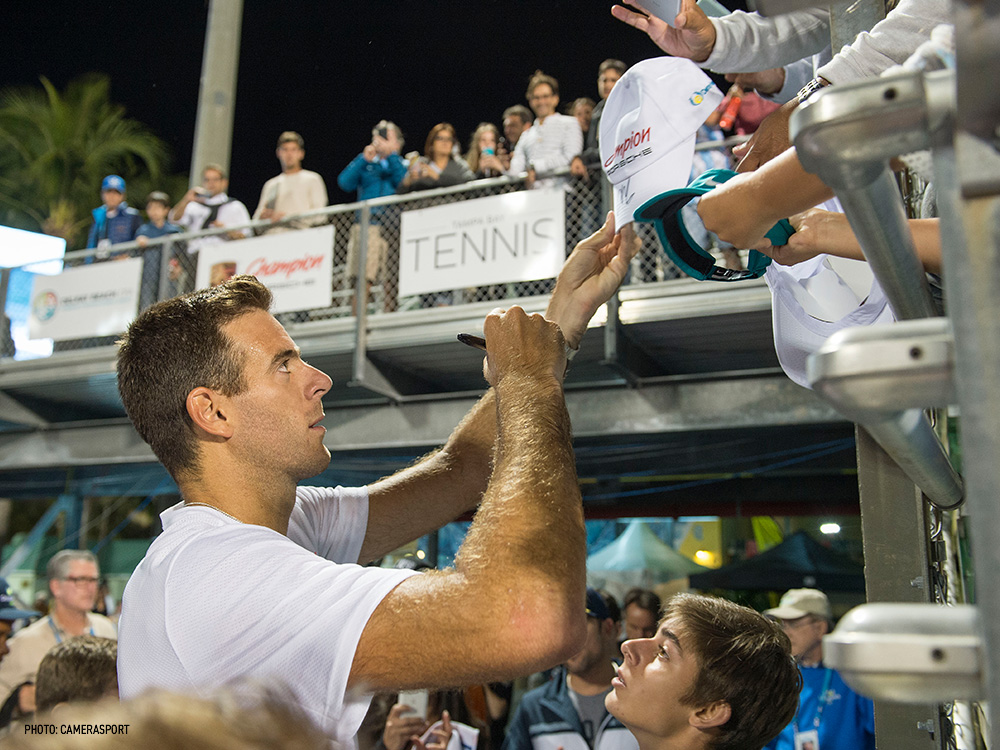 DELRAY BEACH, FLA. – It didn’t have quite the level of anticipation and build-up as a year ago when Juan Martin del Potro made a triumphant return to the Delray Beach Open following almost a year away from the game to heal a wrist injury. Nonetheless, del Potro’s first-round match Tuesday night in front of an enthusiastic crowd at the Stadium Court had a special feel to it.

To begin with, del Potro arrived here this year with a world No. 42 ranking, exactly 1,000 points higher than when he made his comeback return last year here. Secondly, his opponent Tuesday night was also a former Delray Beach champion with a big serve, but del Potro found a way to overcome some windy conditions and get past Kevin Anderson, advancing to the second round with a 6-4, 6-4 win against the 6-foot-8 South African.

“It’s never easy to start the season against the big servers of the Tour,” del Potro said of his win against Anderson. “It was a very difficult match for me, but in this tournament all the players are dangerous.”

Del Potro, the 2011 Delray Beach champion, used this tournament last year – when he reached the semifinals before losing to Sam Querrey – to jumpstart his ATP Comeback of the Year season in which he finished the year with a No. 38 ranking, earned a silver medal at the Rio de Janeiro Olympics and led Argentina to its first Davis Cup title.

He said he still has some things to work on, but mostly was pleased with his performance.

“For the conditions tonight, we made a good tennis match,” del Potro said. “I did well with my slices, but I could improve my two-handed backhand. For being my first match of the season, I think it’s OK, but I need to keep working hard. The good thing is, I won the match.”

Anderson, the 2012 Delray Beach champion who entered the week ranked No. 75 in the world, didn’t complain about drawing such a tough first-round opponent.

“That’s just the draw. It’s a tough first round, obviously, but that’s how it went,” said Anderson, who has not beaten del Potro in seven meetings. “It’s obviously a little disappointing to lose here early, but I have to just look forward to next week (at Acapulco).” 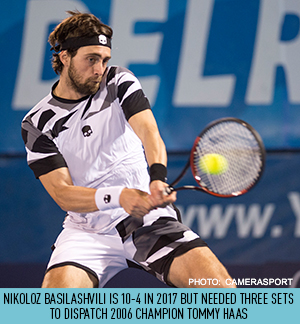 Nikoloz Basilashvili, who was the runner-up at Memphis last week and arrived in Delray Beach with a career-best No. 53 world ranking, held off an inspired effort by veteran Tommy Haas in the first match of the evening session. Basilashvili’s 6-7(4), 7-6(8), 6-2 win sends into a second-round matchup against Belgian qualifier Steve Darcis, who upset No. 6 seed Bernard Tomic earlier in the day.

Haas, 38, is the oldest player in the draw and has played sparingly while battling some injuries the past couple of years, the latest being at the Australian Open. Nonetheless, Haas appeared poised to pull off what would have been the day’s third upset before he was forced to take a medical timeout because of a leg injury with the second set tied 4-4. Haas, who plans to retire this season, returned to the court and was able to force the set to a tiebreaker, but Basilashvili prevailed 10-8 and switched the momentum to the Georgian’s side.

“Overall, I felt good up to that scare in the second set,” said Haas, who said that his right quad tightened up in the eighth game of the second set. “It felt weird, like a stinger. I was playing well. Got a little tired there in the end. . . . It just sucks when you’re that close of possibly winning a match and you don’t win. I haven’t had that feeling in a long time, and it’s not a good feeling. I felt like I was playing some good tennis, and not being able to close him off being up a break in the second set, just playing a poor game, it’s frustrating.”
Basilashvili arrived here having made the semifinals two weeks ago in Sofia that included a win against world No. 8 Dominic Thiem, and then reaching the Memphis final last week. He’s now won eight of his last 10 matches.

“I enjoyed playing on (the Stadium Court) against him,” Basilashvili said of his first meeting against the former world No. 2 Haas. “I respect him a lot. I wish him good luck the rest of the season.”

Basilashvili said he struggled some adjusting to the outdoor Stadium Court at the Delray Beach Tennis Center after having played indoors.

“From indoors to outdoors is difficult,” Basilashvili said. “It’s good that I got this win because he’s a very experienced and good player.”

The other Tuesday evening matches were all in the doubles draw. Americans Bjorn Fratangelo and Taylor Fritz advanced to the second round, as did the teams of Yen-Hsun Lu/Leander Paes, Raven Klaasen/Rajeev Ram and Treat Huey/Max Mirnyi, all winning in straight sets.

The top-seeded Bryan brothers headline the schedule for Wednesday’s matches. They will face fellow Americans Sam Querrey and Jared Donaldson in the nightcap on the Stadium Court. Top-seeded and world No. 4 Milos Raonic of Canada will kick off the evening session against Croatian Borna Coric at 6 p.m. American Jack Sock, the No. 3 seed here, will play his second-round match against Guillermo Garcia-Lopez of Spain in an early-afternoon match.