Delpo to kick off comeback at the DBO again 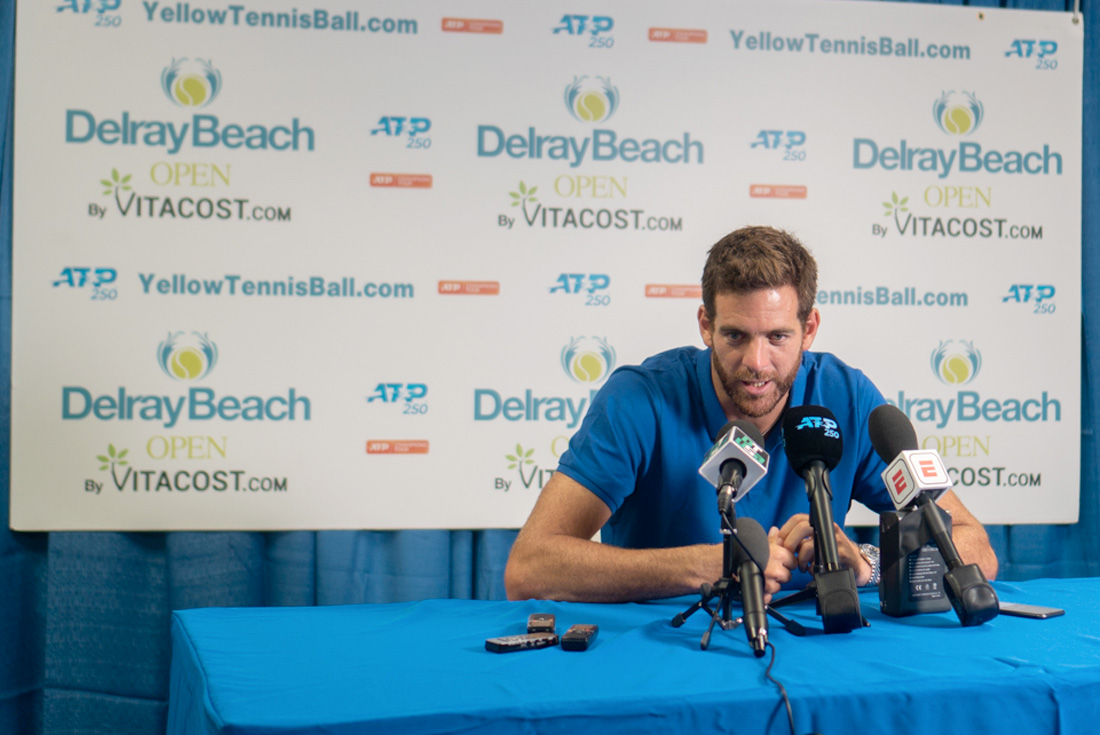 DELRAY BEACH, Fla. – Juan Martin del Potro used the ATP Tour’s Delray Beach Open as a launching pad to reboot his return to competitive tennis in 2016 following a lengthy injury-induced absence and reached the semifinals here that year to jumpstart his triumphant comeback. The affable Argentine is facing a similar situation here again this week.

Del Potro has not played a competitive match since sustaining a fractured patella in his right knee last October in Shanghai. He arrives in Delray Beach ranked No. 4 in the world and is the No. 1 seed here in the 32-player field that includes the top five Americans. The 30-year-old del Potro’s resume includes 22 ATP titles, including one here in 2011. He said Monday that he’s excited to be back and making his fifth appearance in Delray Beach.

“I have great memories playing here,” del Potro said during a press conference Monday. “I love to come back and play in this event. And I have a lot of Argentina fans coming to watch my game in this tournament, so it’s a little bit special to me.”

Del Potro said the past four months have been “difficult” while rehabbing his latest injury, but he’s anxious to return to action.

“I’m ready to play a match again,” del Potro said. “I know I will need a little bit of time to get confidence in my body and my game. I’m not feeling that I’m a hundred percent yet. But someday I have to start to play and we decided to do it here in Delray Beach because I have good memories from the past, so hopefully, I do well.”

Del Potro had risen to a career-high No. 3 world ranking prior to injuring his knee early last October, and at the time he feared it might be a career-ending injury. But here he is again, ready to compete on the highest level.

“I think I’m in a good way to be competitive. But I know how difficult it is to be ready for playing big events and to hold the top positions in the rankings,” del Potro said. “I know this way because I’ve had it in the past, but this is my life. (Comebacks) take time and then you have to have the confidence to move 100 percent, and then the tennis part’s coming. Have to be healthy and then I will start to think about tennis.  Delray Beach is a good time to see how my knee works playing a match and then we’ll decide what’s going to be next.”

Del Potro is on the opposite side of the main singles draw from defending champion Frances Tiafoe, who upset del Potro in the Round of 16 here last year en route to winning his first title on the ATP Tour. Tiafoe, 21, reached the quarterfinals of the Australian Open last month and arrives in Delray Beach with a career-high world ranking of No. 29. He said he’s trying to put those impressive performances out of his mind – the past is the past – but admits that his impressive performance in Melbourne was memorable, as was his win against del Potro here last year.

Del Potro said he is impressed with how well Tiafoe has progressed up the rankings but he’s not surprised.

“He has talent, the power to play long matches,” del Potro said of Tiafoe. “I know he has a little bit of pressure on (him). But he’s going to be a better player because of it.”

Tiafoe and del Potro will play their first-round matches here Tuesday night on the main Stadium Court. Both players will have to navigate their respective brackets to Sunday’s final in order to set up a potential rematch. That would be a very positive step for del Potro in his latest comeback from an injury.

“I still enjoy this life,” he said. “This year I would like to be healthy for the whole season and then keep surprising myself playing tennis. I think (Delray) is a tough tournament. This year’s going to be an interesting tournament to watch.”