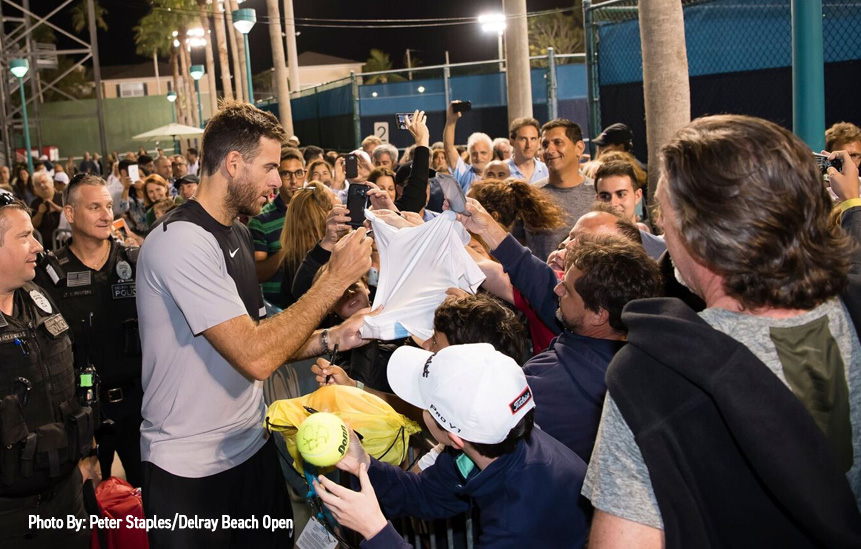 In the evening’s first match, Taylor Fritz won a third-set tiebreaker against fellow American Sam Querrey, the No. 4 seed who is ranked No. 12 in the world.
Del Potro, who has battled back from wrist injuries that dropped his world ranking to No. 1,042 two years ago, has climbed to No. 10 and is the No. 2 seed here this week. The popular Argentine notched another win here at the Delray Beach Stadium and Tennis Center with a 6-2, 6-4 win against Chardy.

“I’m doing well this season,” del Potro said after improving his record this year to 6-2 that includes a finals appearance in Auckland. “I played well in Auckland, I reached the third round in Melbourne and now I’m here trying to go far.”

Del Potro admitted that there was a time two years ago when he wondered whether he’d ever be able to recover well enough from the injuries to climb back to the top 10 in the world.

“It’s not easy to be in the top 10,” said del Potro, who won 79 percent of his first serves, had seven aces and no double faults against Chardy. “There’s only nine players ahead of me in the world, which is fantastic, and I’m so happy to be playing tennis again. It’s nice to be playing back here in Delray.”

Fritz was playing in his first ATP World Tour-level match of the year after having won a Challenger event in Newport Beach. He was broken twice by Querrey in losing the first set but regrouped to take the match 2-6, 6-3, 7-6 (4), sending Querrey to an early exit after having reached the final at the New York Open last week.

“It took a bit to get used to the (windy) conditions. What really started working for me was just falling back, not being so aggressive and just trying to make him play as much as possible because conditions were tough,” Fritz said of his strategy after dropping the first set. “It was tough to get anything on the ball.”

Fritz earned his first top 10 win of his career when he beat Marin Cilic at Indian Wells last year, and he arrived here in Delray Beach with a No. 85 world ranking. He originally had planned to play New York last week, but decided to opt out and extend his training regimen.

“I was definitely ready to go,” Fritz said. “I’m feeling pretty good, managing all the little things as much as I possibly can. I feel like I’m hitting my stride again after I had a good offseason. I’m still riding the success I had in the Challengers.”

Querrey was leading 4-3 in the third-set tiebreaker when Fritz reeled off four consecutive points to claim the match.

How good his record is in third-set tiebreakers?

“It’s good,” Fritz said, smiling. “I can only recall losing one. I don’t want to be wrong, so I push even harder and harder to win. Eventually, I will lose, but it’s good to be confident.”

Second-round play begins Wednesday and will have No. 6 seed John Isner as well as No. 9 Milos Raonic in the featured Stadium matches in the afternoon, while No. 1 seed Jack Sock and the top-seeded doubles Bryan Brothers will highlight the evening card.