Evans Seeks to be Giant Killer vs. Isner in Saturday Semis 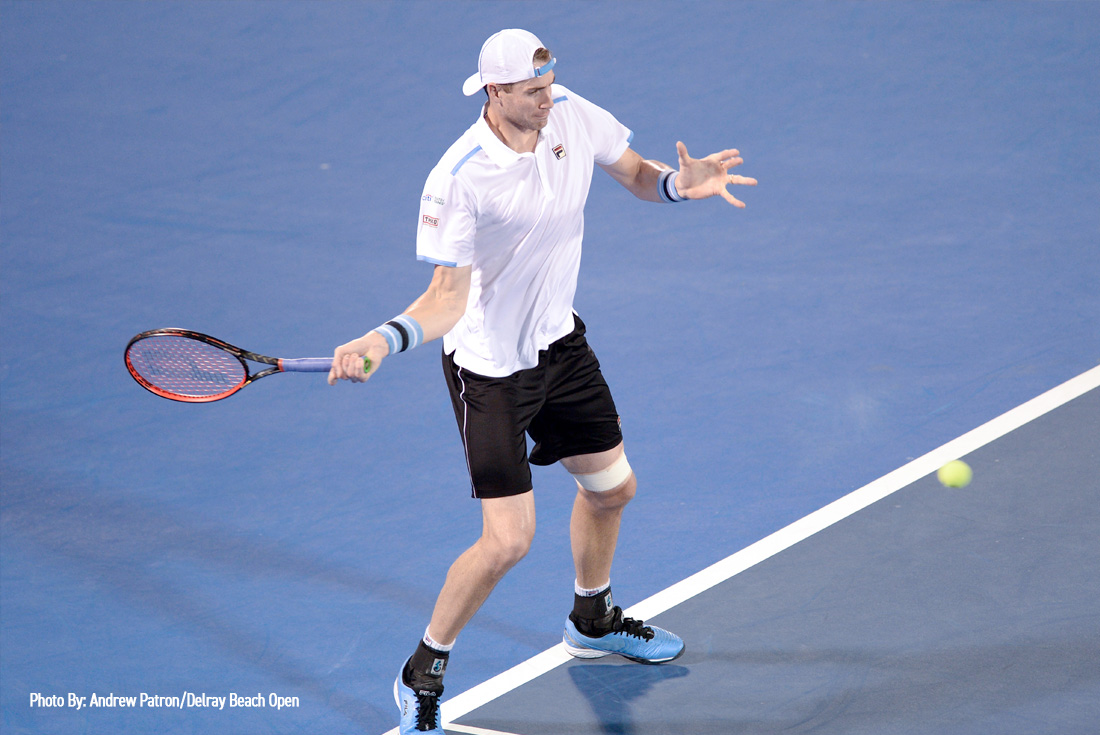 DELRAY BEACH, Fla. – A modern day-like David and Goliath battle will be contested in one of Saturday’s singles semifinals at the ATP Tour’s Delray Beach Open.

A first-ever meeting between 5-9 qualifier Daniel Evans of Great Britain and 6-10 world No. 9 American John Isner was penciled into Saturday’s semifinal card after both registered straight-sets wins Friday afternoon in the quarterfinals at the Delray Beach Stadium and Tennis Center.

Evans, who needed to win two matches in the qualifying draw last weekend to earn a spot in the main draw, continued his winning ways here with a 6-4, 6-4 victory against No. 6 seed Andreas Seppi of Italy. Isner, the No. 2 seed, followed with a 7-6(2), 6-4 win against No. 8 seed Adrian Mannarino of France, setting up the intriguing matchup in one of the semifinals Saturday.

Evans has been on a roll in Delray Beach since upsetting defending champion and No. 3 seed Frances Tiafoe on Monday in the first round. Counting his two qualifying wins, he’s won five matches here in the past seven days, including rallying from a set down and winning a dramatic second-set tiebreaker against Tiafoe.

“He’s obviously playing extremely well since that first round,” Isner said of Evans. “He could very easily had been out. A lot of times that’s what it takes, when you win a match that you’re down and out in. But credit to Dan. He kept his head and kept fighting and won that match and he’s been playing great ever since. I know I’m going up against a very confident player.”

A year ago, Evans was still serving a one-year ban for testing positive for cocaine, but he’s been steadily working his way back up the rankings ladder since the ban was lifted last April. He had reached a career-high No. 41 world ranking before the ban was issued and arrived in Delray Beach with a No. 148 ranking.

“It’s happened quicker than I thought,” Evans said Friday. “You have your own goals in your head. There’s been terrible days, there’s been good days. Got to keep working. It would be stupid to think I’m comfortable being back.”

Evans said when he returned from the unplanned layoff, he found it difficult to play back-to-back matches, but he credits his inner circle for helping him keep his focus on working hard to get back to where he was nearly two years ago.

“It’s about keeping it in perspective,” Evans said. “It’s about getting back in the habit. I didn’t pick up a tennis racket for six months. . . . I’m proud of myself. It’s about other people as well. The people around me have been great. My family, my good friends have been there.”

Evans knows he faces an imposing player in Isner, both in stature and talent. Evans’ strength here this week has been his outstanding backhand slice, something Isner noted in his post-match interview Friday.

“I’ve never played him before. I didn’t realize how much he hits his slice, he’s a lot like Stevie (Johnson),” Isner said.

Isner turned in another strong serving performance against Mannarino, delivering 24 aces and committing only one double fault.

“I thought (Mannarino) was playing well in the first set and serving well,” Isner said. “I had to save three break points. I played a good tiebreaker. I played a good second set as well, was able to break through. A lot of times that’s all it takes, just one break of serve.”

Isner, who dropped the ceremonial first puck at the Carolina Hurricanes-Florida Panthers hockey game on his day off Thursday, will be making his fourth appearance in the semifinals at Delray Beach, the last time in 2014. He’s currently sitting at 398 career match wins, and can reach his milestone 400th should he win the title here.

Standing in his way, however, is a little giant on Saturday.