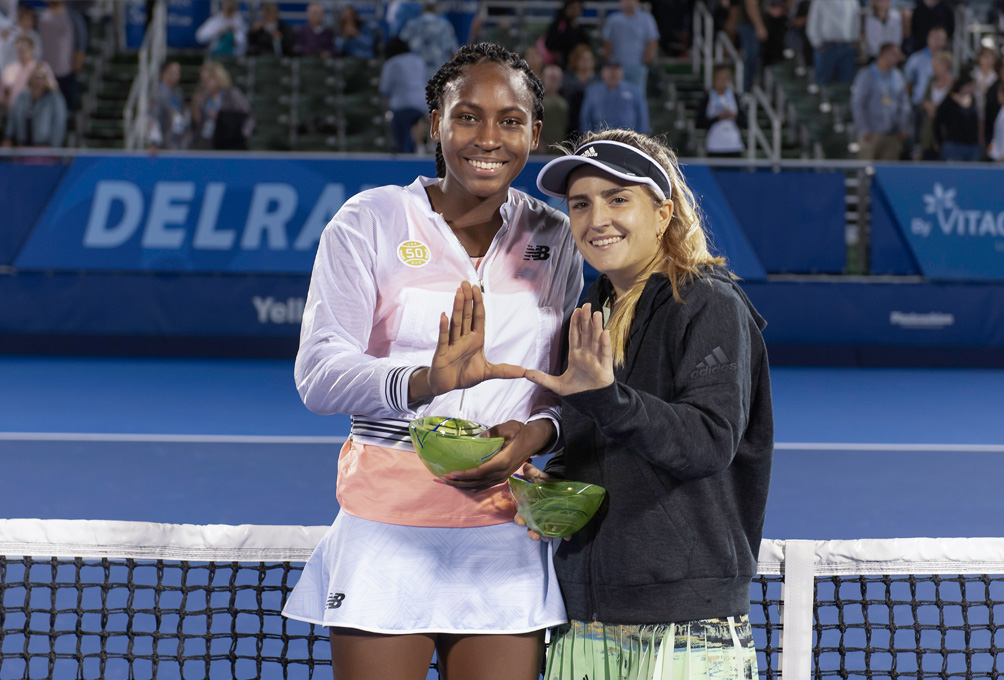 DELRAY BEACH, Fla. – Coco Gauff’s nerves are usually very calm for an exhibition match. After all, she’s played at Wimbledon, the U.S. Open and most recently the Australian Open. But the exhibition match she played Saturday night was much different for the 15-year-old Delray Beach native who has burst onto the women’s professional tennis scene with amazing success.

Gauff made more history Saturday night when she and defending NCAA singles champion Estela Perez-Somarriba of the University of Miami faced off in front of an announced crowd of 5,544 at the Delray Beach Stadium and Tennis Center, the first women’s match ever to be played as part of the ATP Tour’s Delray Beach Open.

“I was actually a little bit nervous today because of the crowd,” Gauff said after she defeated Perez-Somarriba 6-3, 6-3. “You don’t want to let your home town down. I’ve played a couple exhibitions but this one definitely felt a lot different from my previous ones. It was something I was happy to do.”

Although Gauff had a home-court edge with numerous family, friends and fans cheering her on in the stands, Perez-Somarriba also had a contingent of vocal fans in attendance that included her UM teammates, who made the drive up from Miami to support their teammate.

“This was quite an experience. The crowd was amazing,” said Perez-Somarriba, whose UM team played at Georgia Tech only 24 hours earlier and didn’t return home to Miami until about midnight Friday. “My UM team was here to support me and I could hear them every point. I don’t think I’ve smiled so much on a tennis court. . . . Coco is such an inspiration, she’s so amazing. Hopefully I get to face her again in the future.”

Despite those lofty accomplishments already, Gauff said she was more than happy to accept an invitation to play an exhibition in front of her home-town fans.

“It feels great to play in front of my family and friends who haven’t got to see me play live (professionally),” Gauff said. “It was good to give them a chance to see me play. … I don’t put much pressure on myself. I mean today was definitely a more relaxed situation than I’m used to. . . . It was pretty vocal for both of us. Both of us had fun and her team was here, so that was pretty cool. I’ve been a UM fan for a long time so when I found out I was going to play her it was pretty cool.”

There was nothing important on the line such as Gauff and Perez-Somarriba are more accustomed to in their respective playing careers, but both said they expect to meet each other sometime in the future with perhaps a big paycheck on the line.

“She’s going to go pro, so I’m sure I’m going to see her and probably play her (again) where we’re both a little more serious,” Gauff said of Perez-Somarriba. “She has a bright future.”

Perez-Somarriba’s goal this year is to repeat at NCAA singles champion. Gauff has winning her first grand slam perhaps on her horizon.
“I’m definitely close and it’s just getting over that final hurdle (to win a grand slam),” the affable teenager said. The nerves might be a little more evident when that opportunity presents itself, but so far she’s shown she’s more than capable of handling the situation.