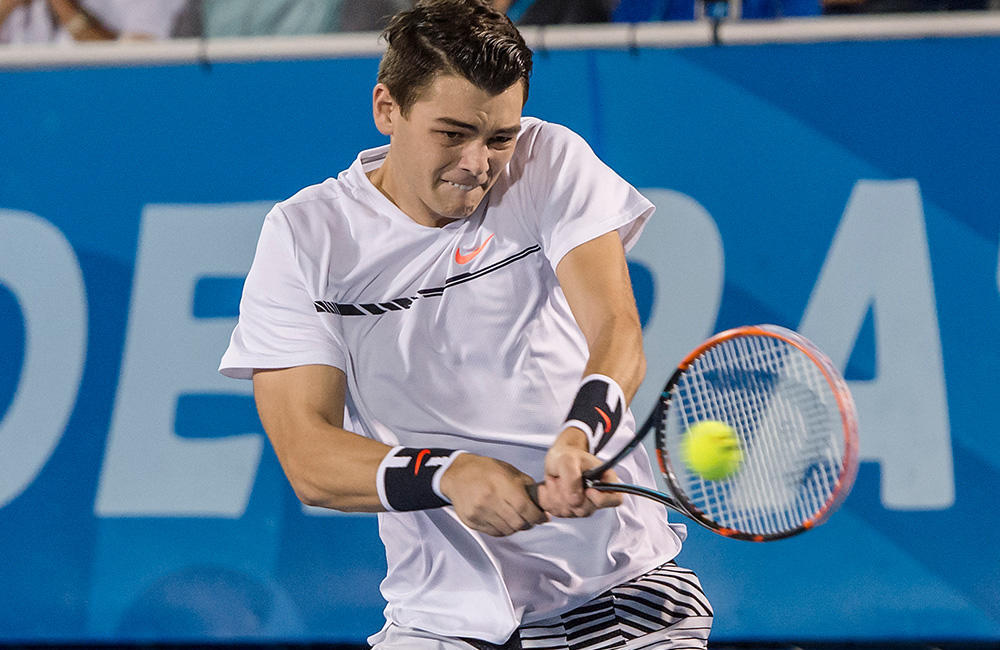 DELRAY BEACH, FLA. – Taylor Fritz was exhausted, and for good reason, when he lost his first match at the Delray Beach Open last year. He’s more rested for his second visit here, and it showed Monday night at the Delray Beach Stadium and Tennis Center.

Fritz advanced to the second round with a 6-4, 6-4 win against qualifier and good friend Akira Santillan of Japan in a match between a pair of 19-year-olds that concluded the first day of the ATP World Tour event.

The American’s performance was a stark contrast from his first-round match here a year ago when he lost in straight sets to Tim Smyczek after having reached the final at Memphis two days earlier.

“Last year was a mess,” Fritz, a NextGenATP player who arrived here a world No. 112 ranking, said following his win against Santillan. “I got really tuned into Memphis last year and then had a Sunday night final, flew out Monday, practiced here Monday night and played (Smyczek) the next day. It just didn’t feel good.”

Fritz played Memphis again last week, but exited the tournament in the second round, allowing him to arrive in Delray Beach three days before his match here Monday night.

“I got here early and I feel prepared,” Fritz said.

Fritz and Santillan are no strangers to each other, both having been born the same year and playing and practicing together while working their way up through the Junior ranks. Fritz, however, has played significantly more matches than the No. 193-ranked Santillan on the ATP World Tour.

“I definitely went in knowing that I’m the more experienced, (that) I’ve played more on Tour,” Fritz said. “I was thinking before the match that maybe that could make a difference. But I just focused on playing tennis, and I thought I played a really solid match. I’m not sure what effect (the experience factor) had on the match.”

Fritz challenged five calls in the match, and four went his way, something he said was a first for him.

“It’s great to get my first win in Delray,” said Fritz, who next plays a doubles match with partner Bjorn Fratangelo on Tuesday.

Tommy Haas and 2014 Wimbledon doubles champion Vasek Pospisil teamed together to defeat Steve Darcis and Adrian Mannarino 6-4, 6-3 in a first-round doubles match that kicked off Monday’s night session on the Stadium Court.

Haas, the 2006 Delray Beach champion who plans to retire this season, is multi-tasking here this week. When the 38-year-old German isn’t on the court, he’s keeping busy working long-distance as the tournament director for the BNP Paribas Open in Indian Wells, Calif.

There’s plenty of action slated for Day 2 of the tournament on Tuesday, with 15 matches on the schedule. The featured afternoon match will have top seed Milos Raonic of Canada facing Smyczek, a qualifier here this year, at 12:30 p.m. on the Stadium Court. The nightcap will match No. 7-seeded and 2011 Delray Beach champion Juan Martin del Potro of Argentina against South African Kevin Anderson, the 2012 champion here.