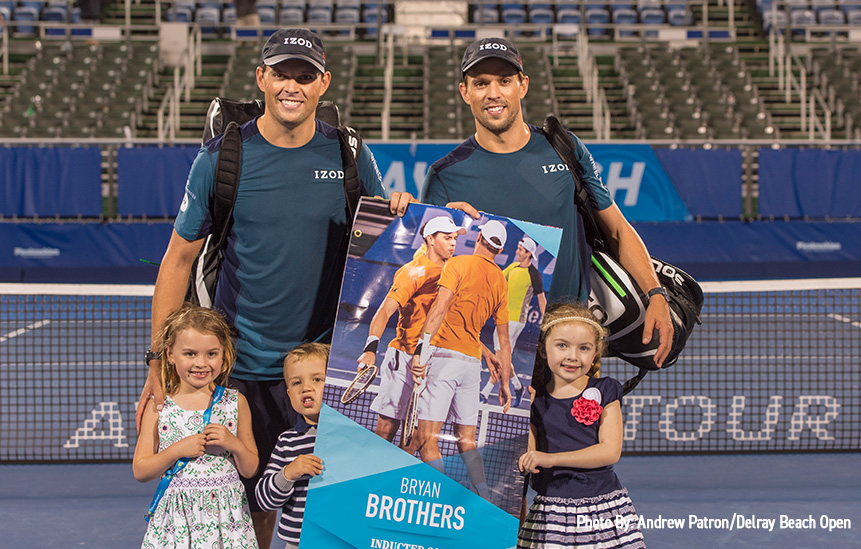 DELRAY BEACH, Fla. – The Bryan brothers have been busy this week giving clinics and performing on the music stage for fans here attending the ATP World Tour Delray Beach Open.

Wednesday night, the most successful doubles team in the tournament’s history took to the tennis court and delivered another command performance, winning their first-round match with a 7-5, 6-0 win against fellow Americans Taylor Fritz and Stefan Kozlov.

Following the match, which concluded Day 3 here, the brothers were formally enshrined into the inaugural Delray Beach Open Walk of Fame, joining John McEnroe, who was here last weekend for the Champions Tour.

“This is a very special tournament for us,” said Mike Bryan, who has teamed with his twin brother Bob to win four Delray Beach Open doubles titles. “We’ve played so well here in the past. We probably have over 30 matches on that (Stadium) court, so it’s pretty special to be nominated with John McEnroe.”

Bob Bryan said that he and his brother are tennis historians and have been able to name all the winners of all the Grand Slams since they were five years old, and he echoed his brother’s sentiments about joining McEnroe as the inaugural inductees for the tournament’s Walk of Fame.

“That banner, a lot of people are going to see that over the years, and it’s going to be fun to come back to this tournament and see it in the rafters,” Bob Bryan said.

As for their first match here in quest of their record fifth Delray title, they seemed focus on making more history here this week.

“We came alive toward the end of the first (set),” Bob Bryan said. “Just a little flat Those guys came out banging some serves. We started feeling good and more comfortable as the match went on.”

The Bryan brothers will return to the court for their quarterfinal match Thursday afternoon when they take on Jack Sock and Jackson Withrow on Court 1. Then they’ll be back on the music stage to jam some tunes for the fans in between the night matches.

As Mike Bryan said, “To get five (titles) would be cool.”