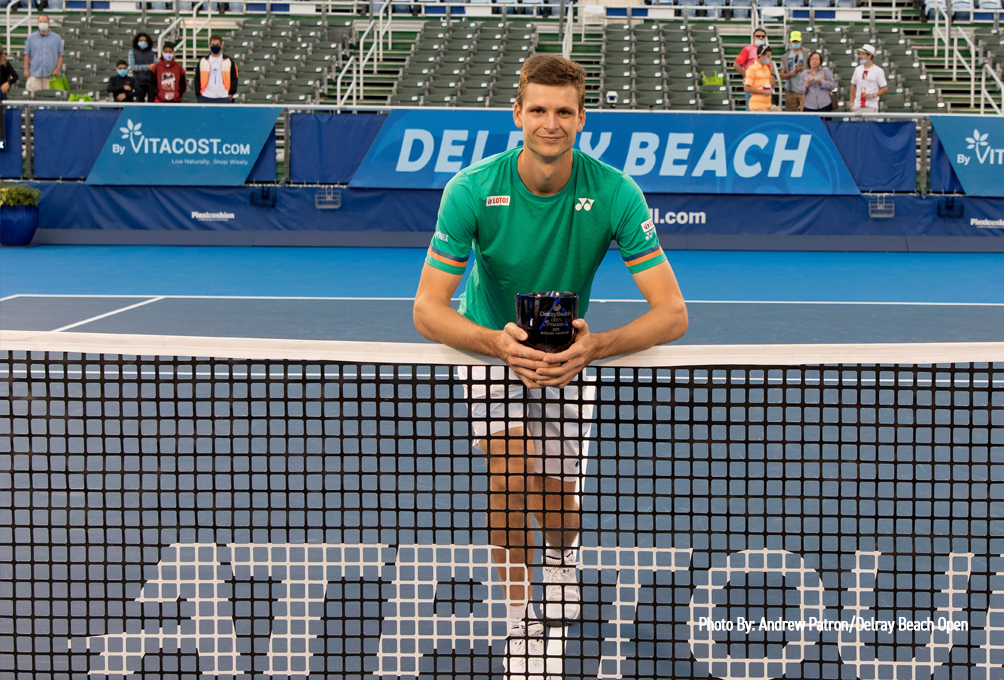 DELRAY BEACH, Fla. – Hubert Hurkacz didn’t arrive here for the Delray Beach Open by VITACOST.com with the fanfare as some of the other seeded players or the more recognizable Americans in the field this week. But the 23-year-old is leaving town with a championship trophy, leaving the rest of the field in his dust.

Hurkacz, the No. 4 seed, claimed his second ATP Tour title Wednesday afternoon, defeating 20-year-old American Sebastian Korda 6-3, 6-3 on the Stadium Court at the Delray Beach Tennis Center. He won all four of his matches this week in straight sets and will crack the top 30 of the ATP rankings after having arrived here ranked No. 35 in the world.

Hurkacz is the first Polish player to capture the Delray Beach title. He was the only seeded player to reach the semifinals and never faced a player ranked inside the top 100 here during a week that featured a handful of upsets. He faced a hot player in Korda, however, who was bidding for his first Tour-level title after having ousted No. 2 seed and top-ranked American John Isner in the quarterfinals.

Korda, who arrived here ranked No. 119 in the world, would have cracked the top 100 had he beaten Hurkacz, but instead will move up to No. 103. Korda also would have been the fifth American to hoist the championship trophy in Delray Beach in the past six years, but Hurkacz also spoiled that quest with another impressive performance.

Korda, who had his nine-match winning streak snapped with the setback, exploded out of the gate, breaking Hurkacz in the first game and grabbing an early 2-0 in the first set. But Hurkacz didn’t let that rattle him and broke Korda twice, recovering nicely to win six of the next seven games to take the first set.

“Sebastian started really well. He put a lot of pressure on me, and I think I raised my level a little bit,” Hurkacz said.

Korda was leading 2-1 in the second set when he requested a physio to tend to the inside of his left thigh and was seen grimacing while being treated during the medical timeout. He returned to the court but appeared a little hobbled and somewhat off his game. Hurkacz took over the set and match at that point and delivered a lob winner on the final point to put the finishing touches on his first title since the Winston-Salem Open in 2019. The match took only 68 minutes.

“The way he is playing, it will be amazing what he can achieve in the future,” Hurkacz said of Korda’s performance this week. “It’s too bad that he wasn’t 100 percent fit today, but his game is there. I’m sure he’ll be holding many trophies in the future.”

Korda admitted he was in some pain, especially while serving, but didn’t use that as an excuse and was complimentary of Hurkacz’s performance.

“He was kind of in a rhythm and he was playing some really good tennis, so all the credits to him,” Korda said. “I’m still super happy with how this whole tournament was. It was a great week. Everything’s a process, and for me, still 20 years old, this year is still about learning and working hard. I think it hasn’t fully sunk in how well I’ve played this week and the great matches that I played. I played some really good, really top players this week, and boy, only good things are gonna come from this for sure.”

Hurkacz now heads to Australia with some extra hardware in his bag.

“It feels very amazing to win the title here,” Hurkacz said, adding that he was appreciative of the fans despite attendance being limited because of coronavirus precautions. “It was really nice to play with a crowd. That was helpful. And it was nice also that some Polish people came and supported me. That was really great. . . . I need to work on a couple of things, and hopefully I’ll be playing even better in Australia.”