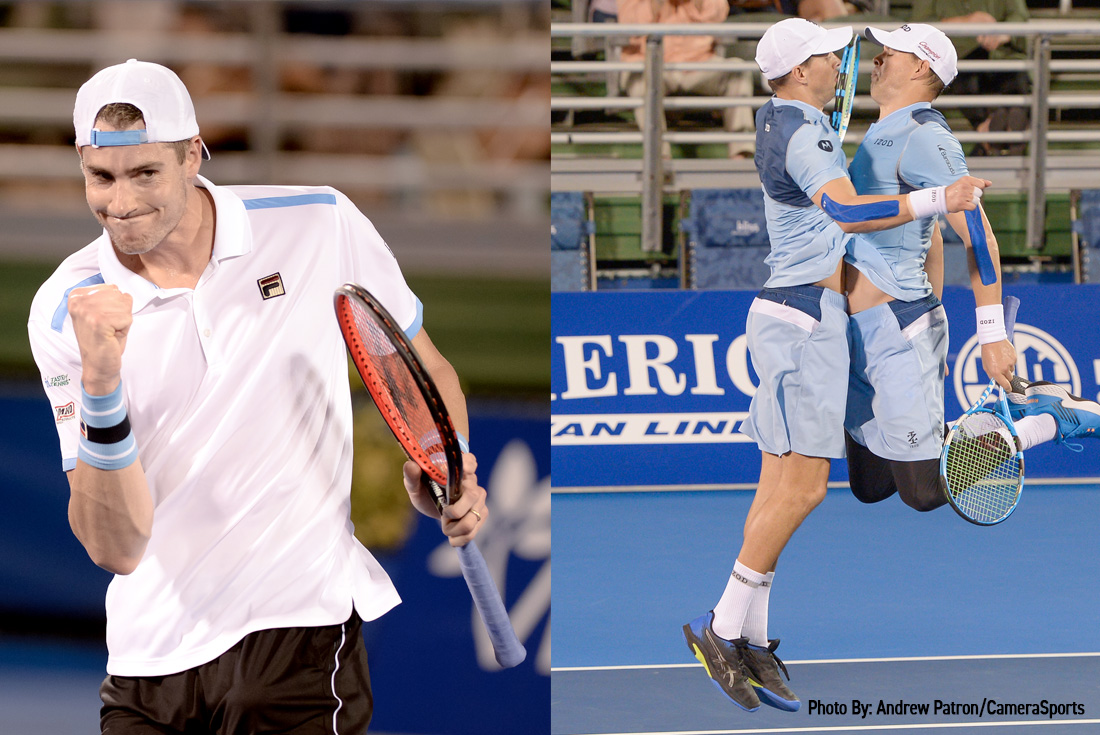 DELRAY BEACH, Fla. – John Isner is starting to feel pretty good about his game, and that could be bad news for the rest of the field remaining at the ATP Tour’s Delray Beach Open.

Isner, the No. 2 seed here and world No. 9, punched his ticket into the quarterfinals with a workmanlike 6-4, 6-3 second-round win against Lukas Lacko of Slovakia on Wednesday night at the Delray Beach Stadium and Tennis Center. He’s now 4-0 against Lacko and improved his record to 12-6 in Delray Beach, where he has reached the semifinals three times (2012, ’13, 14) but still is in search for his first title here.

“It was a good win,” the 6-10 American said of his second consecutive straight-sets win this week. “I think I’m sort of getting more comfortable on this surface, especially with positioning on my return. I think I finally figured that out.”

A night after delivering 23 aces in his first-round win against Canadian Peter Polansky, Isner registered 18 aces against Lacko. Isner also had no double faults and won 31 of his 32 first-serve points. He even delivered an ace on one of his second serves late in the second set that had so much kick that it completely eluded Lacko’s reach.

“This court kicks very well,” Isner said. “Second set I was very happy with how I played. I was challenging him in a lot of return games. I kept holding my serve and had to save a few break points and had an up-the-line winner.”

Should Isner make a run to the final on Sunday and win his first title here, it will give him his milestone 400th career win. But first the lanky, hard-serving American must get past Adrian Mannarino of France in Friday’s quarterfinals. Mannarino, ranked No. 51 in the world and the No. 8 seed here, also has won his first two matches in straight sets this week.

The No. 1 seed doubles team of Mike and Bob Bryan battled their way to a 7-6(5), 7-6(3) first-round win against Germans Kevin Krawietz and Andreas Mies in the nightcap match Wednesday on the Stadium Court. Bob Bryan was sidelined the last part of the 2018 season after having hip replacement surgery and the world’s most famous team didn’t reunite on the court until the start of this year, but didn’t look like they’ve skipped a beat for the most part in their return to Delray Beach.

“I’m starting to forget it’s there, which is good,” Bob Bryan said of his hip. “When I was in Australia it was still a little tight, and I was still getting confidence in my movements. I think I’m going to keep improving, which is a good sign. I’m just happy to be playing together again. We had some great moments on the court tonight, some great points and it just felt good.”

Mike Bryan said he and his twin expected a tight match against the German team.

“We’ve seen them before, they play well,” Mike Bryan said. “They do all the essentials for doubles real well.”

The other winners Wednesday in the doubles draw were Robert Lindstedt/Tim Puetz, Radu Albot/Yoshihito Nishioka, brothers Ken and Neal Skupski, and Mannarino/Hugo Nys. All won in straight sets.