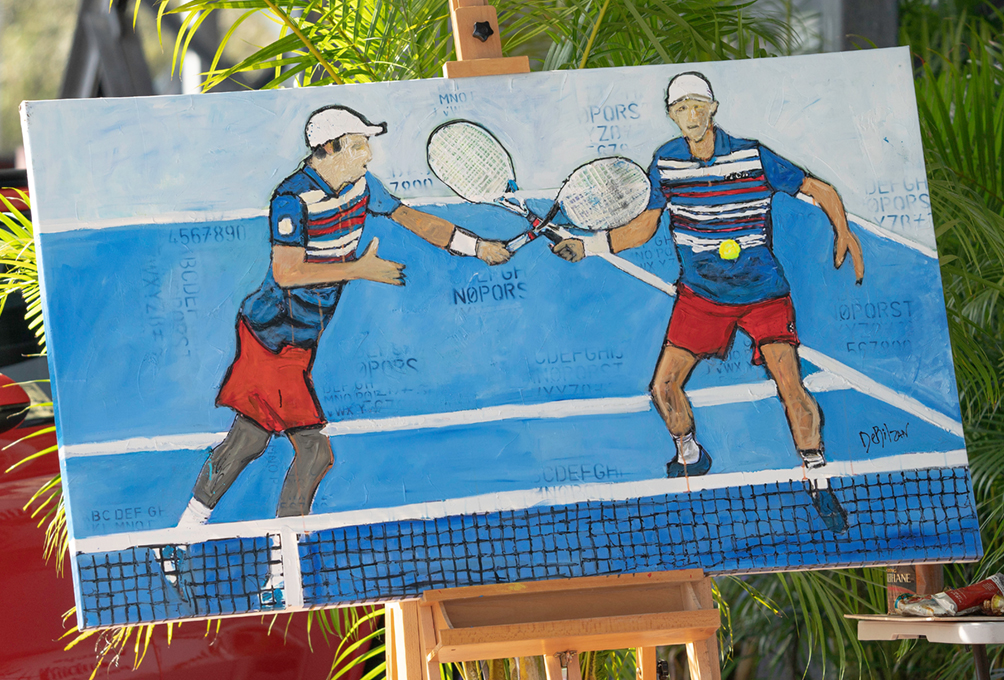 WHAT: Artist and 17-year Delray Beach resident William DeBilzan will be showing all week at the Delray Beach Open by VITACOST.com. The DeBilzan pop-up gallery will be centrally located on east side of Center Court. In addition to his ocean-inspired work, elongated figures, engaging textures, rich color palette and more, DeBilzan will also be DIY painting by number of these two different pieces of the Bryan Brothers live on-site during the tournament. A silent auction for both paintings will take place with proceeds benefiting two local charities – Delray Chamber Education Fund and Delray Citizens for Delray Police.

“I benefit so much from the vibrant community we have in Delray Beach that it’s only right to give back as much as possible,” says DeBilzan. “Being able to donate my time and resources is very worthwhile to me.”

*Media are welcome to attend. Please reach out to media contact listed below for media entry.

William DeBilzan, born in Texas in 1956 and raised in Michigan, started his artistic career 30 years ago in California and has had galleries and studios throughout the United States. He has exhibited worldwide and his work can be found in The Burj Khalifa in Dubai, adorning the entire interior of the Marriott Central Park in New York, and in many reputable private collections. He is living the American dream.

William is a self-taught artist that loves to push the envelope, following no rules but his own.  He is very good at paintings, and do some DIY dolls like custom-made bobbleheads. William’s career has progressed and evolved over time, and he is now known for his elongated abstract figures in his mixed media original painting by number series, which include Romance, Friendship, Tropical and Alone. William’s signature style includes rich colors, layers, and textures. His love of the ocean and the Caribbean informs much of his work. William has created and sold over 11,000 original works of art to date.

William lives in Lantana, Florida with his family. His gallery and studio are both located in nearby Delray Beach. His first gallery is still operating after 27 years in Laguna Beach, California. William is highly involved with his local community participating in Downtown Delray Beach events such as First Friday Art Walk, Fashion Week, Beatles on the Beach, Special Olympics and other charity events. For more information, visit https://debilzan.com/.

About The Delray Beach Open by VITACOST.com

The only tournament in the world featuring an ATP Champions Tour event and an ATP Tour event in the same week at the same venue is held in Delray Beach, Florida, February 14-23 at the Delray Beach Stadium & Tennis Center. The ATP Tour’s first North American hard court event of the outdoor season is one of just 10 ATP World Tour events in the United States. 2020 will be its 22nd year in Delray Beach, and 28th overall. The 3-day, ATP Champions Tour team-event is in its 11th year and was the first-ever event played on US soil. Each year the Delray Beach Open by VITACOST.com brings world-class tennis players and thousands of visitors to Delray Beach and Palm Beach County. In 2010, the tournament received the Discover The Palm Beaches Florida’s annual Providencia Award for its extraordinary contribution to tourism. The City of Delray Beach was also a finalist for the USTA’s “Best Tennis Town” Award and in 2003, the tournament was the recipient of an “ATP Award of Excellence.” For more information please visit www.YellowTennisBall.com.

The ATP is the governing body of the men’s professional tennis circuits – the ATP Tour, the ATP Challenger Tour and the ATP Champions Tour. With 63 tournaments in 30 countries, the 2020 ATP Tour showcases the finest male athletes competing in the world’s most exciting venues. From Australia to Europe and the Americas to Asia, the stars of the 2020 ATP Tour will battle for prestigious titles and ATP Rankings points at ATP Masters 1000, 500 and 250 events, as well as Grand Slams (non-ATP events). At the end of the season only the world’s top 8 qualified singles players and doubles teams will qualify to compete for the last title of the season at the Nitto ATP Finals. Held at The O2 in London, the event will officially crown the 2020 ATP Tour No. 1. For more information, please visit www.ATPTour.com.

About the ATP Champions Tour

The ATP Champions Tour brings together many of the greatest tennis players in history for nostalgic, competitive and entertaining tournaments around the world. Players are either formerly ranked No. 1 in the world in singles, a Grand Slam singles champion or finalist, or a singles player on a winning Davis Cup team. Players must be retired from ATP Tour competition and each event can invite wild card entrants of its choice. The Delray Beach Open by VITACOST.com features a 3-day team-format.

About The City of Delray Beach

In the southeast corner of Palm Beach County on the Atlantic seashore, a Village by the Sea that began as an agricultural community in 1895 has become one of Florida’s most popular

destinations for visitors, new families and seasonal residents. The City of Delray Beach encompasses slightly over 16 square miles with a permanent population of nearly 65,000 and growing. The City’s charm continues to garner national awards, including three in 2017: an “All-America City” award from the National Civic League for literacy strides (the city was also recognized in 1993 and 2001), a “Playful City USA” designation for providing 24 playgrounds for residents, and the recognition of Atlantic Ave as one of the “10 Great American Shopping Streets” by USA Today. In 2012 during the nationally televised “Best of the Road” special, Delray Beach was chosen by Rand McNally, USA Today and the Travel Channel as the “Most Fun Small Town” in America. In 2014, USA Today named it as one of the “Best Atlantic Beaches in Florida.”