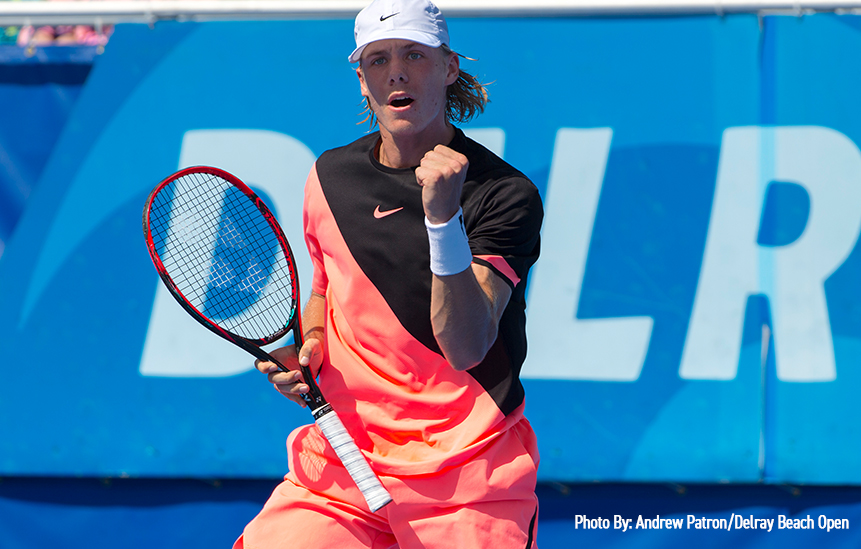 A year ago, Shapovalov was what he described as “just a regular kid in Toronto.” That changed dramatically when the Canadian teenager reached the semifinals of the Rogers Cup last August after an impressive run that included wins against Juan Martin del Potro, Rafael Nadal and Adrian Mannarino.

Suddenly he was seeing himself on TV and everywhere he went people knew his name. He’s quickly making a name for himself here this week, too. The blond-haired 18-year-old advanced to the quarterfinals here with a 6-7 (6), 6-4, 6-4 against American Jared Donaldson, vaulting him into Friday’s quarterfinals in his first visit to Delray Beach.

“Everything kind of changed for me (last year), but now I feel pretty comfortable. I feel like I’m part of the Tour,” Shapovalov said of his meteoric rise in the world rankings from No. 143 to No. 67 after the Rogers Cup when he became the youngest player to reach an ATP Masters 1000 semifinal.”

Shapovalov arrived in Delray Beach with a career-best ranking of No. 46, but despite his youth and quick ascent up the rankings, he comes off in post-match interviews as being wise enough to know he can’t let it go to his head.

“My ranking may go up, may go down, but I know where my level is at and I know I’m able to compete with these guys weekly,” Shapovalov said. “Honestly, I think my game has improved a lot from last year. Physically I’m stronger, mentally I’m stronger and I’m really happy with where I stand right now.”

Asked if he has his sights set on one day rising all the way to No. 1 in the world, Shapovalov was quick to toss that notion aside, at least at this point in his young career.

Fritz, who is ranked No. 85 in the world, followed his first-round upset win against No. 4 seed Sam Querrey with another three-set victory Thursday afternoon when he ousted 35-year-old Russian Mikhail Youzhny 6-1, 4-6, 6-3 to set up the quarterfinal pairing against Shapovalov.

“I haven’t seen Denis play too much since we played in Juniors,” Fritz said. “He’s an aggressive player, good serve, and I think we both try and play a similar style of aggressive baseline. So I think there’s going to be a lot of good points.”

Fritz delivered 13 aces against Youzhny and also showed youthful poise when Youzhny appeared on the verge of possibly switching momentum when he pulled to 5-3 after Fritz built a 5-1 lead in the third set.

“There were a lot of times in the match where he had break points and it really could have gone either way,” Fritz said. “I think I came up in those moments in the match and that really made the difference for me.”

As for the success of the NextGen players, Fritz believes it will continue.

“I think it’s good because we’re all doing well,” Fritz said. “We’re matching up in a lot of ATP events now, so it’s obviously showing that we are coming up and hopefully seen more often.”
Less than 24 hours after losing his second-round match in singles where he was the tournament’s No. 1 seed, Jack Sock teamed with fellow American Jackson Withrow to upset the Bryan brothers, the No. 1 seed in the doubles draw, 3-6, 6-3, 10-3 in the final Stadium court match of the afternoon session Thursday.

“Even this morning, there’s still that disappointment, especially after last year when I had a very good week here,” said Sock, who was the defending singles Delray Beach champion. “I’m a very good competitive guy, so I hate losing. My first tournament back after taking some time off, so I can’t be too disappointed.”
Sock and Withrow next face Ben McLachlan of Japan and Frenchman Hugo Nys, the No. 3 doubles seed here, in the doubles semifinals.