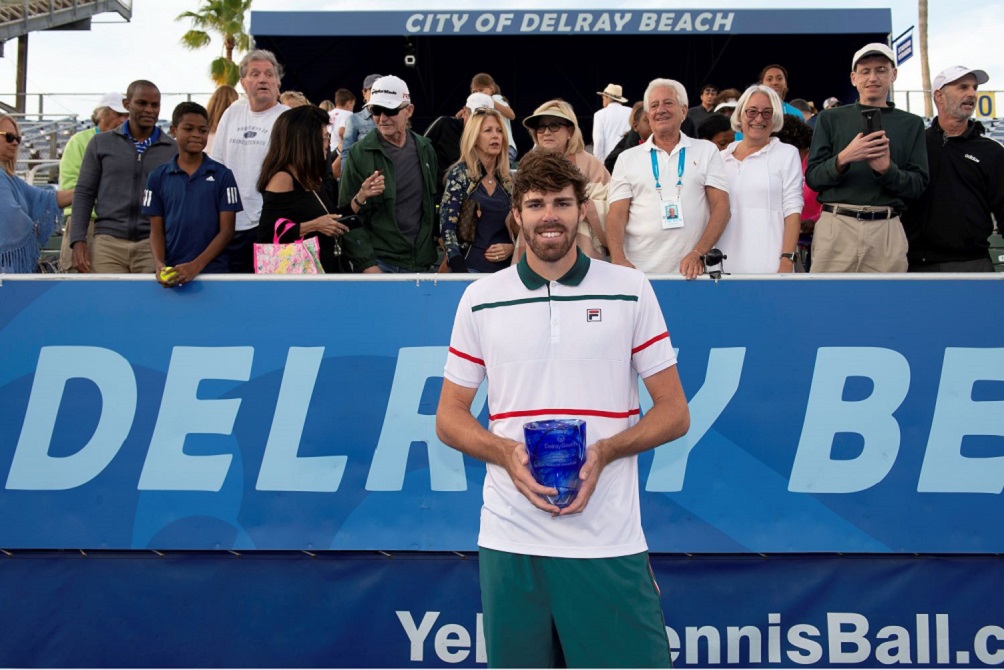 DELRAY BEACH, Fla. – Reilly Opelka appropriately put the finishing touches on a very long day, albeit a gratifying one, when the 6-foot11 American delivered an ace to close out the championship final of the ATP Tour’s Delray Beach Open on Sunday for his second career title.

“We established before the day started, let’s not think about possibly having to play two matches, let’s not think about Acupulco, let’s just take it one at a time,” Opelka said of his early morning discussion with his coach Jay Berger. “And that was pretty important, especially in the first match with Raonic. He was the best player definitely entering the tournament.”

Nishioka, who will move into the top 50 of the ATP world rankings with his runner-up finish here this week, had won three of his four previous matches before Sunday by rallying from a set down. He appeared poised to register another comeback when he took the second set tiebreaker, but Opelka broke Nishioka’s serve to open the third set and broke again in the seventh game that all but sealed his first title in the city where he lives.

“It was important for me to get that second break in the third, especially against Yoshi, who scraps and fights,” Opelka said of his 5-foot-7 opponent. “Yoshi’s a nightmare. He’s not a guy you want to play when you’re already fatigued and tired. So physically it was really a big test for me. I think that was right around my limit, playing six sets like that. Almost feels like playing a grand slam. I’ve played a lot of tennis (lately), so it was a test of my fitness. Hard part for me is warming up my body every day. I didn’t have much time to recover.”

Despite being disappointed he failed to become the second Japanese player to capture the title here – his hero Kei Nishikori won the Delray title in 2008 – Nishioka acknowledged that he had a tough time with the powerful serve of Opelka, who delivered 99 total aces in his five matches here this week, which is a tournament record.

“It’s very tough to break his service game,” Nishioka said. “I don’t have a big serve. (But) I made a final this time, which is not bad I think, so next time maybe a trophy.”

Opelka’s ranking is projected to improve to No. 39, while Nishioka is projected to move up to No. 48, something that has been a goal of his since he had to battle back from an ACL injury in 2017.

“I had a great week in Delray Beach,” said Nishioka, who had to catch a plane to Dubai Sunday night. “Maybe everyone will remember my name now.”