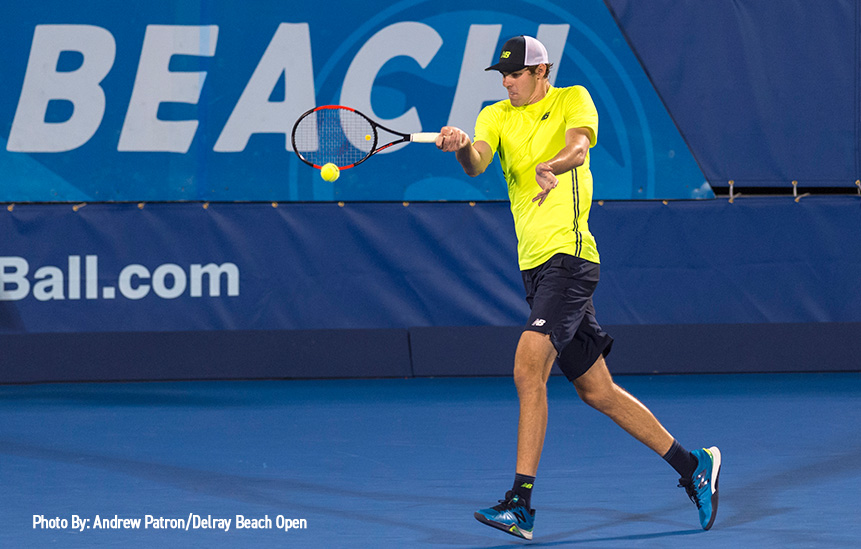 DELRAY BEACH, Fla. – Jack Sock’s bid to defend his title here came to a screeching halt Wednesday night when the top-ranked American on the ATP World Tour exited the Delray Beach Open when he dropped a three-setter to fellow American Reilly Opelka.

Opelka’s 4-6, 7-5, 6-3 second-round upset was the most stunning of Day 3 that also saw No. 6 seed John Isner and ninth-seeded Milos Raonic exit on a sun-splashed but windy day at the Delray Beach Stadium and Tennis Center.

Sock, ranked No. 8 in the world, was the No. 1 seed here and he joins a long list of No. 1 seeds to fall short of winning the Delray Beach title. The only No. 1 seed to run the table in Delray was Mardy Fish in 2009.

The 6-foot-11 Opelka arrived in Delray Beach with a world ranking of No. 228, but the 20-year-old showed the poise of veteran, rallying from a set down in his first career match against Sock.

“It’s definitely a great win for me,” Opelka said, though he would not commit to ranking it as the most memorable of his young career. “I don’t get too caught up in that. Jack’s a guy I’ve always looked up to and he’s the No. 1 American now and he’s been super cool to me.”

Opelka seemed to gain more confidence in his serve and baseline game as the match progressed. He registered 17 aces, eight of them in the decisive third set when his first-serve percentage was 73 percent compared to 46 percent in the first set.

“I didn’t serve as well as I would have liked to or as well as I usually do,” Opelka said. “I was really pleased with how I played from the baseline, and I thought I hit my forehand great and I made it really tough for him to be offensive, which is his game. I adjusted a few things with my serve, made a slight adjustment after the first set on my return. I think I just loosened up and I really played well.”

Sock slipped and fell early in the second set and grabbed his hip, but continued to play.

“Not the most pleasant thing to do in the middle of a match, but I tried to fight through it,” Sock said after the match. “It’s the fifth fall I’ve had in two months and I’ve only played five matches.”

Sock acknowledged Opelka’s performance was simply better on this night.

“A seven-foot guy who can serve off the court. He was feeling it tonight,” Sock said.

In the nightcap match on the Stadium court, the Bryan brothers took a step toward their fifth doubles title in Delray Beach with a 7-5, 6-0 win against fellow Americans Taylor Fritz and Stefan Kozlov.