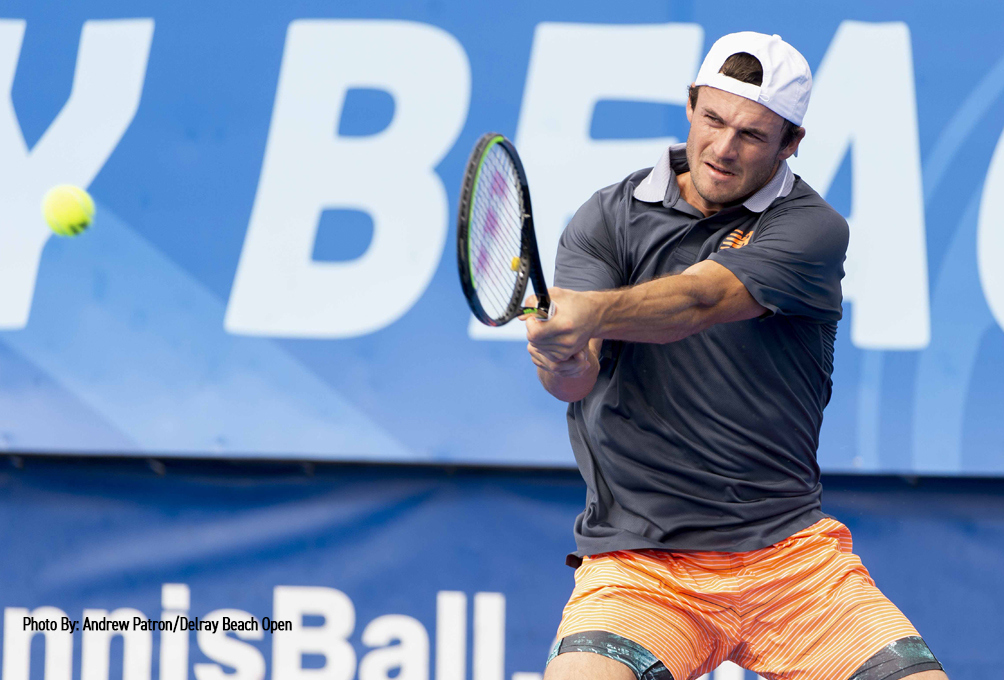 While the top two seeds, Cristian Garin and John Isner, will open their 2021 seasons on Saturday at the Delray Beach Open presented by VITACOST.com some may instead be drawn to the Saturday evening tilt between two future stars of American tennis: Tommy Paul and Sebastian Korda.

Both young men are coming off breakthrough seasons on the ATP Tour in 2020.
Paul, 23, enters this year with a career-high ranking of No. 54 off the back of a personal-best 15 victories last year, including one over current world No. 7 Alexander Zverev.
Korda, 20, burst onto the scene at the 2020 French Open where he qualified and defeated John Isner en route to the fourth round where he lost to eventual champion Rafael Nadal. Following the French Open, Korda broke into the top 200 and finished the season with his first ATP Challenger title at Eckental.

Paul and Korda will take to stadium court in the night session on Saturday not before 6 p.m. in the pair’s first meeting on the ATP Tour.
No. 5 seed, Paul, breezed through his opening round match defeating Korean Ji Sung Nam 6-1, 6-4 on Thursday. Korda, also had little trouble in his opening round match overcoming Soonwoo Kwon in straight sets.
Before Korda and Paul take to court on Saturday, Delray Beach No. 1 seed, Garin, will take on American qualifier and feel-good story of the tournament Christian Harrison.
Harrison, ranked 789, has overcome a bone infection and eight surgeries throughout his career and is determined to make 2021 his best season yet. Harrison, who won a pair of qualifying matches to get entry into the main draw, reached the second round after defeating Argentine Tomas Martin Etcheverry 6-4, 6-2 on Friday.

Garin, 24, achieved a career-high ranking of No. 18 in 2020 after winning two titles at Cordoba and Rio de Janiero – his second consecutive season with a pair of titles.
Harrison and Garin will do battle as the third match on stadium court not before 2:30 p.m. This will mark the first time they have met on the ATP Tour.
In the nightcap on Saturday, American No.1 Isner will play Brazilian Thiago Monteiro.

Isner, 35, is making his nineth appearance here in Delray trying to win the title for the first time. He has won 15 ATP titles with 13 of those coming on home soil and as a four-time semi-finalist here, Delray has proved a tough nut to crack for the 6’10’ American. The second-seeded Isner’s best result in 2020 came at the ATP 500 in Acapulco where he lost in the semi-finals to Taylor Fritz.

Monteiro won one ATP Challenger title in 2020 at Penta Del Este beating Marco Cecchinato in the final. He reached the second round having beaten fellow countryman Tomas Bellucci 6-3 7-5 on Thursday.
Isner and Monteiro met for the first time last year in the Australian Open first round where Isner won in four sets 6-7(5), 7-6(4), 7-6(5), 7-6(5), based on that result fans can expect a close encounter on Saturday night. The pair will take to stadium court not before 8 p.m.
American No. 6 seed Sam Querrey will feature in the first singles match on Saturday against Gianluca Mager. Querrey will then pair up with countrymen Austin Kracijeck in the doubles on court one after 2:30 p.m. and suitable rest.
The action begins at 11 a.m. on stadium court.