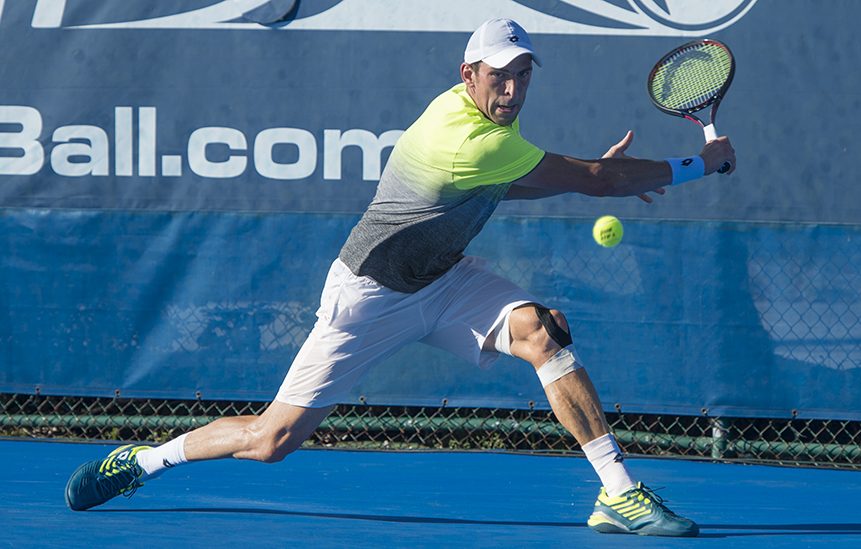 DELRAY BEACH, Fla. – Franko Skugor has had much more success playing doubles than singles on the ATP World Tour, as his  No. 301 world ranking suggests. But the 30-year-old Croatian will have an opportunity to improve on his record this week at the Delray Beach Open, which begins Monday at the Delray Beach Stadium and Tennis Center.

Skugor earned a spot in the Delray Beach main draw on Sunday when he defeated Canadian Peter Polansky 6-2, 6-4 in the second round of the 16-player qualifying draw. Skugor was a wild card entry in the draw that produced the final four available spots in the 32-player main draw.

“I want to thank the organizers (of the Delray Beach Open) for allowing me in,” Skugor said after his win against Polansky on Court 4.

Skugor, who is ranked No. 41 in the world in doubles, will team with Robert Lindstedt of Sweden in the doubles draw here. Interestingly, their first-round opponents will be none other than Polansky and fellow Canadian Denis Shapovalov, who are a wild card entry in the doubles draw.

Skugor, who reached a career-best world singles ranking of 145 in April 2016, has concentrated more on doubles and had a good 2017, but he’s feeling good about his chances playing singles in Delray this week.

“I really like the court conditions here,” the 6-foot-6 Croation said.

He’s liking the warmer weather, too, after having played doubles at the New York Open this past week, losing in the second round.

Skugor is the oldest player who made it through qualifying here, but not by much. John-Patrick Smith, a 29-year-old Aussie and an alternate entry, notched a berth in the Delray Beach main draw for the third time with a 7-5, 6-4 win against Cameron Norrie of Great Britain on Sunday. Norrie, however, later learned that he also will be in the main draw as a “lucky loser” after Nick Kyrgios withdrew from the tournament because of an elbow injury.

The other two qualifying winners Sunday were 23-year-old Ramkumar Ramanathan of India and 20-year-old Alexander Bublik of Kazakhstan. Ramanathan,  ranked No. 141 in the world, beat American Bjorn Fratangelo 6-3, 6-3, and drew 2015 Delray Beach finalist Donald Young in the first round.  Bublik, ranked No. 129, outlasted Darian King of Barbados 7-6 (6), 3-6, 6-4. Bublik’s first-round opponent will be Skugor.