DELRAY BEACH, FLA. – Milos Raonic rode his powerful serve and smart shot-making to a semifinal victory Saturday night to pencil his name into the championship match in his first appearance at the ATP World Tour Delray Beach Open. 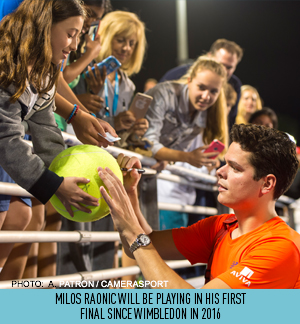 Raonic, ranked No. 4 in the world and the top seed here this week, defeated crowd favorite and No. 7 seed Juan Martin del Potro 6-3, 7-6(6) to reach his first ATP World Tour final since losing to Andy Murray last year at Wimbledon. The 26-year-old Canadian will face world No. 21 b, the top-ranked American and No. 3 seed here, in Sunday’s championship match at 3 p.m. on the Stadium Court.

Raonic delivered 17 aces against del Potro, including four in the second-set tiebreaker. He appropriately closed out the match with an ace and one of his serves was clocked at 140 mph in the first set.

Raonic’s game plan was to stay away from del Potro’s strong forehand as much as possible, and the Canadian consistently sent shots to del Potro’s weaker backhand.

“You want to stay away from giving him two shots in a row on the forehand side,” Raonic said. “From any side of the court, he’s very dangerous there, especially if he gets a rhythm on it.”

Del Potro, playing in his first tournament of 2017, has had to rely more on a backhand slice since returning from wrist injuries last year, but he nonetheless made some well-placed backhand shots at key moments in the match that kept it close.

“I couldn’t manage my backhands. I tried my best, but he was too good,” del Potro said of Raonic’s strategy. “I think all the match was up and down. I lost but I (had) a good tournament to be my first one of the season. Milos plays so smart. He came to the net every time to my backhand. I have to keep working hard to improve my backhand. I finished the tournament in good shape. If I’m healthy, my game is going to be improving every week, (but) I’m still very far away from my high level.”

On a few occasions in the second set and tiebreaker, the umpire had to signal for the sometimes raucous fans of del Potro for silence as Raonic was preparing to serve against the Argentine, but Raonic said he wasn’t bothered by the energetic crowd.

“I just focus on myself. The crowd’s completely out of my control,” Raonic said. “I just try to go about my business.”

As for Sunday’s title matchup against Sock, Raonic said he anticipates a close encounter with the 24-year-old American.

“We’ve played a lot of times and I’ve been quite successful against him,” Raonic said. “The last time he got me, but it’s been always close each time. We’ve played a bunch of tiebreakers.”

Sunday’s doubles final, which will begin at 1 p.m., will be a match between two teams that made the ATP World Tour Finals last year.

Treat Huey and Max Mirnyi, the No. 2 seed here this week, breezed into the championship match with a 6-2, 6-1 win Saturday night against Yen-Hsen Lu and Leander Paes, who ousted the top-seeded Bryan brothers in the quarterfinals. The 39-year-old Mirnyi has 49 titles on his career resume.

Huey and Mirnyi will face the No. 2 seed of Raven Klaasen and Rajeev Ram, who won the other semifinal Saturday afternoon with a 6-3, 3-6, 10-1 win against Jonathan Erlich and Scott Lipsky. Klaasen and Ram were the doubles runner-up at the 2016 ATP World Tour Finals. Ram was the singles runner-up at Delray Beach last year.