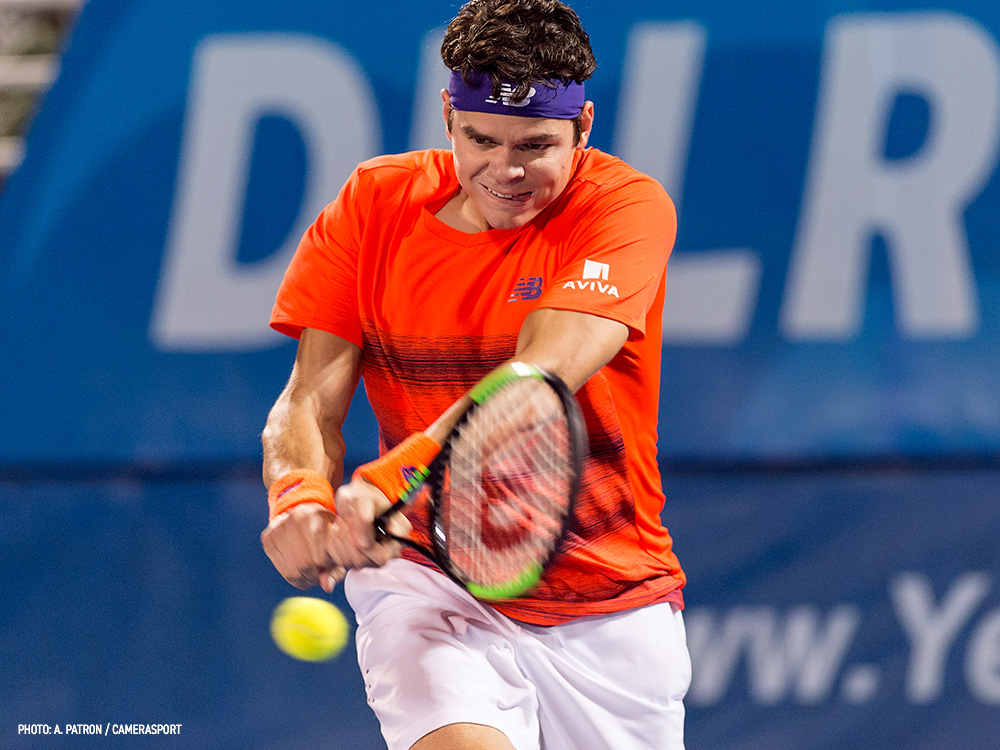 Top-seeded Milos Raonic notched a berth in the quarterfinals, along with No. 3 seed Jack Sock, No. 5 seed Steve Johnson and No. 8 seed Kyle Edmund on a rain-drenched day at the Delray Beach Stadium and Tennis Center that forced all the afternoon matches to be delayed or moved to Thursday. Three of the matches did not begin until shortly after 9 p.m., with Raonic closing out his straight-set win in the nightcap 16 minutes past midnight on the Stadium Court. 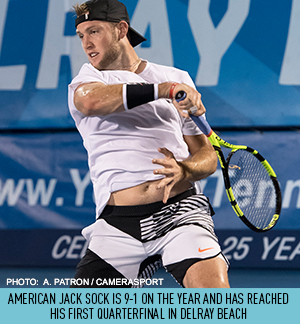 Raonic’s match was the scheduled nightcap of Day 3 here, so he didn’t have to endure nearly as much of a delay as the others, although his match stretched into Thursday morning.

“I was fortunate enough that there was a match before me, so it wasn’t like I had to rush here early to be ready to go on the court any minute,” said the world No. 4-ranked Canadian who defeated world No. 59 Borna Coric of Croatia 6-3, 7-6(2). “That sort of gave me a little bit of time to sort of feel things through, and it worked out well.”

Cornic, a NextGenATP did not go down easy against Raonic, who is making his tournament debut at Delray Beach, forcing the second set to a tiebreaker.

“He tried to be a bit more aggressive (in the second set),” Raonic said of the 20-y ear-old Cornic. “I got the early break, (then) had a lopsided game, two doubles, couple of mistakes that I would be disappointed with normally. If I can get myself ahead a break, it’s where my strengths lie, so I’m happy I managed to keep it together and managed to pull it out in two (sets).”

Sock, the top-ranked American at No. 21 in the world, defeated Spaniard Guillermo Garcia-Lopez 6-4, 6-1 in a match that originally was scheduled to begin at 12:30 p.m., but did not begin until 9:04 p.m. on the Stadium Court. Sock said he dealt with the more than 8-hour delay by shooting some layups and keeping loose on the basketball court in the player’s lounge.

“I think everyone on Tour has dealt with it numerous times,” Sock said of the weather-related delay. “Everyone has their own routines. I just kept it light, just staying relaxed, moving around a lot to get the blood flowing.”

Despite the later-than-expected start, Sock said he was satisfied with his game against world No. 99 Garcia-Lopez, whom he also beat in straight sets in their only previous meeting at the 2013 French Open.

“I felt like I executed what I was trying to do pretty well and was able to get through in straights,” said Sock, who will take a 9-1 match record into the quarterfinals on Friday. “I felt good out there. It’s definitely nice to get this one under the belt and have a full day (off) tomorrow to hit some balls and recharge.”
Sock’s opponent in the quarterfinals will be Johnson, who was Sock’s doubles partner last summer when the two Americans teamed up to take the bronze medal at the Rio Games. Johnson, a 2014 semifinalist at Delray Beach, ousted Yoshihito Nishioka of Japan 6-4, 6-1 on Court 1 only a few minutes before Sock also penciled his name into the quarterfinal bracket. 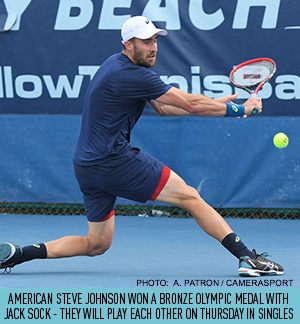 affects everybody differently,” Johnson said of the delay of his match, which was also moved from the afternoon. “You get here to play at 2:30, it’s tough to get the engines going, but I got fired up as much as possible. (The tournament officials) made it happen. They made a great effort, and I’m glad we came out here and played. Now I get (Thursday) off, clean up the game and get ready for Friday.”

The 27-year-old Johnson, who is the third-ranked American at No. 26 behind Sock and John Isner, also was a quarterfinalist last week at Memphis.

“I still feel like I haven’t played my best tennis yet this year,” Johnson said. “So I’m just kind of excited to keep building and keep trying to get better and better every tournament.”

Edmund, who arrived here with a No. 49 world ranking, needed three sets to defeat Yen-Hsun Lu of Chinese Taipei 6-3, 3-6, 6-2 in their first Tour-level meeting. The 22-year-old Brit now draws Raonic in the quarterfinals.

The only match that concluded before the rain began Wednesday was in the doubles bracket, where American Brian Baker teamed with Nikola Mektic of Croatia to defeat Radu Albot and Damir Dzumhur 6-1, 6-4. The top-seeded Bryan brothers had their first doubles match of the tournament moved from Wednesday to Thursday at 6 p.m.