SAVE THE DATE FOR DELRAY BEACH OPEN 2023 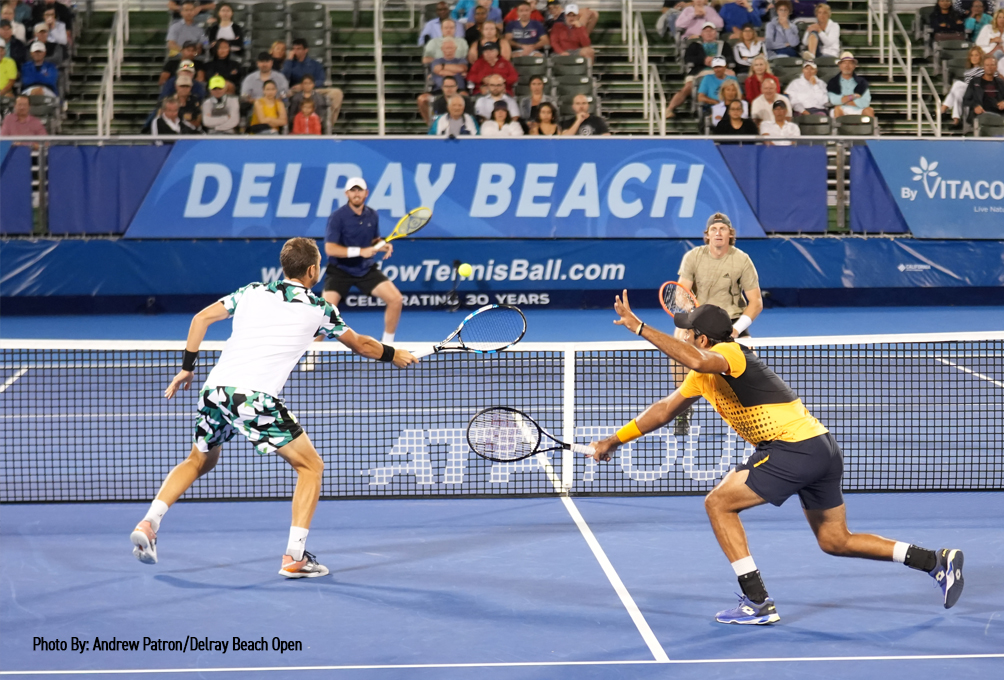 2023 Tournament to Celebrate 25 Years in Delray Beach; New Opportunity to Secure Series Tickets With Deposit Only

See more tennis stars at the 2023 Delray Beach Open (https://yellowtennisball.com/) next Feb. 10-19. It will mark the tournament’s 25th year in Delray Beach, where it has become a can’t-miss event on the jam-packed South Florida events season calendar, including Palm Beach County’s “Ultimate Week of Sports,” the South Beach Wine & Food Festival and the Miami Open.

The 10-day combined event will begin with an ATP Champions Tour team event opening weekend Feb. 10-12 featuring a field of the game’s legends. Singles and doubles main draw action for the ATP 250 event starts Monday, Feb. 13 and concludes with the ATP 250 finals on Sunday, Feb. 19.

Norrie’s success at Wimbledon comes after a strong finish to 2021, winning the ATP Tour Master’s 1000 event in Indian Wells, Calif., and qualifying for the year-end tour championships. He continued his success into the new year with his title run at Delray Beach in February and cracking into the world’s top 10-ranked player in April.

The 2022 Delray Beach Open doubles titlists Marcelo Arevalo and Jean-Julien Rojer have also seen more success this year. They went on to capture their first Grand Slam title together at Roland Garros in May, where Arevalo of El Salvador became the first player from Central America to win a Grand Slam title and Rojer, at age 40, became the oldest Grand Slam men’s doubles champion in the Open Era.

“The Delray Beach Open is a great place for tennis fans to see some of their favorite players in an intimate setting, and it’s a party that everybody will enjoy,” said tournament director Mark Baron. “We are looking forward to celebrating 25 years in Delray Beach at the downtown tennis center, where the whole area has become part of this great tournament.”

New this year to make it easier for fans who want to become weeklong series ticket holders: Packages can now be secured for a $100 deposit. A variety of series packages are available, including courtside box seats, on-court “Best Seats in the House,” covered Veranda seats and reserved seats. Weeklong series packages start at $749 and include parking and exclusive amenities, making them one of the best deals for local events. Tickets can be shared with clients and family throughout the week.

The tournament has been both a launching pad for stardom and a place for the game’s elite to raise the trophy. Recent Delray Beach champions include former US Open winners Marin Cilic and Juan Martin del Potro, Grand Slam finalists Kei Nishikori and Kevin Anderson, Americans Sam Querrey, Jack Sock and Frances Tiafoe, and hometown hero Reilly Opelka. Other competitors over the previous 30 years of the ATP 250 event include a roster of Hall of Famers and fan-favorites with Andre Agassi, Andy Roddick, Lleyton Hewitt, Tommy Haas, Patrick Rafter, Jim Courier, Michael Chang, the Bryan Brothers, the Woodies, Ivan Lendl, Mats Wilander and Jimmy Connors being among the most notable.

The Delray Beach Open will be celebrating its 31st overall event in 2023. The Delray Beach stop on the global ATP Tour annually plays in front of over 60,000 fans in addition to reaching television audiences in over 50 countries over the course of 10 days.