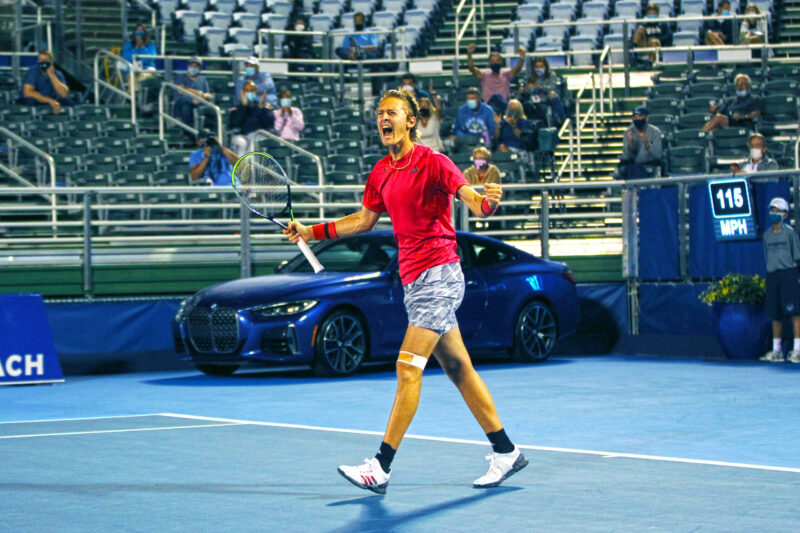 DELRAY BEACH, Fla. (Jan. 5, 2022) – Sebastian Korda, a 21-year-old American who reached last year’s final, will return to the 2022 Delray Beach Open by VITACOST.com, the ATP 250 tournament that will be held Feb. 11-20 in the three-time National Civic League All-America city.

Korda will be making his second tournament appearance after finishing as runner-up last year in what was just his fifth Tour-level event.

The 30th anniversary of the Delray Beach Open by VITACOST.com will also include former champions Reilly Opelka and Frances Tiafoe along with current World No. 12 Cameron Norrie and six-time ATP Tour titleholder Nick Kyrgios.

Tickets are available at YellowTennisBall.com and at the on-site box office (561-330-6000, 30 NW 1st Ave., Delray Beach FL 33444). Seating options range from on-court “Best Seats in the House” and covered Veranda seating to reserved seats and courtside box seats, all with backs and arm rests.

In his Delray Beach Open by VITACOST.com debut, Korda defeated two top five seeds to reach his first ATP Tour final. After capturing the ATP Challenger Tour title in Quimper just two weeks after his run in Delray Beach, Korda advanced to the quarterfinals at the ATP Masters 1000 in Miami last March.

Korda continued his success after Delray Beach when he did not drop a set en route to his first career ATP Tour singles title in Parma last May. Korda and his father, Petr, a former Australian Open champion and two-time Delray Beach Open competitor, are the third father-son duo to win ATP Tour titles.

The 21-year-old also matched his career-best finish at a Major when he advanced to the Round of 16 at Wimbledon last July. In his first full season on the ATP Tour, Korda earned 31 wins to obtain a career-high ranking of No. 38 capped off by a runner-up finish at the Next Gen ATP Finals.

In addition to his father’s success on the ATP Tour, other members of Korda’s family have had tremendous athletic achievements. His mother, Regina Rajchrtova, held a career-high ranking of No. 26 on the WTA Tour while Korda’s older sisters, Jessica and Nelly, are both Australian Open champions on the LPGA Tour. Nelly also won the 2021 Women’s PGA Championship and a gold medal in the Summer Olympics in Tokyo.

Opening weekend in Delray Beach, Feb. 11-13 will include ATP Champions Tour legends match-ups followed by the first-ever Delray Beach Open mixed doubles match featuring 2021 US Open finalist Leylah Fernandez and her sister Bianca along with the 10-time ATP Tour No. 1 team Bob and Mike Bryan. Leylah Fernandez teams with Bob Bryan while Bianca Fernandez pairs with Mike Bryan for the match. The Fernandez sisters and the Bryan Brothers are two of four sets of siblings competing on opening weekend.

Celebrating its 30th anniversary in 2022, the Delray Beach stop on the global ATP Tour annually plays in front of over 60,000 fans and a television audience in more than 50 countries. On-site it’s 10 days of themed parties, live music and art, the wine and champagne lounge, The Craft bar, courtside tables & bottle service, on-court and covered seating and so much more at the Delray Beach Tennis Center, the winner of the USTA’s 2021 Outstanding Tennis Facility award.