What the tournament and fans got, however, is the most anticipated semifinal in Delray Beach Open history.

Del Potro’s 7-5, 7-5 victory in the nightcap completed the bracket for Saturday’s semifinals where he will meet top-seeded and World No. 4-ranked Milos Raonic of Canada in the nightcap on the Stadium Court. The other semifinal will be an all-American afternoon showdown between No. 3 seed Jack Sock and Donald Young.

Raonic rallied from a set down to defeat No. 8 seed Brit Kyle Edmund 4-6, 6-3, 6-4 in the early evening match after Sock ousted fellow American Steve Johnson 6-4, 7-6(4) in the afternoon session.

Querrey, who defeated del Potro here in last year’s semifinals en route to winning his eighth and most recent ATP World Tour title, delivered 16 aces, but del Potro was able to break Querrey in the 11th game of each set that propelled him to the win.

“It was a quality match,” Querrey said. “Five-all in the first set I double-faulted twice in that game. Both times he broke me it was a lack of first serves from me. The first (set) two doubles and the second one he had two pretty good passing shots. He played really well.”

Del Potro said he knew that he had to be patient against the big serve of Querrey and wait for the door to open for him.

“He was serving love-30 many times and then he comes back with three or four aces in a row,” de Potro lamented. “Sometimes you can get frustrated in that situation, but I know this could happen against him. I was calm all the time and waiting for my chance, and both chances came at the end of the sets.”

As is often the case when del Potro plays here, there was a somewhat raucous atmosphere among the Argentine fans, but Querrey said he has become accustomed to it.

“I wasn’t rattled. It’s like a little fiesta every time,” Querrey said of the del Potro fans. “He’s been out of the game for a long time and comes back, so I get that the fans are excited. They haven’t got to see him in a while.”

As for his semifinal opponent, del Potro said he believes he’s again the underdog, as he thought he was against Querrey. 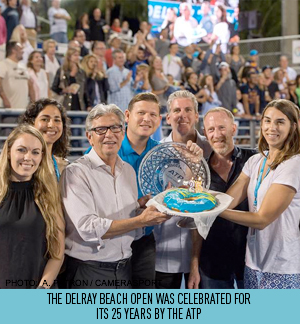 “It will be a big challenge,” del Potro said. “He’s the favorite and he’s playing so good. I’m just starting the season and I’ve made the semifinals already. Of course I’d like to keep going, but I’ll be going against one of the best players in the world.”

Early in the evening, however, there was a buzz that perhaps Raonic was in danger of being eliminated by Edmund. Raonic, however, dispelled that notion after losing the first set of his three matches this week.

“I was a little bit slow off the get-go,” Raonic said. “I think I got a little down on myself. I wasn’t necessarily focused on the right things, and I’m glad I was able to get out of that scenario halfway through the second. He made it difficult for me. It’s not like I went out there and just dropped a set. He stepped up, he played well.”

The 22-year-old Edmund, ranked No. 49 in the world, was seeking his first ATP World Tour semifinal appearance since last October in Antwerp. Raonic said he sees a bright future for the Brit.

“He takes the match to you,” Raonic said of Edmund. “He has a forehand that’s really hard to read and he can be very aggressive with it. He can dictate with it. He can make your eyes uncomfortable with it. He’s constantly improving.”

Raonic said that as the match wore on, Edmund gave him some openings and the key was that the Canadian made the most of the opportunities.

“The way I finished the match was better than the last two matches,” Raonic said. “I feel comfortable, I feel positive and I feel like I’ve got a good shot to win matches that are ahead of me.”