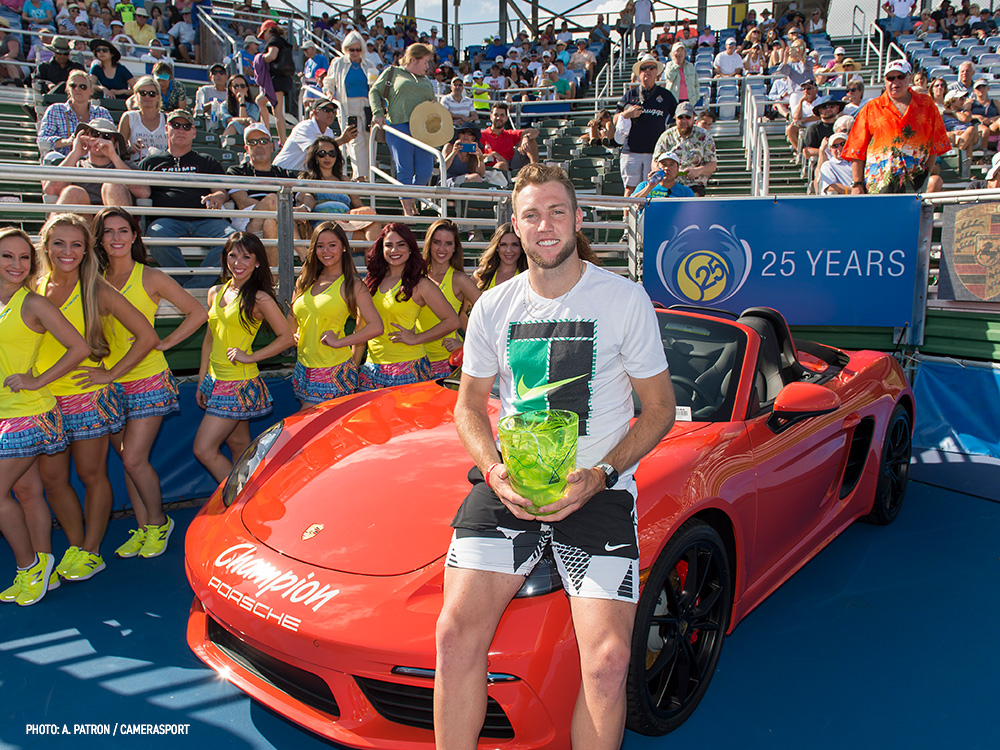 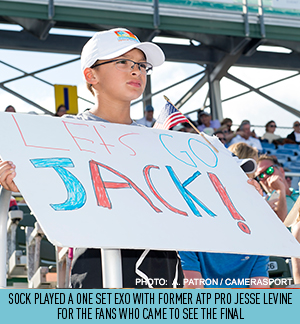 Sock picked up the winner’s check of $90,605 and the 250 ATP points that come with it without having to deliver a serve or break a sweat on the Stadium Court at the Delray Beach Tennis Center when his opponent, World No. 4 Milos Raonic, was forced to withdraw from the championship match because of a leg injury, handing the title to Sock in a walkover.

Raonic, the top seed here, said the injury is to his hamstring in his right leg, which the Canadian said occurred Saturday night during his 6-3, 7-6(6) win against Juan Martin del Potro. Raonic said he felt his hip tighten up a bit after running for a drop shot from del Potro early in the second set.

“Last night (after the del Potro match), I started feeling a sharp pain in my right leg in the hamstring,” Raonic said. “I was like, ‘OK, I’ll get some sleep, it’ll pass by.”

But Raonic said that when he woke up Sunday morning, it was painful to walk, and he immediately informed his medical team.

“We did about two hours of therapy trying to sort of calm it down, and when we realized it wasn’t making much progress other than muscle relaxing a bit, we sort of came to the conclusion that it was a slight tear of the hamstring.”

Raonic said that he will need more imagery testing on the injury before he knows the full extent of it and how much time he will have to take off from the ATP World Tour. He was scheduled to next play at Acapulco this coming week, but has pulled out of that tournament.

“It’s disappointing in a lot of ways,” said Raonic, who was making his first appearance at Delray Beach. “It’s been three tournaments in a row that I’ve played this year that I’ve sustained some kind of muscle damage after each one. And obviously it’s disappointing in the sole fact that you’re one match away from a title at a tournament. Not being able to compete and go out there, that’s not easy to accept.”

Despite sustaining other leg injuries over the past year, Raonic never before has had to pull out of a final.

“That makes it a little bit more painful,” Raonic said.

Sock, who will move up to No. 18 in the ATP World Tour rankings on Monday, leaves here with his second Tour title this year having not lost a set all week, but he would have preferred to have hoisted the championship trophy after having won it on the court.

“We always have good battles, so I was definitely looking forward to it and was excited to play,” said Sock, who had beaten Raonic only twice in their previous 10 meetings. “On the flip side of that, a title is a title. Obviously, I’d probably be a little more excited and full of energy if I’d gone out and done it on the court.”

Sock said that he obviously was surprised when Raonic approached him on Court 1 next to the Stadium Court just as Sock was about to warm up with his coach and informed him of the situation.

“It’s very unfortunate for him, and hopefully he can have a speedy recovery,” Sock said of Raonic.

Following the trophy presentation on the Stadium Court, Sock played a one-set exhibition against former ATP pro Jesse Levine, who lives in nearby Boca Raton and also was a last-minute substitution last Sunday in the ATP Champions Tour event. Afterward, Sock said he planned to head north up the Florida Turnpike to Palm Beach Gardens to watch his friend Rickie Fowler try to win the PGA’s Honda Classic golf tournament. Fowler entered Sunday’s final round with a four-shot lead.

“If he’s able to take the title there, then I’m sure we’ll meet up tonight and have a congratulatory water,” Sock said jokingly. “I play on Tuesday (in Acapulco), so I won’t partake (a stronger drink).”

Tournament director Mark Baron said that having a draw with international players such as Raonic and del Potro in one bracket and Americans such as Sock and Steve Johnson in the other was an ideal situation the way it worked out most of the week before what transpired with Raonic on Sunday.

“What can you say?” Baron said. “I don’t think that many tournaments in the world over the last 25 years that I’ve been doing this have had finals not happen. Maybe five, six? Milos handled it great. He agreed to do the trophy presentation, the press, sign autographs. We expect him back here next year. I think he’ll be back here for years.”

Raonic hinted that he indeed hopes to return to Delray Beach next year.

“I had a great experience,” he said. “It was a very pleasurable experience.”

Baron said that fans who had tickets to Sunday’s finals should check the tournament’s web site (yellowtennisball.com) at 4:30 p.m. Tuesday for information regarding refunds.

“We are going to do more than you can imagine for our spectators,” Baron said.