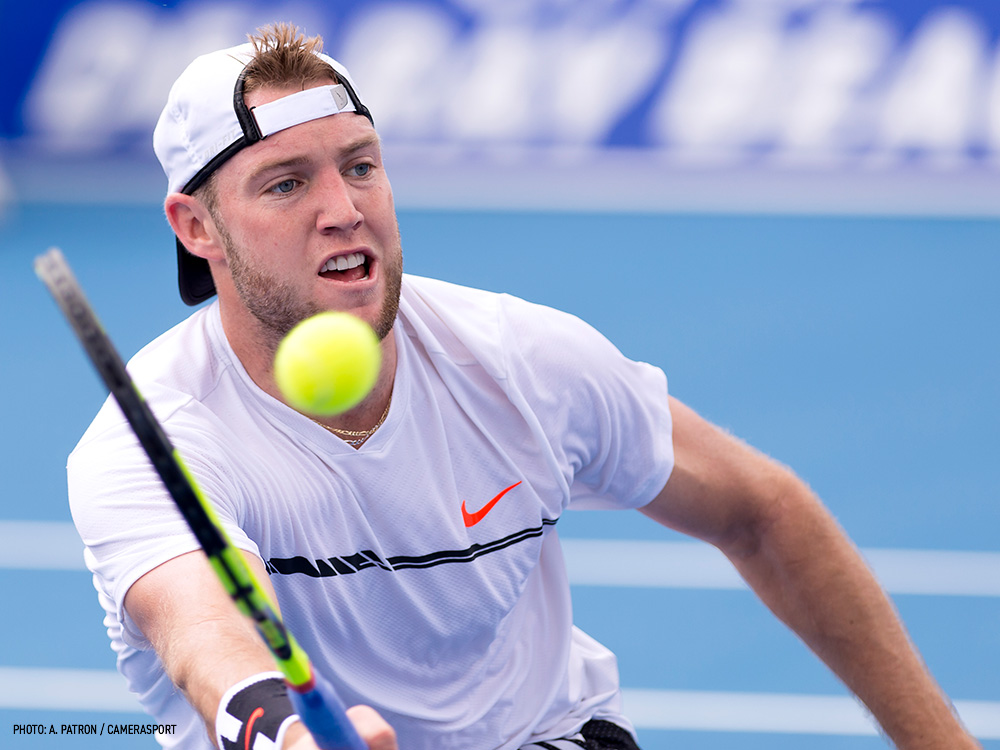 The 24-year-old top-ranked American (world No. 21) and No. 3 seed here bested fellow American and No. 5 seed Steve Johnson 6-4, 7-6(4) in the day’s first quarterfinal match at the Delray Beach Stadium and Tennis Center.

The victory secures Sock a spot in Saturday’s semifinals where he will face Donald Young in another all-American matchup. Young received an unexpected pass into the semifinals on Thursday when Belgian qualifier Steve Darcis withdrew from the tournament for personal reasons following his quarterfinal win.

Sock’s straight-sets win on a sun-drenched 80-degree afternoon Friday on the Stadium Court improves his match record in 2017 to 10-1. It also improves his record to 4-1 lifetime against Johnson, whom he teamed with to earn the bronze medal at the Rio Olympics. Sock also prevailed in straight sets against Johnson last month at Auckland en route to his second ATP World Tour singles title.

Both players struggled some with their serves in the first set, with Sock breaking Johnson three times and Johnson breaking Sock twice. 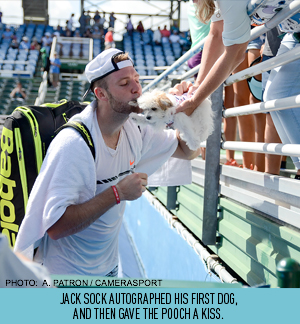 “I thought the first set today was very different than our usual matches,” Sock said. “It usually comes down to a break here and a break there. Our first set today, I was able to get the early break (in the first game), give it back, get it again, give it back and then get it a third time. I feel like both our strengths is serving and being aggressive, so for us to break five times in a set was very different. I’m glad I was on the winning side of that.”

Johnson was equally miffed at the unusual amount of breaks in the first set.

“I’ve never lost a set like that,” the world No. 26 Johnson said. “It’s always one or two points here and there that could have changed the outcome, and unfortunately I didn’t capitalize.”

Sock, who registered seven aces and only one double fault, benefitted from six double faults by Johnson, who said he believes that Sock is “managing his game” better.

“He’s still got one of the better forehands in tennis,” Johnson said of Sock. “He’s athletic, he’s creative, he wins a lot of intangible points, and that’s what it comes down to sometimes.”

As Sock was leaving the court following his win, he stopped to sign tennis balls and take a few selfies with some young fans when a woman leaned over the railing with her small dog and asked Sock to sign the canine’s collar. Sock obliged.

“That was definitely a first,” Sock said of the unusual autograph request when asked about it in the post-match press conference. “But the dog was really cute, so I was happy to do it. I like dogs.”

Then it was on to the more serious matter of facing Young, whom Sock has beaten each of their two previous meetings, the last being last year in straight sets at the ATP World Tour Masters 1000 Canada. Young needed to take a medical timeout to have a trainer tend to a sore knee during the first set of his three-set win against Taylor Fritz on Thursday, but he will have had a full day off to nurse that injury prior to Saturday’s semifinal match against Sock.

“He may come out with a completely different game plan than in the past,” Sock said of Young. “It’ll be interesting to see what he does.”

The only other action Friday afternoon produced an upset in the doubles bracket, as Yen-Hsun Lu of Chinese Taipei and 43-year-old Leander Paes of India ousted the No. 1 seed and world No. 3 Bryan brothers (Bob and Mike) in a three-set tiebreaker 7-6(4), 2-6, 10-7.

The Bryan brothers were bidding for their record fifth Delray Beach Open title. Paes has won 55 titles during his career. He and Lu next face No. 3 seed Treat Huey and Max Mirnyi at 6 p.m. Saturday. The other doubles semifinal will match Jonathan Erlich and Scott Lipsky against No. 2 seed Raven Klaasen and Rajeev Ram in the first match of the day at 1 p.m. Ram was the singles runner-up here last year.