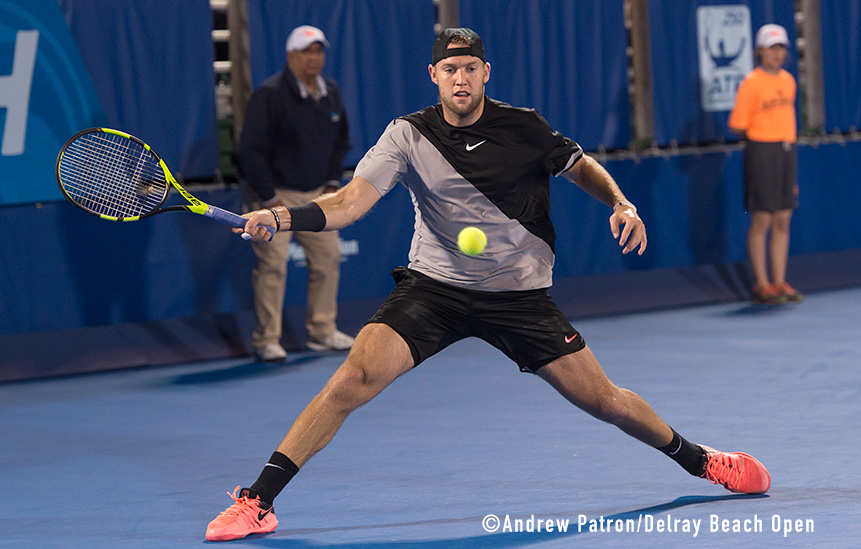 The world No. 8-ranked Sock’s 6-4, 6-4 win against qualifier John-Patrick Smith of Australia was the American’s first win this season after exiting in his opening matches at the Australian Open and Auckland.

Gusty, swirling winds at the Stadium court at the Delray Beach Tennis and an upset-minded Smith made Sock earn his first-round match in his return here as the defending champion for the first time.

“It seems like when (the wind) gets in the stadium, especially at night, it swirls more. It’s tricky conditions and he’s a tricky guy,” Sock said of Smith, who is ranked No. 225 in the world. “He’s a lefty, serves and volleys a lot, (has) some very unorthodox shots, some flat, some spin, some flat slice, kind of rushes the net a lot.”

Despite those challenging factors, Sock was able to battle through and advance to the second round in his quest for back-to-back titles here, a feat that has not been accomplished since Aussie Jason Stoltenberg hoisted the championship trophy in 1996 and ’97.

Sock was just relieved to have been able to walk away a winner Monday night.

“Tricky conditions, tricky player, so I’m happy to get through,” said Sock, who next faces the winner of Tuesday’s first-round match between Americans Ryan Harrison and wild card Reilly Opelka.

The evening’s only other match was a three-set affair won by wild card American Frances Tiafoe, who sent Aussie Matthew Ebden to an early exit, 6-2, 2-6, 6-2. That made it an American trifecta sweep in Monday’s singles matches, as Donald Young also advanced to the second round earlier in the day.

There’s a full card of 14 matches on deck for Tuesday beginning at 11 a.m. and concluding with a nightcap match between No. 2 seed and world No. 10 Juan Martin del Potro of Argentina against Frenchman Jeremy Chardy. That match will be preceded by an all-American showdown featuring No. 4 seed and world No. 12 Sam Querrey against Taylor Fritz at 6 p.m. The day session is being billed as Canada Day, with back-to-back matches in the afternoon featuring Canadians Milos Raonic (against Japan’s Taro Daniel) and Denis Shapovalov (against Croatian Ivo Karlovic). Another Canadian, Peter Polansky, also will be in action on Court 1.