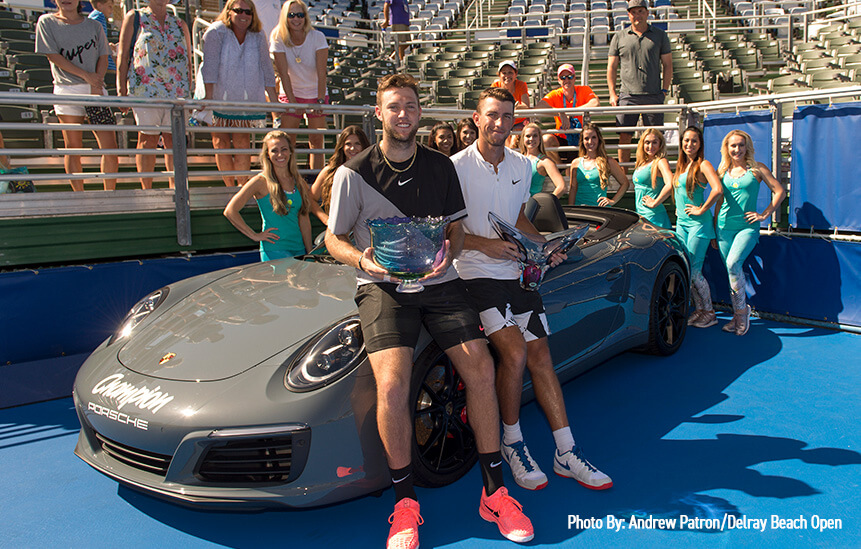 DELRAY BEACH, Fla. – The painful disappointment of falling short in his quest to defend his singles title here this week was soothed Sunday for Jack Sock when he became the third player in Delray Beach Open history to win three combined titles in singles and doubles.

What made the day even more special for Sock was that he accomplished the feat while teaming with his close friend Jackson Withrow to defeat Nicholas Monroe and John-Patrick Smith 4-6, 6-4, 10-8 in the doubles final. It’s the first ATP World Tour title for Withrow.

“It’s not so much about the tennis, it’s more about our friendship. That’s what works for us,” Withrow said.

Sock and Withrow are now 4-3 as a team. They captured the title Sunday playing in their first final together after storming through the doubles draw that included wins against three of the four seeded teams here this week. Among their victims this week were the top-seeded Bryan brothers.

“Obviously the Bryans are the greatest team to ever play and I think forever will be, so any time you get a win against those guys it’s fun, it’s special, “ said Sock, who also won the doubles title here five years ago with James Blake as his partner. “That was a great win for us, probably a big confidence boost (for Withrow’s) first time playing them. I think I lost to them in 38 minutes when I played them the first time. Once we get a first match or two under out belts the confidence just keeps going. If we’re just having a good time out there I think we can beat anybody.”

Sock said that hoisting the championship trophy Sunday further solidified his reason for entering doubles at some tournaments because it can take the sting out of an early exit in singles and also gives him more time on the court.

“It’s a long year. I’m not going to stress too much about (losing in singles),” said Sock, who three years ago had a career-best No. 6 doubles ranking in the world.  “I play doubles for fun. Singles has always been my goal. People are going to call me a doubles specialist after today.”

Sock also continued his “King of the Beach” streak that has seen him win seven titles in Delray Beach dating back to 2005. The Kansas City resident has won four junior titles, two Delray Beach Open doubles titles and the 2017 singles title over the last 13 years.

Withrow said that his singles career is “non-existent” these days and also said that the win against the Bryan brothers was a memorable one.

“As a doubles specialist myself, you look up to them and try to figure out ways to improve like they do,” Withrow said of Bob and Mike Bryan. “It was pretty special for me to one, be on the court with them, and two, to have the respect enough to go toe to toe with them and get the victory over them for the first time. They bring a certain excitement to any tournament.”

And that makes the championship trophy Withrow collected Sunday with his buddy also a special memory.