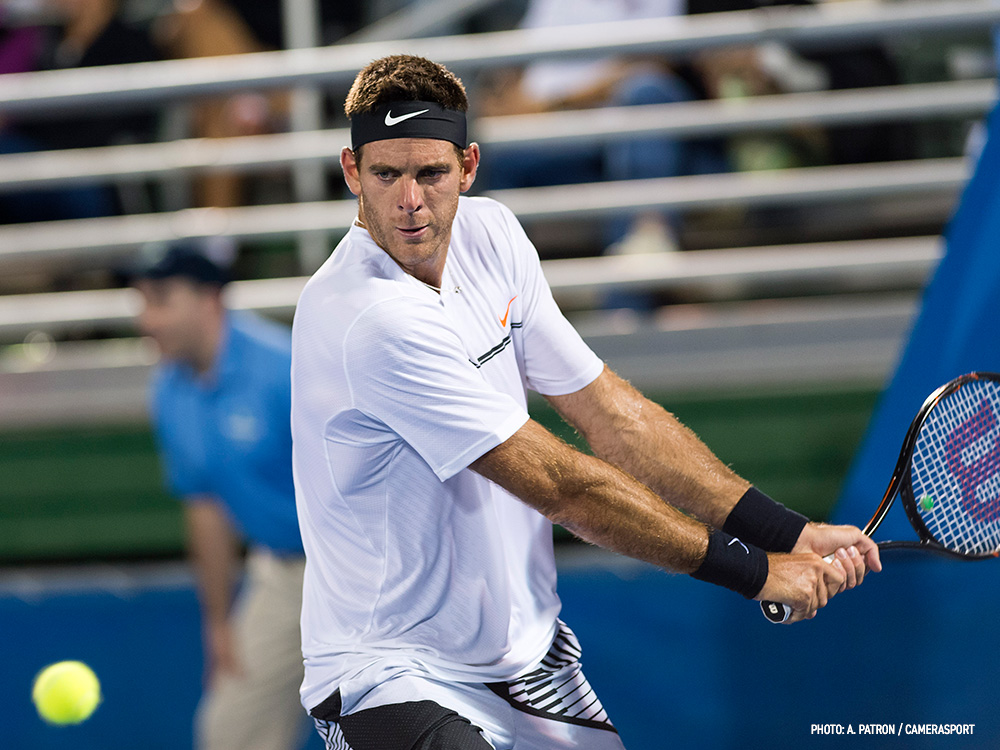 A “pre-sale” will enable fans the first chance to buy tickets during a two-week window that coincides with the upcoming US Open. The pre-sale will include Delray Beach’s three premier opening-round matches.

Tournament director Mark Baron is pleased to have all five players locked up early in the event’s planning process. “This is historic for us,” said Baron. “We have never signed, sealed and delivered a group like this by mid-August.”

The three ATP World Tour singles stars figured prominently in the 2017 Delray Beach Open. The top-seeded Raonic and top American Sock reached the final, and Raonic and del Potro squared off in the semifinals.

After withdrawing from the final with an injury, Raonic told fans that he would return to Delray Beach, and he has not disappointed.

“I had a great time at the tournament,” he said. “The staff, the volunteers, the crowd, and the tournament director were all phenomenal toward me. It was a very pleasurable experience, one that I hope I can live through again.”

Series packages for all 17 sessions are also available during the special “first-chance” pre-sale. Courtside Box Series packages are $1,700 for two seats or $2,750 for four, while the on-court Best Seats in the House and covered Stadium Veranda packages are up to 60 percent off regular prices. Best Seats are discounted to $3,000 for two seats or $4,500 for four, and Stadium Veranda seats are $3,500 and $5,000, respectively.

The two-time ATP World Tour “Comeback Player of the Year” has dealt with wrist injuries in recent years; 18 months ago he slipped to a ranking of No. 1,045 but a comeback that began in Delray Beach in 2016 has lifted him back into the world’s Top 30.

The Argentine also opened his 2017 season in Delray Beach, reaching his second straight semifinal in the “Village by the Sea.” Figuring in his 2011 title, he sports an 11-2 mark on the Delray courts.

When then-world No. 4 Raonic played his first-round match in Delray Beach in February, he became the highest-ranked player in tournament history. In 2017 he has also reached the Istanbul final, and was a quarterfinalist at both Wimbledon and the Australian Open.

His best year-end ranking (No. 3) came in 2016 after reaching the Wimbledon final, the Australian Open semifinal and winning the Brisbane title — the eighth ATP World Tour title of his career.

Sock, a Kansas City resident currently ranked world No. 18, has been on a steady climb since 2016.

The 24-year-old is 28-14 this year, highlighted by two ATP titles, his first Master Series 1000 semifinal at Indian Wells, and his fourth Master Series quarterfinal at Miami. Sock’s ATP World Tour title in Delray Beach was the third of his career.

Along the way Sock has recorded a pair of Top 10 wins over world No. 5 Kei Nishikori and Raonic. Sock also won the 2014 Wimbledon doubles title, and won gold in mixed doubles and bronze in doubles at the 2016 Rio Olympics.

The Bryan Brothers have reached a record six finals in their 10 Delray Beach appearances. The pair share 113 ATP World Tour doubles titles, 16 Grand Slam titles, a 24-5 US Davis Cup record that includes the 2007 title, and an Olympic gold medal in London (2012) and bronze in Beijing (2008).