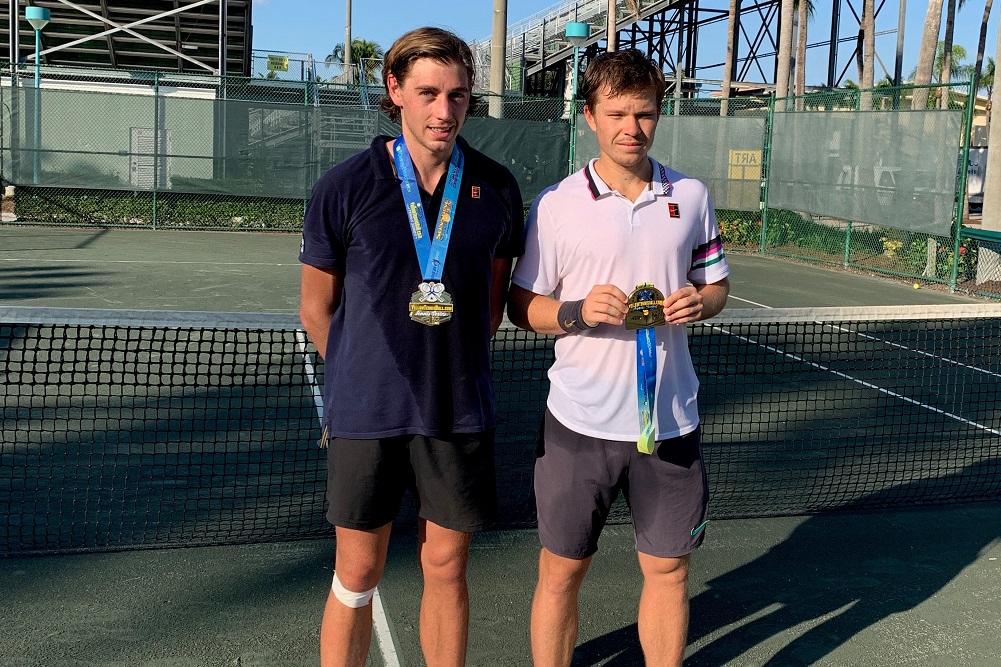 NOVEMBER 19, 2019, DELRAY BEACH, FL — Stefan Kozlov, who reached No. 115 in the world before injuries set him back, rarely finds himself rattled by an opponent. But even he got flustered at Tuesday’s final of the Delray Beach Open Wildcard Survivor tournament at the Delray Beach Tennis Center.

Kozlov, who lives in Delray, had to keep his cool while beating Lucas Renard, 6-2, 6-0, as his opponent slowed the match down several times, yelling at Kozlov and arguing calls. At one point, Kozlov turned to his supporters in the crowd and told them Renard was “getting in my head.” Still, he remained focused and picked up the easy win, securing a berth in the Delray Beach Open qualifier in February.

“I’ve played a lot of tennis, and I don’t think I’ve ever experienced something like that,” said Kozlov, a 21-year-old of Russian descent who grew up in Pembroke Pines. “It was very awkward, very rude (of Renard). I don’t really want to talk about it. Just congratulate him on a good tournament.”

Renard’s antics — which included a heated exchange with Kozlov over an out-call — also surprised one of Kozlov’s coaches, Brian Battistone, a former pro player who also lives in Delray Beach.

“It was pretty clear to (Renard) that he wasn’t going to match Stefan’s level of tennis,” Battistone said.

“He was trying some different head games to reverse the mom momentum. It wasn’t going to work.

“I was happy for Stefan, especially that second set where it could have gotten silly with some of the stuff going on. He stayed tough mentally and finished it off. You never want those things to creep in. It’s a fickle game.”

Despite the distractions, Kozlov was pleased to win the Survivor tournament. A few years ago, he was a rising standout; then a case of mononucleosis, coupled with back and elbow injuries, appeared to derail his career.

“I had a couple small injuries, lost confidence,” said Kozlov, who was encouraged by family and friends to stick with tennis. “I’m trying to get back to where I was and go further. This is a good opportunity to play in the Delray Beach Open.

“That’s how sports is — sometimes you get a little sidetracked and it’s tough to come back. It’s good to win (the Survivor) and get into the tournament, but it’s a whole different level there. Hopefully, I can win a couple matches at the (Delray Open qualifier).”

If Kozlov were able to win the qualifier, he’d earn a spot in the main draw at the ATP 250 event, also held at the Delray Beach Tennis Center. His father, Andrei Kozlov, believes his son can advance in February’s tournament

He has more confidence, he’s working harder,” said the elder Kozlov, who runs the Kozlov Tennis Academy in Pembroke Pines. “The last few days, he played great. I think he has potential (to make the main draw). Anything is possible.”