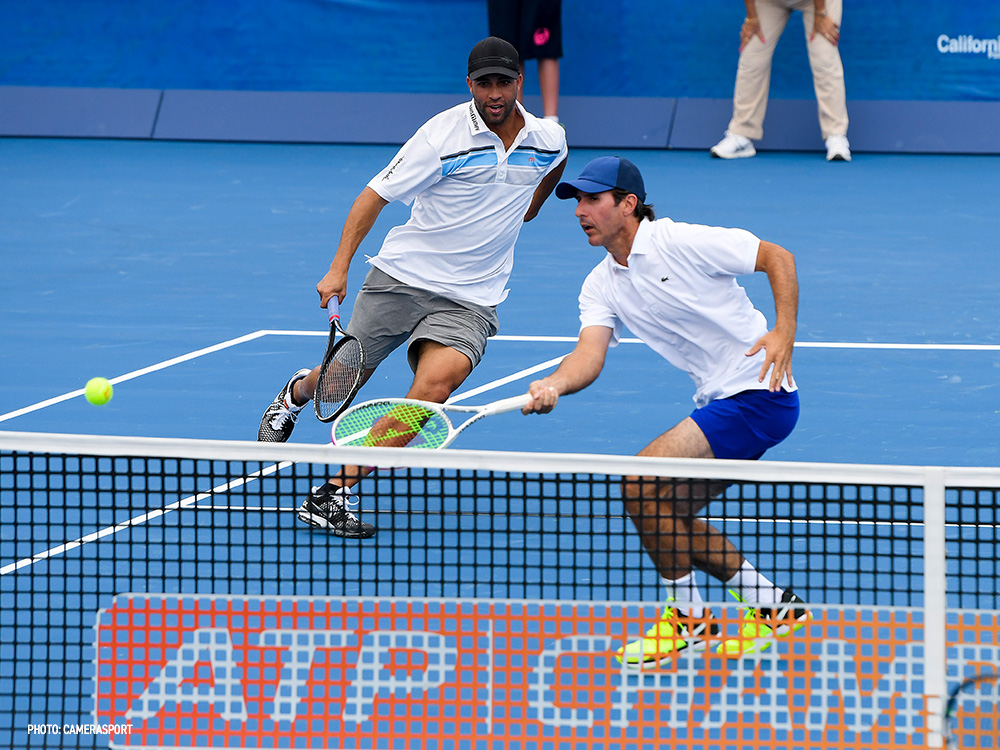 DELRAY BEACH, FLA. – His approach to the game is more casual and includes jovial banter both with his opponent across the net and fans in the stands. But make no mistake, Mardy Fish still loves to compete. And win, too.

Fish put the finishing touches on a successful day for Team USA, winning the nightcap against Frenchman Sebastian Grosjean 6-3, 7-6(7-5) Saturday night to clinch the title for the Americans in the ATP Champions Tour Delray Beach Cup competition against Team International at the Delray Beach Stadium and Tennis Center.

“It means everything. It means the whole tournament,” Fish said half-jokingly after his nearly 90-minute match against Grosjean that gives Team USA a 5-1 lead heading into the two final matches Sunday. “It’s not quite as serious as the regular tournaments, but it’s fun.”

The Champions Tour event here is the only one in the world played at the same site and time as an ATP Tour tournament. Fish, who attended high school at nearby Boca Raton Prep, won the Delray Beach Open in 2009 and was part of the winning Team USA last year here in his first year of retirement from the regular ATP Tour.

His win against Grosjean was Fish’s second match Saturday. Earlier in the day he lost to Fernando Gonzalez in a third-set tiebreaker and his shirt was soaking wet after his match against Grosjean, but winning the match and clinching the title for Team USA make it an exhausting but satisfying workout for Fish, who won two of his three matches this weekend.

“It’s been a long day, but it’s fun being out here and seeing familiar faces,” Fish said. “It’s a good workout. I don’t play much anymore, obviously, so it would be nice to just play one (match a day) and have it at a high level, but I still enjoy competing and competing with someone like Sebastien.”

During his afternoon match against Gonzalez, Fish stopped during the match and asked Gonzalez what his pulse rate was. Gonzalez answered, “175.” Fish’s response: “Well, mine’s 220. I might die.”

Against Grosjean, Fish lobbed a return that was clearly out, but challenged the call anyway. Grosjean shouted across the net to Fish, “You need some rest?” Fish smiled and said, “just kidding.”

“I have the day off (Sunday), so it’s all good,” Fish said after the match.

James Blake and Vince Spadea teamed up to give Team USA its first win of the second day of the Champions Tour event when they defeated Grosjean and Michael Pernfors 6-2, 3-6(11-9) in the only doubles match of the three-day format. Blake, a finalist at the Delray Beach Open in 2007 and ’08, also was a member along with Fish last year when the Americans beat Team International 6-3.

Spadea, who was ranked a career-high No. 20 in the world in 1999 and 2004, gave Team USA a commanding 4-1 lead when 1986 French Open finalist Pernfors, trailing Spadea 3-1 in the first set, was forced to retire because of a right calf injury. Pernfors, 53, lost to Fish on Friday night in straight sets.

The Champions Tour event concludes Sunday with two scheduled matches on the Stadium Court. Spadea will take on Gonzalez at 12:30 p.m., followed by the final match of the competition between Blake and Grosjean.

Regardless of the outcome of those two matches, the championship trophy will be handed to Fish and his American teammates.