Third time a charm for Kyrgios in Delray 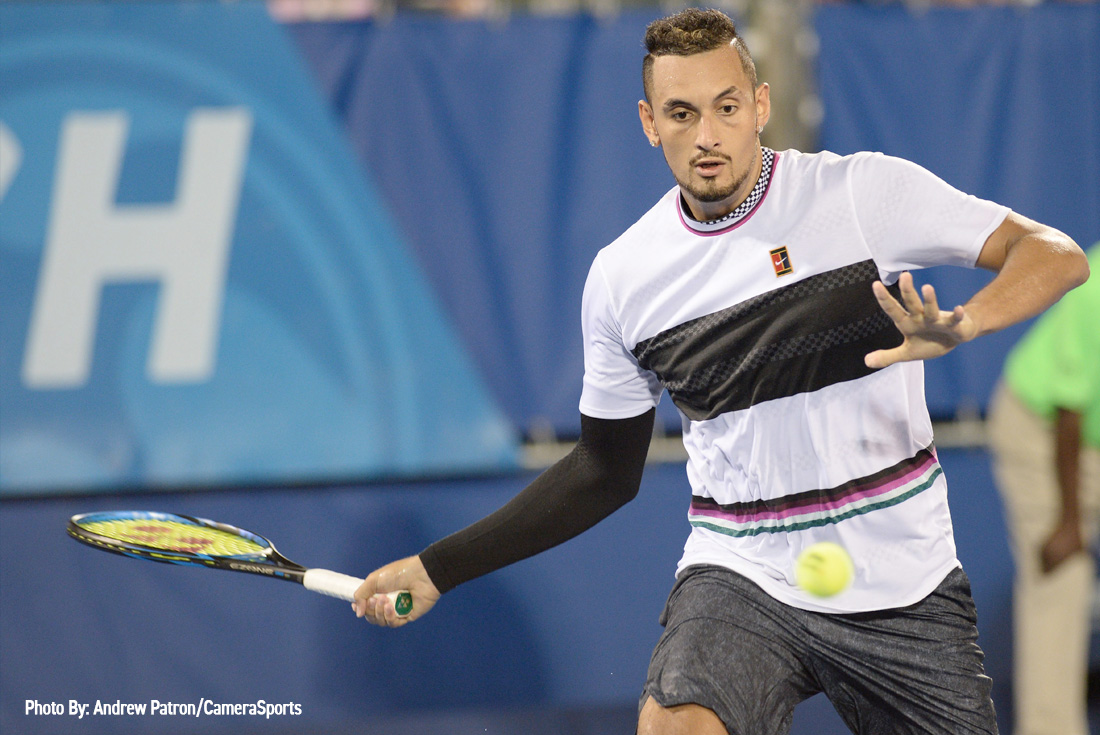 DELRAY BEACH, Fla. – The third time was a charm for Nick Kyrgios, who finally made his debut at the ATP Tour’s Delray Beach Open on Monday night after having to withdraw from the tournament each of the past two years because of injuries. Not this time though, as he delivered a thrilling three-set victory.

Kyrgios, ranked No. 64 in the world, used a strong serving game to outlast Aussie countryman John Millman 6-4, 6-7(1), 7-6(3) to cap off the first day of the weeklong tournament at the Delray Beach Stadium and Tennis Center. Millman arrived here ranked No. 37 in the world and was the No. 5 seed. He defeated Kyrgios at the U.S. Open in 2017 in their only other head-to-head ATP Tour meeting.

Kyrgios delivered 19 aces in the match – including nine in the decisive third set – to offset his 11 double faults in the back-and-forth match.

“My serve gets me out of trouble,” Kyrgios said. “I actually returned ok.”

Kyrgios said he expected an extremely competitive match and said he would have preferred to meet his Australian friend in the later rounds. It proved to be the most entertaining match of the first day.

“I knew today wasn’t going to be an easy opener,” Kyrgios said of drawing Millman in the first round. “He makes you work for everything. He’s an incredible competitor. I’ve always loved seeing his success. It’s unfortunate we met in first round.”

South African Lloyd Harris had a successful Delray Beach debut when the 21-year-old right-hander defeated qualifier Darian King of Barbados 7-6(1), 6-3 in the first match of the evening session. Harris is the No. 2-ranked South African behind Kevin Anderson and moved into the top 100 rankings for the first time at No. 98 just three weeks ago.

“It’s all pretty new, but I’m happy (with) my game,” Harris said. “I’ve been playing well and with a lot of confidence. The last six months, I’ve been playing, I’d say, my best tennis. . . . If I play good, I believe I can beat anyone.”

Lukas Lacko of Slovakia and Denis Istomin of Uzbekistan also advanced to the Round of 16 in the only other singles matches played Monday.

Tuesday’s card has a full lineup of 15 matches spread out over the day and night beginning at 11 a.m. EDT. Top-ranked American John Isner, who is the No. 2 seed here this week, highlights the afternoon session on the Stadium Court when he faces Canadian Peter Polansky. Defending champion Frances Tiafoe will open defense of his Delray Beach title against qualifier Daniel Evans in the first match of the evening session on the Stadium Court, followed by the nightcap with No. 1-ranked and world No. 4 Juan Martin del Potro taking on Nishioka.