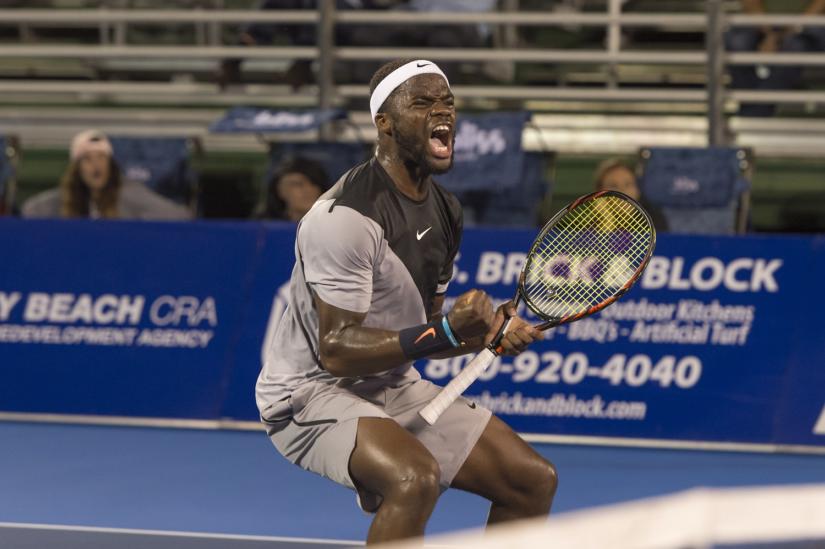 Swinging underway February 15-24, 2019, at the Delray Beach Stadium & Tennis Center, for the first time ever, a promotion on Delray Beach Open series packages (Best Seats in the House, Stadium Veranda Seating, Courtside Box Seats and budget-friendly Reserved Seats) is available August 15-28.  Fans who purchase a series package before August 28 will have access to the closest seats in the stadium before individual tickets go on sale and:

“We are excited to have Frances Tiafoe return to Delray Beach to defend his first ATP title and a top player like Nick Kyrgios committed to play here,” said Tournament Director, Mark Baron. “Our 2019 event is shaping up to be another exciting and entertaining year for fans to take advantage of seeing some of the youngest, and best, in the game.”

In 2018, Tiafoe had the most successful week of his young career when he captured his first ATP World Tour singles title at the Delray Beach Stadium and Tennis Center. Tiafoe was the first wild card winner at Delray Beach and is the youngest American to win an ATP title since 19-year-old Andy Roddick won in Houston in 2002. He is also the first Next-Gen American to win a title and the eighth player to capture his first ATP title at Delray Beach.

Nick Kyrgios, currently ranked 30 on the ATP World Tour, is no stranger to the local community as he trains in nearby Boca Raton. Kyrgios has four singles titles under his belt at the young age of 23-years-old including the 2018 Brisbane International. Kyrgios is known for his unique style, character and on-court flair for the dramatic.

“I am excited to make my debut in the Delray Beach Open, being there this year unable to play was really tough for me but I am so looking forward to playing in front of the great fans in Delray,” stated Nick Kyrgios. “It’s always been a little home away from home for me as I spend so much time in Boca and the local community really knows their tennis. It’s going to be a lot of fun.”

Kyrgios has reached the quarterfinals of the Australian Open and Wimbledon Championships, the semifinals twice at the Miami Masters 1000 and the finals of the Cincinnati Masters 1000.  Kyrgios also boasts impressive wins over world #1 players Roger Federer, Rafael Nadal, Novak Djokovic and Andy Murray.

A complete schedule of all Delray Beach Open match times and ticket opportunities is posted at YellowTennisBall.com. Tickets can be secured online or by calling 561-330-6000.

About The Delray Beach Open: The only tournament in the world featuring an ATP Champions Tour event and an ATP World Tour event in the same week at the same venue is held in Delray Beach, Florida, February 15-24 at the Delray Beach Stadium & Tennis Center. The ATP World Tour’s first North American hard court event of the outdoor season is one of just 10 ATP World Tour events in the United States. 2019 will be its 21st year in Delray Beach, and 27th overall. The 3-day, ATP Champions Tour team-event is in its 10th year and was the first-ever event played on US soil. Each year the Delray Beach Open brings world-class tennis players and thousands of visitors to Delray Beach and Palm Beach County. In 2010, the tournament received the Discover The Palm Beaches Florida’s annual Providencia Award for its extraordinary contribution to tourism. The City of Delray Beach was also a finalist for the USTA’s “Best Tennis Town” Award and in 2003, the tournament was the recipient of an “ATP Award of Excellence.” For more information please visit www.YellowTennisBall.com.

About the ATP: The ATP is the governing body of the men’s professional tennis circuits – the ATP World Tour, the ATP Challenger Tour and the ATP Champions Tour. With 64 tournaments in 31 countries, the ATP World Tour showcases the finest male athletes competing in the world’s most exciting venues. From Australia to Europe and the Americas to Asia, the stars of the 2017 ATP World Tour will battle for prestigious titles and Emirates ATP Ranking Points at ATP World Tour Masters 1000, 500 and 250 events, as well as Grand Slams (non ATP events). At the end of the season only the world’s top 8 qualified singles players and doubles teams will qualify to compete for the last title of the season at the ATP Finals. Held at The O2 in London, the event will officially crown the 2018 ATP World Tour No. 1 presented by Emirates. For more information, please visit www.ATPWorldTour.com.

About the ATP Champions Tour: The ATP Champions Tour brings together many of the greatest tennis players in history for nostalgic, competitive and entertaining tournaments around the world. Players are either formerly ranked No. 1 in the world in singles, a Grand Slam singles champion or finalist, or a singles player on a winning Davis Cup team. Players must be retired from ATP World Tour competition and each event can invite wild card entrants of its choice. The Delray Beach Open features a team-format for its 3-day ATP Champions Tour event.