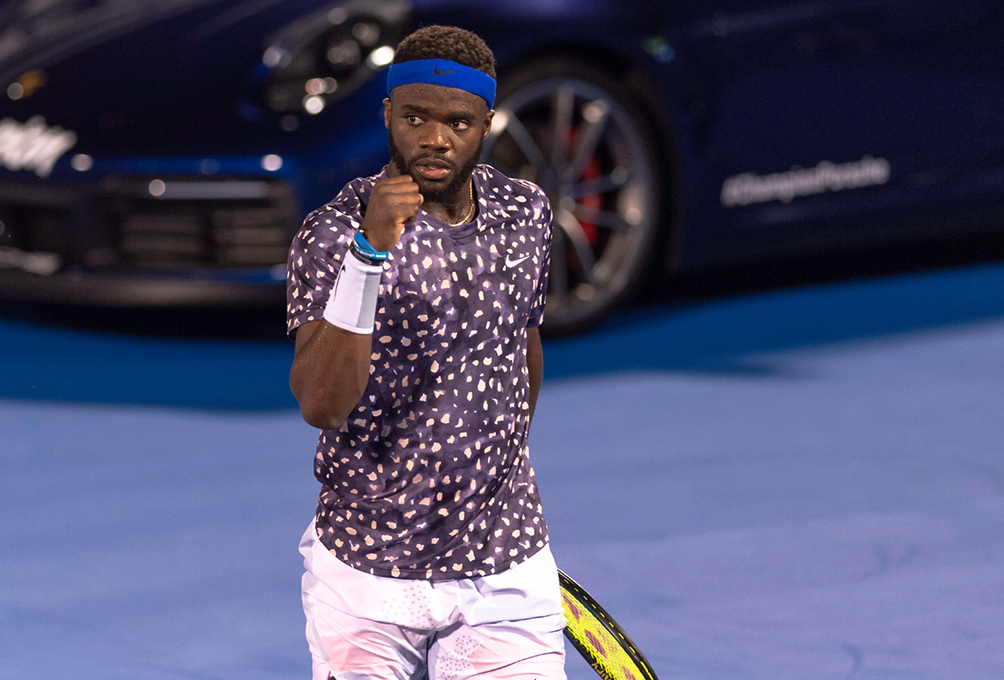 DELRAY BEACH, Fla. – Returning to the site of his first and only title as a pro on the ATP Tour was just what Frances Tiafoe needed to notch his first win of the year.

Tiafoe, who captured the Delray Beach Open title in 2018, won his first match of 2020 Monday night with a workmanlike 7-6(3), 6-2 victory against qualifier Emilio Gomez of Ecuador. Tiafoe’s win put the finishing touches on a perfect 4-0 day for Americans in first-round play at the Delray Beach Stadium and Tennis Center.

Tiafoe, who lives only about 10 minutes away in Boynton Beach, had lost in the first round of all three tournaments he’s entered this year, all outside the United States. Coming home might have been the remedy he needed to erase the zero on the left side of his record. His win against Gomez who was making his debut here, improved Tiafoe’s record to 6-1 at Delray Beach.

“I’m happy all the Americans won today,” Tiafoe said. “I just like coming back here. I’ve played great tennis here in the past, I love being here and hopefully I can go further.”

If he’s to repeat his feat of 2018 here, Tiafoe might have to dispatch No. 1 seed Nick Kyrgios of Australia in the second round. Kyrgios plays American Tommy Paul in the nightcap match Tuesday. Tiafoe said finally getting his first win of the year should help his confidence.

“It’s definitely been a slow start to the year for me, so a win like this for me is important, especially in straight sets,” said Tiafoe, whose ATP ranking has slipped to No. 84 after reaching a career-best No. 29 last February. “I had a little hiccup at 5-3 (in the first set), but other than that I thought I played pretty well tonight. I’m trying to get my game back and every day I’m getting better. I think this is probably the best match I’ve played this year.”

Yoshihito Nishioka of Japan improved his record to 6-3 this year when he rallied to knock off No. 5 seed John Millman of Australia 3-6, 6-4, 6-2 in the other first-round singles match Monday night. Millman became the second seeded player Monday to exit the tournament early, joining No. 7 seed Adrian Mannarino of France, who lost in the afternoon to Korean Soonwoo Kwon.

Nishioka, ranked No. 63 in the world, was noticeably frustrated with his play in the first set, but seemed to be more focused in the second set.

“First set I was just missing (shots),” the 24-year-old said. “Millman is a very tough opponent. I had to move a lot and focus. By the third set I had confidence to get those points. It was very good focus from the second set to the end.”